On April 18, 2010, Fr. Bernardo Francisco de Hoyos, SJ, considered the first apostle of the Sacred Heart in Spain, was beatified in Valladolid... During the Days in the Diocese in Valladolid, I stayed with abbé Daniel Berniquez and Father Tim Mccauley in the Spirituality Centre where he had lived for four years during his studies for the priesthood.


Bernardo Francisco de Hoyos was born in Torrelobatón, a municipality located in the province of Valladolid in Spain on August 21, 1711—that is 300 years to the day of the Vigil and Mass in Madrid Spain—which is part of the background to the request that the Holy Father consecrate the youth of the world to the Sacred Heart, which he did at the close of the tempestuous vigil service and Eucharistic adoration.

The young Bernardo studied in the Jesuit school in Medina del Campo and was so drawn to the Jesuit way of life that, at the age of 14, he wanted to enter the Society of Jesus. Not without difficulty—because of his young age and perceived physical weakness—Bernardo was accepted into the novitiate in 1726.

During his two years as a novice, Aloysius Gonzaga and Stanislaus Kostka, fondly called "boy saints," were canonized. A third "boy saint," John Berchmans, was also in the process of being canonized and provided Bernardo with a model of holiness.

Boy saints—their youth belied their spiritual maturity, a deep and holy wisdom which was also evident in Bernardo de Hoyos. In 1732, at the age of 21, when most of our young men and women are still in adolescence, Bernardo was already able to say to his spiritual director, "I see that everything in my heart is moving towards God, drawn like an iron to a magnet. It desires only God, searches only for God, and longs only for God."

On May 3, 1733, Bernardo experienced the Lord entrusting him with a mission: “I wish you to spread the devotion to my Sacred Heart throughout all of Spain.” From then on, Bernardo did all he could to follow the Lord's command. He formed a group of devoted collaborators to communicate the essence of the devotion to the Sacred Heart to others.

Bernardo himself would distribute prayer cards and leaflets and founded many confraternities and associations in honour of the Sacred Heart. But the best way he spread this devotion was through his own holiness, piety, and personal witness to the love of Christ.

On January 2, 1735, Bernardo was ordained a priest, but not even a year later on November 29, he died after contracting typhus.

At such a young age, Bernardo knew what was in his heart. In these modern times, when youth are distracted by the petty concerns the world presents to them, perhaps we can pray the words of St. Claude de la Colombiere, S.J., another apostle of the Sacred Heart:

O God, what will you do to conquer
the fearful hardness of our hearts?
Lord, you must give us new hearts,
tender hearts, sensitive hearts,
to replace hearts that are made of marble and of bronze.
O holy Heart of Jesus, dwell hidden in my heart,
so that I may live only in you and only for you,
so that, in the end, I may live with you eternally in
heaven. Amen.

One way of making the Sacred Heart devotion real in one’s personal life is to discuss with others how the love of Christ influences our daily life through praying the Morning Offering, through making an effort to attend Mass and Communion on the First Friday of the month, through offering up our hurts and sufferings for the good of the Mystical Body of Christ, the Church (cf. Colossians 1.27).

During the World Youth Day, Jesuits from the United States conducted a program at the English-language Palacio de Deportes stadium (generously provided by the Knights of Columbus) called “Hearts on Fire” which explored the spirituality of the Heart of Christ. 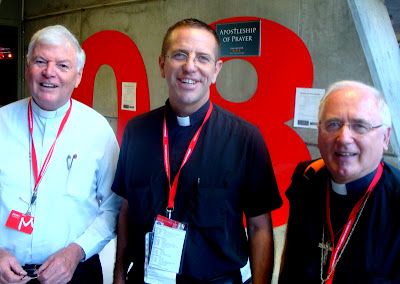 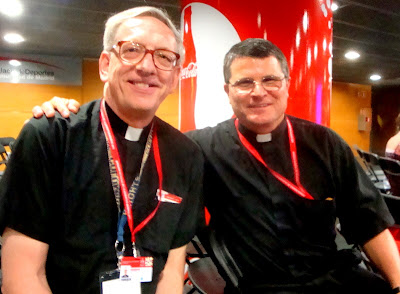 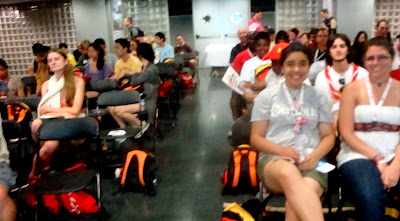 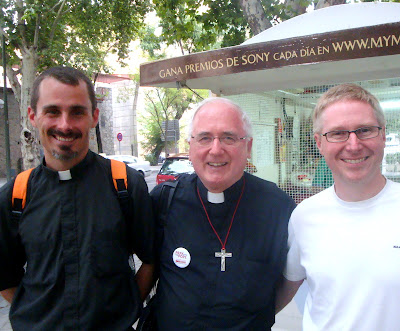 The Morning Offering makes a conscious attempt to join with millions of Catholics throughout the world for the two intentions (general and mission), which the Holy Father has chosen.

The intentions for the month of September 2011 are as follows:

• Teachers. That all teachers may know how to communicate the love of truth and instill authentic moral and spiritual values.

• The Church in Asia. That the Christian communities of Asia may proclaim the Gospel with fervour, witnessing to its beauty with the joy of faith.

This summer I was able to attend the pilgrimage at Lac Ste Anne, west of Edmonton, AB. This is the largest First Nations Catholic gathering in North America. 30,000 people came over a five-day period; this year from July 16-21. Participation is an annual tradition for many Indians, Dene and Metis, with families having gathered there since 1889. Members of my own family have been involved for two decades.

Archbishop Thomas Collins, then of Edmonton, appointed my Uncle Rodney Lorenz as Administrator. Following his term, he continued to work with my relatives running a store selling religious items to the attendees.

The pilgrimage is more than a gathering of families. It is also a deeply spiritual time with several Masses per day hosted by various groups, and Stations of the Cross each evening. These are held at a large outdoor shrine, whose walls are adorned with canes and crutches attesting to miraculous healings in the waters of the lake.

Pilgrims hang hundreds of rosaries on the statue of Ste. Anne. There is a house of healing with priests on hand to deliver the Sacrament of Reconciliation.

A very touching time occurred before a Mass hosted by the Dene. I arrived early and the congregation was saying the Rosary in their own tongue. Even though I couldn't understand the words, I knew the prayers taught to us by our universal church.

Their devotion to our Blessed Mother was inexplicably yet extremely moving. I was also affected by pilgrims of Tlicho First Nation who walked almost 1000 miles from Behchoko, NT: a serious journey compared to my pleasant amble to Santiago de Compostela!

The mission at Lac Ste. Anne was founded in 1844, becoming the first permanent Catholic mission west of Winnipeg. The Oblates of Mary Immaculate (OMI) have served in the area since 1855, and continue to have an important role.

My exposure to the aboriginal peoples recoiled against my preconceptions from the media. It also led me to have fantasies of being an Oblate up in Northern Saskatchewan, embracing poverty and serving Jesus in the bone-cracking cold. But I'm happy to follow my call as a seminarian for the Archdiocese of Ottawa (Rick Lorenz). 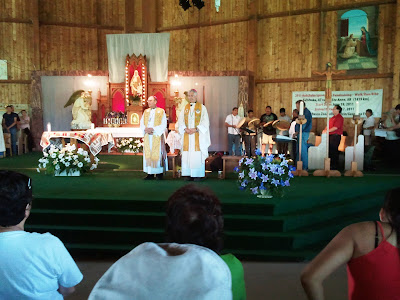