Yesterday, the Annual Red Mass was celebrated at Notre Dame Cathedral for members of the judiciary, legal profession, legislators, etc.

Here is a photo taken on the steps of the Basilica following the Mass (courtesy of Deborah Gyapong), followed by the text of my homily: 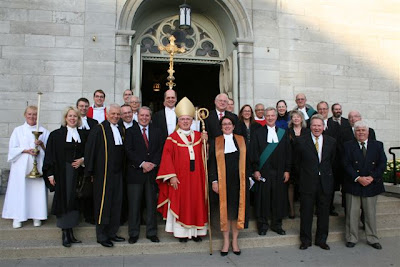 Red Mass – Votive of the Holy Spirit
Notre Dame Cathedral, Ottawa--22nd September 2011
[Haggai 1.1-8; Psalm 149: “The Lord delights in his people”; Luke 9.1-9]
In the Red Mass we invoke the gifts of the Holy Spirit – minds illumined by the Spirit of wisdom, hearts strengthened by the Spirit of courage – upon those who work in the law courts, the legal profession, the broader justice system, and, in a particular way in the nation’s capital, upon those who legislate in Her Majesty’s name for the common good of the Canadian people.

In a happy gift of Providence, this evening the Red Mass is being offered in St. Michael’s Cathedral in Toronto, and in Holy Rosary Cathedral in Vancouver. Across this broad land, we call down the power of the Holy Spirit, that it may renew the face of this land, where the Lord holds dominion from sea to sea.

What is the Spirit saying to the Church and to the world this evening, particularly the legal world? In the passage from Luke just read, the Lord Jesus sends out the Twelve to preach the Gospel, assuring them that they need not rely on earthly provision, but on God’s Providence for their mission. We can glimpse the beginnings of the Church’s mission to the world, that Jesus sends His followers into all the town and cities, to bear witness to all who live there.

Such Christian witness is not easy when there are many voices which say that it is somehow out of bounds for Christians to behave as such in the public square. It is not easy, but filled with the gifts of the Holy Spirit, the Christian today must have the wit, the wisdom, and the courage to do just that. Let me put it to you more strongly still: If those who enjoy prestige and power in our society – judges, lawyers, Members of Parliament and Senators – give a weak witness to their faith, what model does that offer for the many others who look up to you and aspire to follow you?

This Christian witness attracts attention, as St. Luke tells us: Herod the tetrarch heard about all that was going on … And he desired to see [Jesus].

In the attitude of Herod, a man of public authority and not a follower of Jesus, we can see something of the attitudes of the state to the Christian faith. Herod had executed an innocent man, John the Baptist, because he dared to speak the truth about marriage. Herod’s father had ordered the slaughter of the innocent boys of Bethlehem to eliminate a perceived rival power. So we see that the fearsome power of the state can be unleashed against men and women of faith, which takes place around the world even to this day. Yet Herod is also intrigued, and he wants to see Jesus, perhaps just out of curiosity about all that is going on, but more likely because he intuits that this Jesus of Nazareth may just have something interesting to say about our common life together.

Our common life, our parliamentary and legal life, does need the contribution of faith. The law can mete out harsher punishments, but even the harshest punishment cannot convert a heart. Legislators and judges both ought to know that, for example, prisoners are more likely to be rehabilitated if their hearts are touched by faith even if their bodies are kept in prison. More broadly, the whole construct of our democratic institutions requires a foundation deeper than it can provide for itself. Democratic procedures need to be grounded in a vision of the human person which can sustain them. Politics and the law cannot generate this vision without reference to the transcendent which lies beyond their competence. Politics and the law need the contribution of the world of faith and, in our Canadian context, the particular contribution of the Christian vision of the human person. The rule of law needs the world of faith.

This year the Catholic Church rejoiced in the beatification of Pope John Paul II, who made this argument persuasively not only against the totalitarian tyrants of his time, but against those who strip our common life in the West of its religious dimension. He wrote these strong words twenty years ago:

“Authentic democracy is possible only in a State ruled by law, and on the basis of a correct conception of the human person. Nowadays there is a tendency to claim that agnosticism and sceptical relativism are the philosophy and the basic attitude which correspond to democratic forms of political life. Those who are convinced that they know the truth and firmly adhere to it are considered unreliable from a democratic point of view, since they do not accept that truth is determined by the majority, or that it is subject to variation according to different political trends. It must be observed in this regard that if there is no ultimate truth to guide and direct political activity, then ideas and convictions can easily be manipulated for reasons of power. As history demonstrates, a democracy without values easily turns into open or thinly disguised totalitarianism.” (Centesimus Annus #46)

As this parliament and the courts open anew in these weeks, may the Holy Spirit guide you in your work.

All mighty ever-living God, who, by a singular grace, gave the Priest Saint Pius a share in the Cross of your Son and by means of his ministry renewed the wonders of your mercy, grant that, through his intercession, we may be united constantly to the sufferings of Christ, and so brought happily to the glory of the resurrection. Through our Lord. 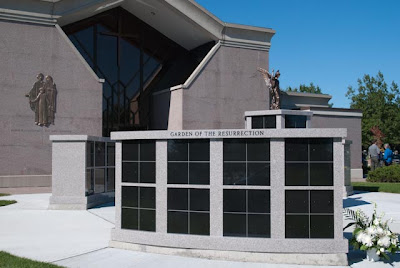 On Sunday, September 18, a bright sunny day, several hundred people attended the blessing of the new Jardin de la Resurrection/Garden of the Resurrection columbarium area (in front of Holy Family Mausoleum, which recently acquuired a new representation of Jesus, Mary and Joseph). 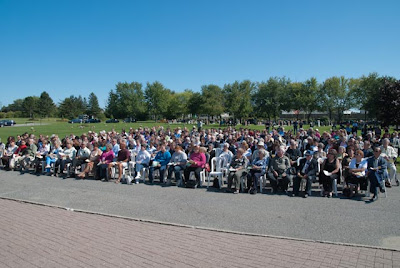 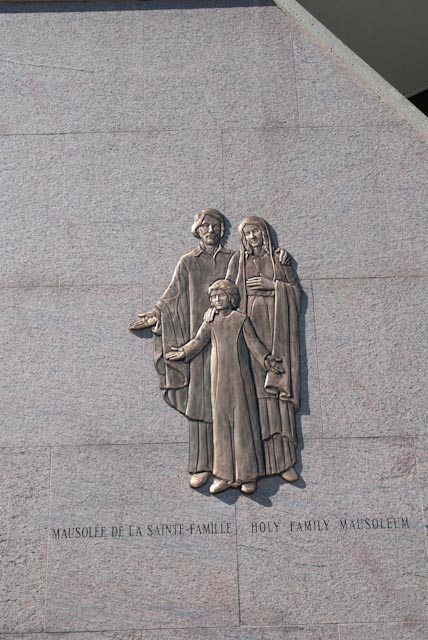 Here is the bilingual prayer of blessing, followed by several photos of the Liturgy of the Word service, the Blessing of the Columbarium, Greeting of the Faithful and Reception under the awning:
Prayer of Blessing for a Columbarium
Bénédiction d’un nouveau columbarium
God of endless ages, through disobedience to your law we fell from grace and death entered the world; but through the obedience and resurrection of your Son you revealed to us a new life.


You granted Abraham, our father in faith, a burial place in the promised land; you prompted Joseph of Arimathea to offer his own tomb for the burial of the Lord.


In a spirit of hope we earnestly ask you to look upon this columbarium and bless it + so that, while we commit to their resting places the earthly remains of our brothers and sisters, their souls may be taken up into paradise.


May this become a sacred shrine, a place of pilgrimage to remind us of what we already believe: that life is transformed into new life; and that all the holy dead shall rise in the splendor of your glory to live with you for ever and ever. 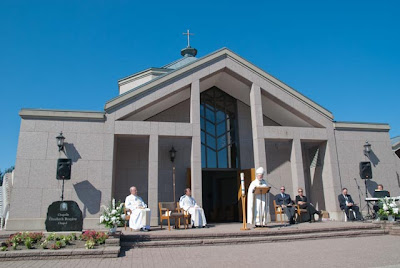 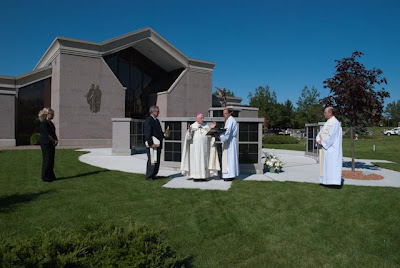 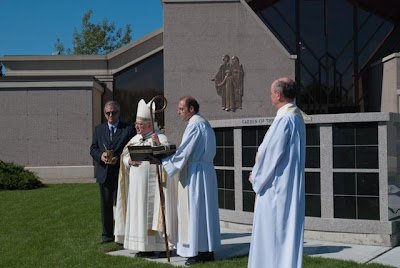 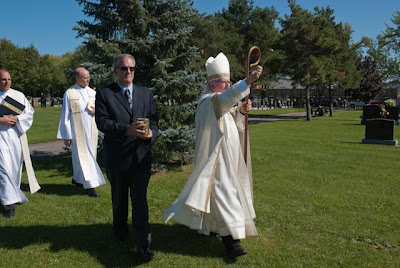 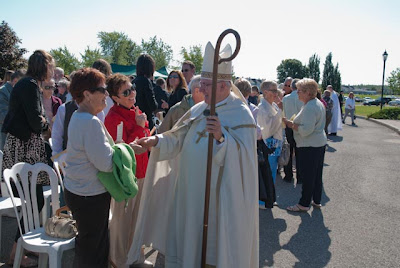 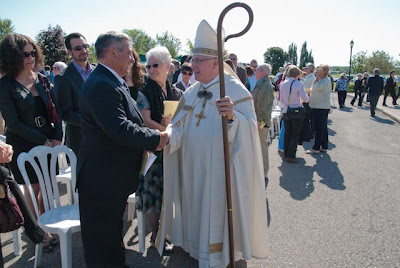 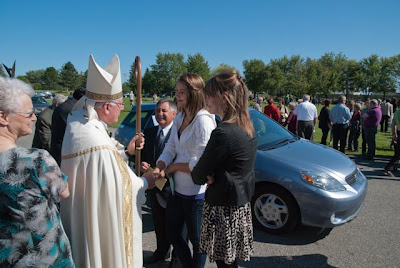 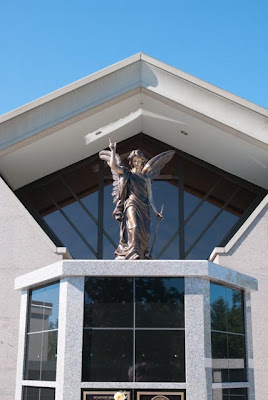 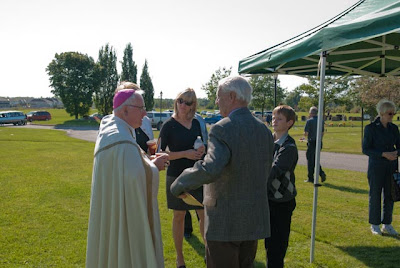