O God, who chose to manifest the blessed hope of your eternal kingdom by the toil of Saint John the Brebeuf, Isaac Jogues and their companions and by the sheding of their blood,  grant graciously that, through their intercession, the faith of Christians may be strengthened day by day. Through our Lord. 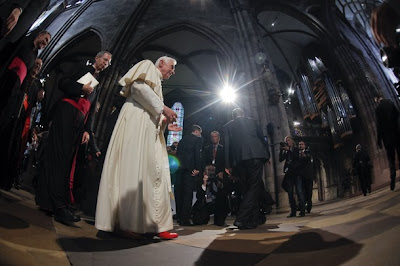 The Church’s mission has its origins in the mystery of the triune God, in the mystery of his creative love. Love is not just somehow within God, he himself is love by nature. And divine love does not want to exist in isolation, it wants to pour itself out. It has come down to men in a particular way through the incarnation and self-offering of God’s Son. He stepped outside the framework of his divinity, he took flesh and became man; and indeed his purpose was not merely to confirm the world in its worldliness and to be its companion, leaving it completely unchanged. The Christ event includes the inconceivable fact of what the Church Fathers call a commercium, an exchange between God and man, in which the two parties – albeit in quite different ways – both give and take, bestow and receive. The Christian faith recognizes that God has given man a freedom in which he can truly be a partner to God, and can enter into exchange with him. At the same time it is clear to man that this exchange is only possible thanks to God’s magnanimity in accepting the beggar’s poverty as wealth, so as to make the divine gift acceptable, given that man has nothing of comparable worth to offer in return.

The Church likewise owes her whole being to this unequal exchange. She has nothing of her own to offer to him who founded her. She finds her meaning exclusively in being a tool of salvation, in filling the world with God’s word and in transforming the world by bringing it into loving unity with God. The Church is fully immersed in the Redeemer’s outreach to men. She herself is always on the move, she constantly has to place herself at the service of the mission that she has received from the Lord. The Church must always open up afresh to the cares of the world and give herself over to them, in order to make present and continue the holy exchange that began with the Incarnation.

In the concrete history of the Church, however, a contrary tendency is also manifested, namely that the Church becomes settled in this world, she becomes self-sufficient and adapts herself to the standards of the world. She gives greater weight to organization and institutionalization than to her vocation to openness.

In order to accomplish her true task adequately, the Church must constantly renew the effort to detach herself from the “worldliness” of the world. In this she follows the words of Jesus: “They are not of the world, even as I am not of the world” (Jn 17:16). One could almost say that history comes to the aid of the Church here through the various periods of secularization, which have contributed significantly to her purification and inner reform.

Secularizing trends – whether by expropriation of Church goods, or elimination of privileges or the like – have always meant a profound liberation of the Church from forms of worldliness, for in the process she has set aside her worldly wealth and has once again completely embraced her worldly poverty. In this the Church has shared the destiny of the tribe of Levi, which according to the Old Testament account was the only tribe in Israel with no ancestral land of its own, taking as its portion only God himself, his word and his signs. At those moments in history, the Church shared with that tribe the demands of a poverty that was open to the world, in order to be released from her material ties: and in this way her missionary activity regained credibility.

History has shown that, when the Church becomes less worldly, her missionary witness shines more brightly. Once liberated from her material and political burdens, the Church can reach out more effectively and in a truly Christian way to the whole world, she can be truly open to the world. She can live more freely her vocation to the ministry of divine worship and service of neighbour.
The missionary task, which is linked to Christian worship and should determine its structure, becomes more clearly visible. The Church opens herself to the world not in order to win men for an institution with its own claims to power, but in order to lead them to themselves by leading them to him of whom each person can say with Saint Augustine: he is closer to me than I am to myself (cf. Confessions, III, 6, 11). He who is infinitely above me is yet so deeply within me that he is my true interiority. This form of openness to the world on the Church’s part also serves to indicate how the individual Christian can be open to the world in effective and appropriate ways.

It is not a question here of finding a new strategy to relaunch the Church. Rather, it is a question of setting aside mere strategy and seeking total transparency, not bracketing or ignoring anything from the truth of our present situation, but living the faith fully here and now in the utterly sober light of day, appropriating it completely, and stripping away from it anything that only seems to belong to faith, but in truth is mere convention or habit.
To put it another way: for people of every era, not just our own, the Christian faith is a scandal. That the eternal God should know us and care about us, that the intangible should at a particular moment have become tangible, that he who is immortal should have suffered and died on the Cross, that we who are mortal should be given the promise of resurrection and eternal life – to believe all this is to posit something truly remarkable. 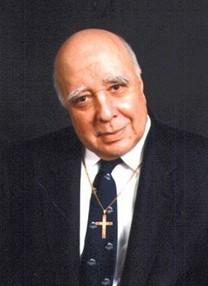 This summer through a variety of circumstances, I missed learning until recently of the death on July 31 (St. Ignatius Day) of Father George Hoffmann, the last living Jesuit of the four priests who had interviewed me for entrance into the Society of Jesus in 1961(the others were Fathers John Cass, Patrick G Malone and Thomas “Pops” Moylan).
On Saturday in Edmonton one of the participants in SCRIPTUREFEST spoke to me of the positive impact Father Hoffmann had had on his faith education at Loyola College, so I resolved to give a brief report in coming days.  As Father George was ordained at the Martyrs Shrine, their feast today seems an appropriate occasion to speak of a man who, except in recent years when he was reclusive, was regularly a man of encouragement to me.
Here are some details of his life and passing:
GEORGE R. HOFFMANN, S.J. died peacefully on July 31, 2011 at Pickering, Ontario at the age of 87 and having passed 69 years in Jesuit life.
Father Hoffmann was born in Munich, Germany on March 28, 1924 and entered the Society of Jesus at Guelph on July 30, 1942.
Ordained a priest on June 19, 1955 at Martyrs' Shrine in Midland, Ontario, he served as a professor of philosophy and theology at Loyola College, Montreal and Saint Mary's University, Halifax, then provided pastoral care at Manresa Retreat House in Pickering and at the Martyrs' Shrine in Midland, Ontario.
His funeral took place on August 3 at 11 o'clock in the St. Ignatius Manresa Chapel, Pickering, and interment followed that afternoon in the Jesuit Cemetery, Guelph, Ontario.
Requiescat in pace
Posted by Archbishop Terry at 6:53 AM