The Glorious Cross - Sunday 25A: The Parable of the Vineyard Workers 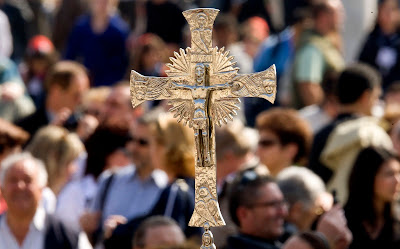 Collect of the Exaltation of the Holy Cross
O God, who willed that your Only Begotten Son should undergo the Cross to save the human race, grant, we pray, that we who have known his mystery on earth may merit the grace of his redemption in heaven. Through our Lord.
* * * * * *


Twenty-fifth Sunday in Ordinary Time (Year "A") - September 18, 2011
“ARE YOU ENVIOUS BECAUSE I AM GENEROUS?”
[Texts: Isaiah 55.6-9 [Psalm 145]; Philippians 1.20-24, 27; Matthew 20.1-16]
Years ago I was thoroughly engrossed by a film titled, “The Company of Strangers”.  It narrated the interactions among eight women—seven of them seniors and an eighth young woman who served as their bus driver—which took place on an outing in the countryside.  In the course of the daylong episodes and misadventures, we filmgoers were invited to share in the lifetime hopes and fears, labours and joys of people with whom we could relate.
The women in the story were delightedly down to earth people, with feelings sitting very close to the surface of their lives.  I imagine that, like myself, others in the theatre that evening were invited to feel with and for the characters we were encountering.  Film director and producer, actors and technicians had marshalled all their energies so that we would be touched by what we saw and felt during the unfolding of a picaresque tale.  Such is the goal of every skilled teller of tales.


Through the gospel traditions he left Jesus remains for those who hear him through the ages an extraordinary storyteller.  His parables are able to move their hearers today as they did during his ministry on earth.  Christ's subject matter is the .  It is a mysterious reality whose contours remain elusive, a dynamic process rather than a static entity (“the is like a landowner...” and all that happened on a particular day).
In the course of the ten remaining Sundays of this liturgical year, Christian disciples will hear Jesus tell parables on six occasions and engage in controversies on three others.  All of these dynamic words lead up to the dramatic conclusion to Jesus' teaching in Matthew's gospel, a preview of the Last Judgment on the Solemnity of Christ the King.

The parables of two sons, of the tenants in a vineyard, of the wedding banquet, of ten bridesmaids and three servants challenged to trade with talents entrusted to them should provoke and shock, cajole and challenge.  And, if one truly listens to today's parable—shall we call it the parable of the generous owner or the parable of equal pay for unequal work?—it may enrage hearers today as it has in past centuries.

For the parable deals with human experiences in the sweaty world of work, of unemployment and subsistence pay, and of money and the feelings that it evokes in those who compare what they have with what others have.  Economic realities, inequities real or perceived, justice and gratuity leave very few people indifferent.
Instinctively, people identify and sympathize with those who worked all day in the vineyard but complained when they were given the same wages as those who worked only one hour.  As with the first century workers, readers today think the vineyard owner was “unfair”, even if they cannot say he was “unjust” (“Friend, I am doing you no wrong; did you not agree with me for the usual daily wage?”)

And Jesus wants to stir up just such feelings.  For he wants to change how human minds think about God, about the world in which they live and work, and even about themselves.  Earlier in salvation history the prophet Isaiah had declared on God's behalf, “My thoughts are not your thoughts, nor are your ways my ways”.

Jesus reiterated that truth, saying that in God's economy of grace “the last will be first and the first last”.  When Jesus first used a version of this divine principle of reversal (“any who are first will be last, and the last will be first”)—in the verse immediately preceding the parable (Matthew 19.0)—it was to comfort disciples who had left all things for the sake of the Kingdom that they would be blessed with new family members and possessions in the “renewal of all things”.

Here, disciples are asked to see that belonging to the is not an achievement of theirs, though their labours are needed.  Rather, and fundamentally so, it is God's generosity that constitutes the overarching dimension of the Kingdom.  Within that perspective, envy of how good God has been to others must yield to praise of God that one has been permitted to share in the Kingdom.
Posted by Archbishop Terry at 7:06 AM