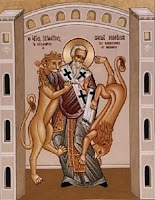 St. Ignatius, Bishop of Antioch, was a disciple of St. John the Evangelist. St. Peter himself appointed him as bishop; he proved to be an exemplary pastor for over 40 years.

Born in Syria, Ignatius converted to Christianity and eventually became bishop of Antioch. In the year 107, Emperor Trajan visited Antioch and forced the Christians there to choose between death and apostasy. Ignatius would not deny Christ and thus was condemned to be put to death in Rome, devoured by wild beasts.

His journey came to an end in 107 when he arrived in Rome. He was at once hurried off to the Coliseum for his cruel execution. Two fierce lions, that were kept starving for several days, devoured him immediately. His few remaining bones are now presently venerated in Rome among the most precious relics there.

Ignatius wrote his seven letters on the long journey from Antioch to Rome. Five of these letters are to Churches in Asia Minor; they urge the Christians there to remain faithful to God and to obey their superiors. He warns them against heretical doctrines, providing them with the solid truths of the Christian faith.

The sixth letter was to Polycarp, bishop of Smyrna, who was later martyred for the faith.

St Ignatius wrote to them saying: "Let me be food for the wild beasts, for they are my way to God. I am God's wheat and shall be ground by heir teeth so that I may become Christ's pure bread".

Ignatius's great concern was for the unity and order of the Church. Even greater was his willingness to suffer martyrdom rather than deny his Lord Jesus Christ. Not to his own suffering did Ignatius draw attention, but to the love of God which strengthened him. He knew the price of commitment and would not deny Christ, even to save his own life.

"I greet you from Smyrna together with the Churches of God present here with me. They comfort me in every way, both in body and in soul. My chains, which I carry about on me for Jesus Christ, begging that I may happily make my way to God, exhort you: persevere in your concord and in your community prayers" (Ignatius of Antioch, Letter to the Church at Tralles).
Posted by Archbishop Terry at 7:17 AM