The Church in Canada today observes the liturgical memorial of Blessed Marie-Rose Durocher (1811-1849).

Eulalie Durocher was born Born October 6, 1811 at St. Antoine (a small village near Montreal) in Quebec the tenth of eleven children. At the age of 16she felt she had a vocation to the religious life, but was turned away because of her frail health. At eighteen, following the death of her mother, her priest brother invited her and her father to come to his parish which was not far from Montreal. For twelve years she served as his housekeeper and facilitator of pastoral activities. In this capacity, she became known for her graciousness, her gift of hospitality, and her leadership skills. This position also opened her eyes to the great need for instruction of youth - especially for young women who received very little education at that time in our country.

It was Eulalie's dream that every parish be blessed with an order of teaching sisters, although she never imagined that she would be the founder due to her poor health and family responsibilities.

However, with the encouragement of both her spiritual director and at the request of Bishop Bishop Ignace Bourget, she went to Longueuil to found the Sisters of the Holy Names of Jesus and Mary with her companions Henriette Cere and Melodie Dufresne. On December 8, 1844, she made her religious profession, taking the name Sister Marie Rose.

The Sisters of the Holy Names of Jesus and Mary were dedicated to providing Christian education for the poor and the neglected. Today, the congregation's mission continues here in Canada, in the United States, Africa, Haiti, and South America with 1385 religious and 561 associates.

GETTING READY FOR THANKSGIVING DAY...

In a spirit of gratitude, we give thanks to God today for the gift of Brussels sprouts 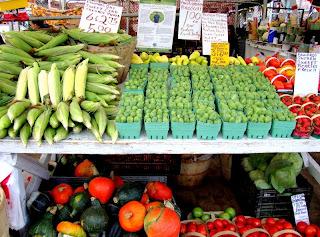 "LIFE CHAIN," THEN DEPARTURE FOR TORONTO

Sunday was a busy day with a visit to St. Bernardin Parish in the morning (a report on this will follow in the weekly wrap-up on the Visitation of Parishes, probably on Thursday). 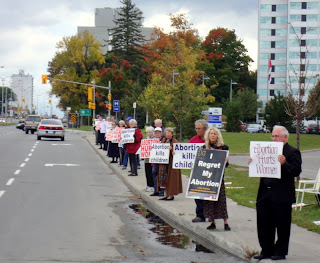 The trip in to Ottawa from the eastern region was in a light ran which let up and held off in Ottawa for those who took part in the witness to life at several locations in the National Capital Region.

In my case, I joined with with Anglican Catholic Bishop Carl Reed, several consecrated women, Fr. Tim Devine of the Companions of the Cross and a wide cross-section of laity from school children, teenagers, young adults, family members and some of our devout elderly who have witnessed in this way for many years. 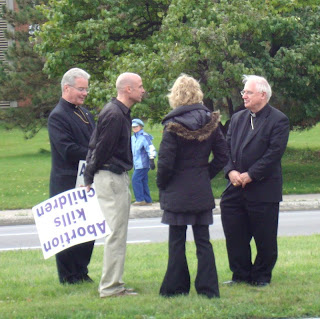 On Carling Avenue in front of the Civic Hospital where abortions are performed, there is a good deal of traffic. The silent prayerful witness (we held placards of various kinds for passing cars and bus passengers to view) elicited signs of encouragement (thumbs up, gentle tooting) and also of opposition (loud horn honking and comments).

But if one or more hearts were changed by this exercise, the demonstration will, humanly speaking, have been worth the effort. And even if no heart was moved towards life, our prayers will have been pleasing to God and, in His time not ours, the fruits will become manifest to his praise and glory, with the result of effecting peace in people's lives.

Perhaps only our hearts will have been changed by being enlarged to God's purposes. In any case, to God alone be the glory!

The Ottawa Seminarians from St. Augustine's Seminary (Hermy-Jasmin, Hezuk and Matthew) met my flight at Pearson Aiport and we drove to St. Philip's Seminary in Parkdale to pick up Jonathan.

We all headed to the area of Bloor and Bathurst near the Cardoner Jesuit Community, which is offering me hospitality these days and where a restaurant specializing in Thai food had been selected. 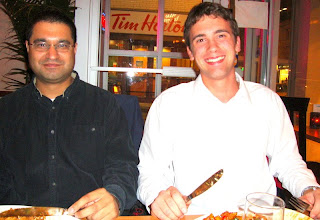 The Annex and plays home to many business and food emporia of various kinds. While I am hardly an afficionado of Oriental cuisine, young people today are quite adventurous and some well versed in international cuisine, so the sems help their bishop experiment and I found the food we chose quite tasty!

We went to a bakery-cafe nearby for dessert, then I showed them around the public rooms in the house and we sang the "Salve Regina" in the chapel. As I headed for bed, they went in the direction of St. Philip's to arrive in time for sung Compline at 10PM, then back to Scarborough before lights out.

The Ottawa sems are developing a good sense of teamwork (something the Senators are working at and our politicians can learn...) and that makes me proud of them.

Please keep them in your prayers--that they persevere in following God's--and pray that Our Lord will inspire many to follow the path to the priesthood with them. 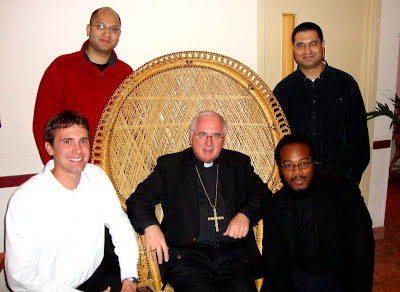