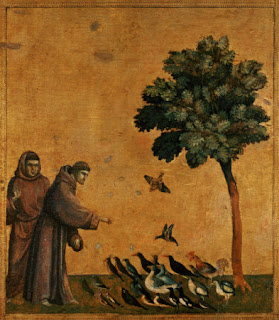 Though it is not observed liturgically this year since it falls on the Lord's Day, many will be marking St. Francis of Assisi's memorial because he is one of the saints best loved on earth, even by non-Catholics.

Happy Feast of Francis of Assisi by those who will participate in para-liturgical events on this day, such as the blessing of animals. Featuring the painting by Giotto of Francis preaching to the birds, his sermon is offered below in an ancient English translation.

Saint Francis of Assisi (1182-1226) was born into a wealthy family at Assisi, Italy, the son of a cloth merchant. Francis received little formal education and during his youth was mostly preoccupied with having fun. As a young man, he was popular, charming, enjoyed practical jokes and was usually the life of the party.

Because of his wealth, he generally picked up the tab and thus attracted a following of fun loving, rowdy young men and promiscuous women.

When armed conflict broke out between the men of Assisi and a neighboring city in 1202, Francis eagerly volunteered for the cavalry but wound up getting captured in the first big battle and spent a year in captivity.

Francis returned to Assisi hailed as a hero, but unknown to his friends he had undergone a transformation in his outlook during his captivity. Although he was once again the life of the party, he was now questioning his reason for existence.

After much contemplation, including vivid dreams and mystic visions, he turned away from the pursuit of all worldly pleasures, sold all his property and donated the money to the Church. He then began a lifelong passion of caring for society's castoffs, the sick and poor, including lepers.

His wealthy father reacted to his son's new lifestyle by disinheriting him. Thus Francis lived in utter poverty and even went without shoes. But his humbleness, extraordinary kindness and love for humanity attracted the attention of other young men and they also chose to give up worldly pleasures and follow him to spread the gospel and serve the poor.

Eventually, as the brotherhood grew, its members traveled to other parts of Europe to preach, including France, Germany, Spain and England.

A separate order for women was formed, now known as the Franciscan Nuns or Poor Clares, under the leadership of St. Clare of Assisi.

Francis had much love for animals with special fondness for the birds. He liked to refer to animals as his brothers and sisters. Legend has it that wild animals had no fear of Francis and even came to him seeking refuge from harm.

In 1224, Francis went up onto a mountain and began a 40-day fast. During that time he is said to have had a miraculous vision and received the marks of the nails and spear exactly as they appeared on the body of Jesus during his crucifixion (the stigmata, from a Greek word).

After his death in 1226, Francis was declared a saint by Pope Gregory IX. For several centuries now, his Franciscan order has experienced continuous growth and is still active today caring for the poor, educating youth, and performing many other good deeds.

My little sisters, the birds, much bounden are ye unto God, your Creator, and always in every place ought ye to praise Him, for that He hath given you liberty to fly about everywhere, and hath also given you double and triple rainment; moreover He preserved your seed in the ark of Noah, that your race might not perish out of the world; still more are ye beholden to Him for the element of the air which He hath appointed for you; beyond all this, ye sow not, neither do you reap; and God feedeth you, and giveth you the streams and fountains for your drink; the mountains and valleys for your refuge and the high trees whereon to make your nests; and because ye know not how to spin or sow, God clotheth you, you and your children; wherefore your Creator loveth you much, seeing that He hath bestowed on you so many benefits; and therefore, my little sisters, beware of the sin of ingratitude, and study always to give praises unto God. (St. Francis of Assisi, about 1220). 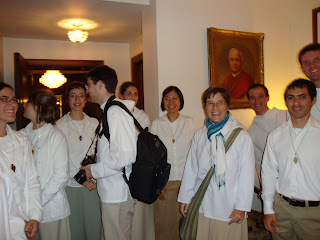 Some eighty members of Famille Marie-Jeunesse were in Ottawa to bid farewell to Archbishop Luigi Ventura, our Nuncio for the last eight years who has been transferred to France to serve there as the Holy Father's representative.

After Mass, sandwiches, songs and some tears, the flottila of white cars and vans, having done their duty on Vatican property dropped by to pay their respects to the Archbishop of Ottawa. I gave them a tour of the residence, they caught a brief visit to the Cathedral between Saturday afternoon weddings, and we all posed for a few pictures. I also did a brief video message for their upcoming Marian weekend with teachings for youth on consecrating themselves to Mary, our Blessed Mother. 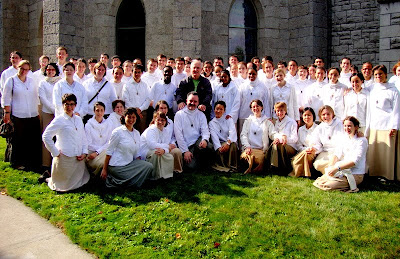 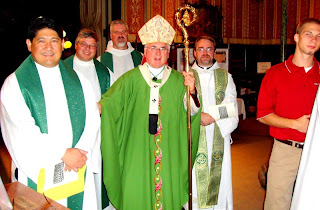 This evening the three travelling teams and two parish-based teams (one in the Archdiocese of Edmonton, the other in the Kingston Archdiocese) of NET (National Evangelization Teams) Canada came to the Cathedral Basilica for Mass and a Missioning Service at the close. One of the travelling teams will operate predominantly in French and so their golf-shirts are emblazoned with a Les Equipes NET logo. There is, in addition a music ministry team (Massive Worship) that will spread the gospel through music for half a year (until the end of December).

Both Famille Marie-Jeunesse and NET Canada/Les Equipes NET offer hope for our church and our country at this critical time.

The NET Ireland teams, which used to have their mission-sending ceremony with NET Canada (as they train together), has been moving towards greater independence and so their commissioning has taken place in Ireland.

Today I visit Paroisse St-Bernardin in the town of the same name, take part in the Life Chain this afternoon, then fly to Toronto for the fall meeting of the Assembly of the Catholic Bishops of Ontario, dining with Ottawa's seminarians this evening. Blogging will necessarily be reduced in coming days.
Posted by Archbishop Terry at 6:39 AM