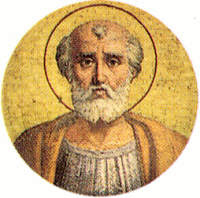 A Christian slave of Rome, Callistus was ordained deacon by Pope St. Zephyrinus, whom he succeeded as pope in the year 217. As deacon he was guardian of the Christian cemetery on the Appian Way which is still known by his name. While he vigorously opposed heresy, his charitable attitude toward repentant sinners incurred the wrath of contemporary rigorists.

He defended the faith against the Adoptionist and Modalist heresies regarding the Holy Trinity and the Person of Jesus Christ. Under the reign of Alexander Severus, he was thrown into prison, and then was tortured by starvation in prison and scourged daily. Finally Callistus was thrown from a window of the house headlong into a well, where he drowned. Callistus died a martyr on October 14, 223. 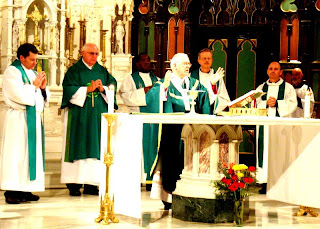 A half dozen priests joined me and more than 200 faithful at a Mass of intercession for the cause of life and thanksgiving for graces received in the first half of this fall's observance (prayer, fasting, vigil in front of the Ottawa abortion clinic).

Anglican Catholic Bishop Carl Reed was in attendance in the sanctuary and spoke briefly at the close of Mass (eliciting loud and sustained applause when he voiced his church's desire for full communion with Rome). 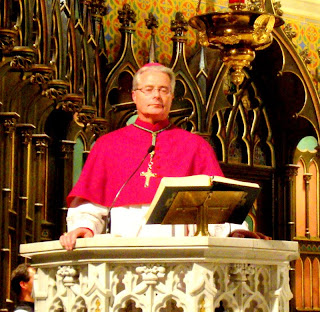 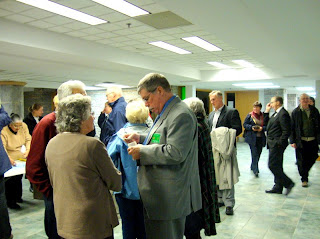 Regis College holds a special place in my life and in my heart. I spent six happy years as a student from 1969-75 and was associated with it for fourteen additional years (1981-95) while serving as professor of New Testament and terms as Rector of the College (1981-87) and Dean of Theology (1990-1995).

The Seminary of Christ the King (Collegium Christi Regis), begun as a formation house for Jesuits preparing for the priesthood in 1931, now Regis College, has been located at several locations in Toronto: at 403 Wellington Street (where the Globe and Mail building now stands) from 1931-1961; at 3425 Bayview Avenue in Willowdale (1961-1976); and at 15 St. Mary Street from 1976-2009.

Recently the College, a federated institute within the Toronto School of Theology--itself associated with the University of Toronto--that has welcomed other religious, seminarians and lay students for many years now, transferred its operations to the former St. Joseph's College, a residence for women students at 100 Wellesley Street West, with a second entrance on Queen's Park Crescent East.

While in Toronto last week for the ACBO Fall Plenary, I received a guided tour of the new facilities--partially opened and partially still under construction--by Father Gilles Mongeau, S.J., professor of systematic theology as well as director of the Basic Degree Program and the Lonergan Research Institute.

Herewith some photos of the College, whose members are hoping to be fully ensconced by their titular feast, the Solemnity of Christ the King (November 22 this year). 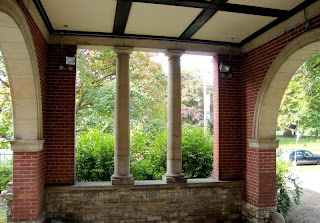 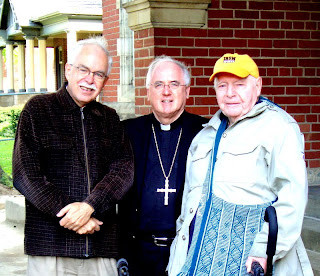 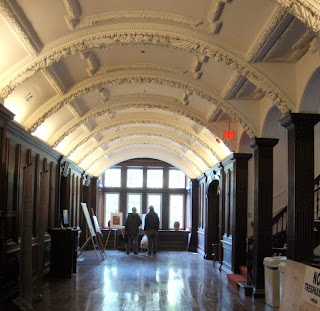 A striking hallway; there are classrooms to the left, offices to the right 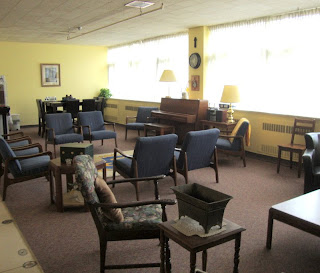 The new student lounge outside the lower-level library

Through a corridor window, Father Michael Kolarcik is seen lecturing on the Psalms 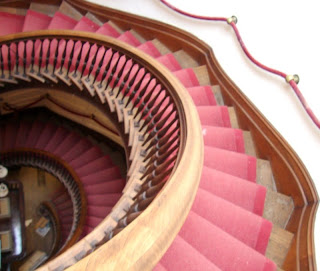 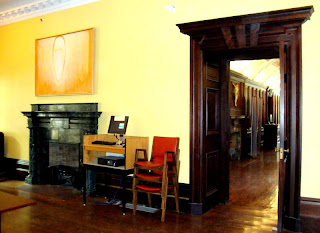 A scene from a first floor passageway 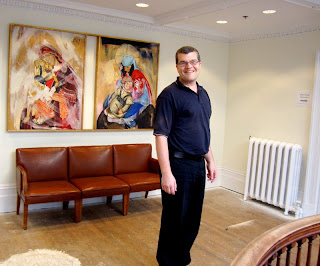 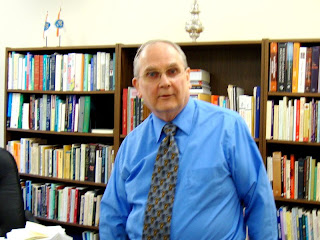 A fellow novice (we entered on August 14, 1961), Father Joseph Schner is Regis President 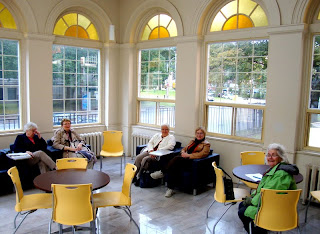 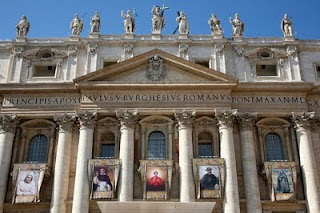 From my youth, when I first heard the story of Father Damien of Molokai, I considered his heroism saintly, so I was pleased to learn that he has been raised to the altars. In his homily, the pope referred to the Scriptures of the day and showed how they were fulfilled in the new saints. The whole text, as with all the Holy Father's homilies, is worth meditation. Here, I have excerpted the parts that deal particularly with Father Damien:

"What must I do to inherit eternal life?" This is the question that opens the brief dialogue we heard in the Gospel, between a man, identified elsewhere as the rich young man, and Jesus (cf Mk 10:17-30). We do not have very many details about this nameless character: all the same from the little we do have we are able to perceive his sincere desire to attain eternal life by living an honest and virtuous existence on earth. In fact he knows the commandments and has obeyed them since childhood.

And yet all of this, while important, is not sufficient -- says Jesus -- there is one thing missing, but it is an essential thing. Seeing then that he is willing, the Divine Master looks at him with love and proposes the qualitative leap, he calls him to the heroism of sanctity, he asks him to abandon everything and follow him: "Sell what you own and give the money to the poor...then come, follow me!" (V. 21).

"Then come, follow me!" This is the Christian vocation that flows from a proposal of love by the Lord, and that can be realized only thanks to our loving reply. Jesus invites his disciples to the total giving of their lives, without calculation or personal gain, with unfailing trust in God.

The saints welcome this demanding invitation and set about following the crucified and risen Christ with humble docility. Their perfection, in the logic of a faith that is humanly incomprehensible at times, consists in no longer placing themselves at the center, but choosing to go against the flow and live according to the Gospel. This is what was done by the five saints who today, with great joy, are being put forward for veneration by the universal Church: Zygmunt Szczęsny Feliński, Francisco Coll y Guitart, Jozef Damiaan de Veuster, Rafael Arnáiz Barón, Marie de la Croix (Jeanne) Jugan.

In them we can contemplate the realization of the words of the Apostle Peter: "Look, we have left everything and followed you" (V. 28) and the consoling reassurance of Jesus: "There is no one who has left house, brothers, sisters, mother, father, children or land for my sake and for the sake of the gospel who will not receive a hundred times as much...and persecutions too, now in this present time and, in the world to come, eternal life" (VV. 29-30).... 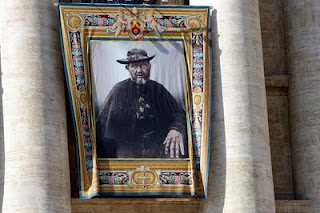 Jozef De Veuster, who in the Congregation of the Sacred Hearts of Jesus and Mary received the name of Damiaan, when he was twenty-three years old, in 1863, left his home in Flanders to proclaim the Gospel on the other side of the world, the Hawaiian Islands.

His missionary activity, which gave him so much joy, reaches its summit in charity. Not without fear and repugnance, he chose to go to the Island of Molokai to serve the lepers who were there, abandoned by all; thus he exposed himself to the disease they suffered from. He felt at home with them. The Servant of the Word thus became a suffering servant, a leper with lepers, during the last four years of his life.

To follow Christ, Father Damiaan did not only leave his native country, but he also risked his health: therefore he received eternal life, as the Word of Jesus that was proclaimed in the Gospel today says (cfr. Mk 10:30).

On the 20th anniversary of the canonization of another Belgian saint, Brother Mutien-Marie, the Church in Belgium has gathered once again to give thanks to God for one of its sons recognized as an authentic servant of God. We recall, faced with this noble figure, that charity makes unity: it gives birth to it and makes it desirable.

In following Saint Paul, Saint Damien leads us to choose the good battle (cf. 1 Tim 1:18), not those that lead to division, but those that gather together. He invites us to open our eyes to the lepers that disfigure the humanity of our brothers and today still calls, more than for our generosity, for the charity of our serving presence....

Dear brothers and sisters, let us give thanks to the Lord for the gift of sanctity that today shines in the Church with a singular beauty. While I salute each of you affectionately - Cardinals, Bishops, civil and military authorities, priests, religious, faithful lay people of different nationalities who are taking part in this solemn Eucharistic celebration - I would like to invite all of you to let yourselves be drawn by the shining example of these Saints, to allow yourselves to be guided by their teachings, so that our whole existence can become a hymn of praise to the love of God.

May we gain this grace through their heavenly intercession and, above all, the maternal protection of Mary, Queen of the Saints and Mother of humanity. Amen.
Posted by Archbishop Terry at 6:38 AM