Yesterday was a quiet afternoon visit to two rural parishes, one on the far western edge of the Archdiocese (St. Michael's, Corkery) and one just inside Lanark County, (St. Peter Celestine, Pakenham).

Fr. Michael Ruddick, ordained in June 2003 has been pastor for the last several years. He received me at his rectory in Corkery and with delight showed me his two beautiful churches, the well-kept cemetery across from St. Michael's Church.

After a short drive we stood in awe at the beautifully-appointed and maintained church in a town where one crosses on a five-span bridge, enjoys the hospitality of the parishioners and learns that there's a Fiddle and Step-dance competition going on at the arena. Take a look: 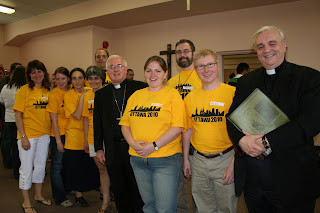 Today there was a preliminary planning meeting for next May's Youth Summit/Montee Jeunesse. There were representatives from Ottawa and Gatineau; the dioceses of Alexandria-Cornwall, Kingston and Pembroke; some national bodies (Famille Marie-Jeunesse, CCO/Catholic Christian Outreach, NET-Canada/Les Equipes NET); the Centre-Est francophone Catholic School Board, the Ottawa Catholic Challenge Movement and several parishes, priests and individuals involved in youth ministry.
Led by Soeur Marie-Pierre SNDN and Pere Olivier-Pierre OMI, both fluently bilingual, the friendly brain-storming session surfaced lots of wonderful ideas of how Ottawa's location and significance could help focus the four-day gathering from May 21-24, which is the Victoria Day Weekend civilly and the Pentecost weekend liturgically: 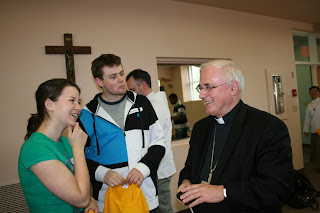 Could the eternal flame before the Peace Tower become an image of the fire of the Holy Spirit in our activities? What about the symbolism of a gathering on Parliament Hill, the place of debate and encounter in parliamentary democracy? What about the many bridges linking Ontario and Quebec in the National Capital Region as a symbol of linguistic, ecumenical, even interfaith dialogue?

Thanks to fellow blogger and CCN Reporter Deborah Gyapong, who attended the closing part of our exchange for these photos; she will be giving an account of the mood of our gathering in a forthcoming publication.... Belated birthday greetings to Deborah who was feted on her 60th this past week.