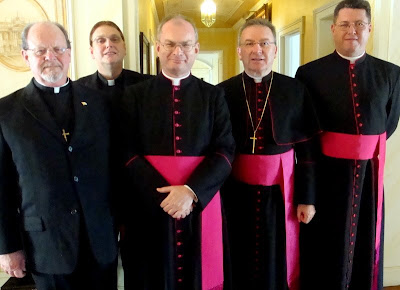 Today, June 30, the Church continues the celebration of the martyrdom of those Roman saints whose blood, like that of the Apostles Peter and Paul, became the "seed of Christians". 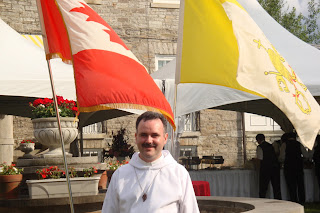 Yesterday, Archbishop Luigi Ventura (named to Canada on June 22, 2001 and took up office on September 10 that year) hosted a reception for members of the Diplomatic Corps as well as representatives of Catholic, religious and other entities to mark the Fourth Anniversary of Pope Benedict XVI's election to the Chair of Peter and, incidentally, to note the Fortieth Anniversary of the establishment of Diplomatic Relations between Canada and the Vatican (Holy See).

The Vatican is both an administrative body and the heart of the church. However, the Vatican did not become a sovereign state until it elaborated with Italy the Lateran Pact, ratified on February 11, 1929.

After the Vatican became sovereign, it set up a more formal "Apostolic Delegation" in Canada and elsewhere. In 1969, Canada's Prime Minister Pierre Elliott Trudeau met with Pope Paul VI and the Canadian government then opened diplomatic relations with the Vatican on October 16, becoming the 72nd country to do so at which point the Apostolic Delegation became an Apostolic Nunciature or embassy. 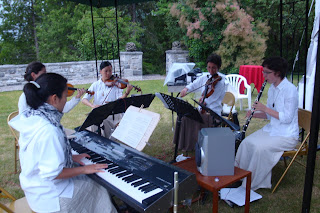 Anticipating the 40th anniversary in October, the musicians from Famille Marie-Jeunesse paused in their musical offerings for the Nunciature's guest [just before the rain started] and played the Canadian national and Vatican anthems. 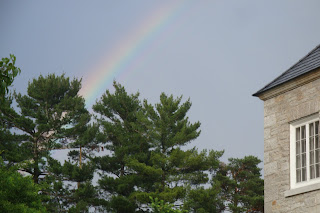 The chamber orchestra continued their playing as people huddled under the tents, noshed on finger food and chatted up their neighbours.

Whether a sign of divine beneficence or not, soon thereafter a rainbow was spotted over the Nuncio's rooftop.
Posted by Archbishop Terry at 9:13 PM