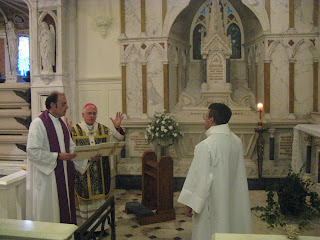 One hundred years ago today, Joseph Thomas Duhamel, the second bishop and first archbishop of Ottawa celebrated a four-hour ordination ceremony then set out for a pastoral visitation of Paroisse Sainte Euphemie, Casselman. He suffered an attack of angina and passed away that evening, aged 68, in his 35th year of episcopal office.

There is a statue of him outside Notre-Dame Basilica, on the corner of Sussex and Guigues streets, and his remains lie in the crypt of the cathedral. For this occasion, the 12:15 daily Eucharist was held in the "Archbishops Chapel"; six priests joined me in concelebrating a Memorial Mass.

As often regularly happens in these closing days of the academic year when schools plan excursions to Ottawa, groups from Catholic schools will attend the noonday liturgy. Thus, the principal, staff and students of St. Anthony Daniel School in Pickering joined us for the occasion: all the seats were taken for a more solemn (and longer) than normal celebration.

Before the final blessing, a procession was held to the crypt where Archbishop Duhamel is entombed; there the paschal candle was prominently lit and a floral arrangement placed for the occasion. There was incensing of the sarcophagus and prayers as we remembered his life and ministry, commending him to God's mercy.

Beginning in 1847, the year St. Joseph's College opened under the Oblate Fathers, he did all his studies there, completing theology and being ordained in December 1863, aged 22.

Father Duhamel served as curate in Buckingham, QC for a year before becoming pastor of St. Eugene de Prescott for ten years. After Mgr Joseph-Eugene-Bruno Guigues, o.m.i.died in February 1874, Duhamel, though only 33 years old, was named to succeed him.

In some ways he had been prepared for the office. For in 1869, he had accompanied Bishop Guigues to the First Vatican Council and served as one of his theological advisors at the Provincial Council of Quebec in 1873.

Duhamel's ministry as bishop and, from 1886 when Ottawa became an archdiocese, as archbishop would last close to thirty-five years. When Duhamel began as bishop, Ottawa had 60 parishes, 80 priests and about 100,000 faithful.

Though the diocese was twice reduced in size by creation of the Vicariates of Pontiac (now the Pembroke Diocese) in 1882 and Haileybury (now the Diocese of Timmins) in 1908, at his death parishes numbered 136, priests 250 and the faithful more than 100,000.

Archbishop Duhamel presided over extraordinary growth, defended the rights of Catholics to education in their language, and, fluently bilingual, was well-regarded by both linguistic communities. Guided by supernatural principles and faithful to Rome, he was a man of humility and affable, taking advice readily. He maintained good relations with governmental and church leaders and was esteemed by his people.

In this centennial year of his passing, we remember Thomas Joseph Duhamel our first archbishop, give thanks to God and remember him in our prayers.

"Eternal rest grant unto him, O Lord; and let perpetual light shine upon him!"

"May his soul and the souls of all the faithful departed, through the mercy of God, rest in peace. Amen."

******
The Annual English-speaking Youth Office's Rally for Youth "UNDER THE SON" takes place this weekend. A tent city blooms on the grounds of the Diocesan Centre (1247 Kilborn Place) as 150 persons take part in the weekend events: