JUNE 28, 2009 -- THE PALLIUM: SIGN OF UNION WITH CHRIST THE SHEPHERD AND PETER THE CHIEF SHEPHERD 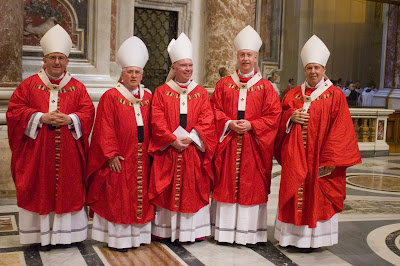 Two years ago, Canada had a record five metropolitan archbishops who received the pallium from Pope Benedict XVI. Tomorrow, the Solemnity of Sts. Peter and Paul and the closing day of the Special Year devoted to the Apostle to the Gentiles, two Canadian archbishops will receive their pallium: Pierre-Andre Fournier (Rimouski) and J. Michael Miller, C.S.B. (Vancouver).

The Pallium is rich in symbolism and the Holy Father's homily again this year will challenge the archbishops named in the past year to be willing to do all, even lay down their lives, for the faithful entrusted to their care. Here are the remarks he made at his own reception of the pallium which symbolizes his universal jurisdiction at the beginning of his pastoral ministry as the Successor of St. Peter on April 24, 2005:

“The first symbol is the Pallium, woven in pure wool, which will be placed on my shoulders. This ancient sign, which the Bishops of Rome have worn since the fourth century, may be considered an image of the yoke of Christ, which the Bishop of this City, the Servant of the Servants of God, takes upon his shoulders.

“God’s yoke is God’s will, which we accept. And this will does not weigh down on us, oppressing us and taking away our freedom.

“To know what God wants, to know where the path of life is found – this was Israel’s joy, this was her great privilege. It is also our joy: God’s will does not alienate us, it purifies us – even if this can be painful – and so it leads us to ourselves. In this way, we serve not only him, but the salvation of the whole world, of all history. 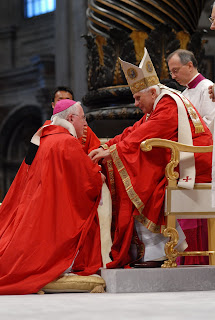 “The symbolism of the Pallium is even more concrete: the lamb’s wool is meant to represent the lost, sick or weak sheep which the shepherd places on his shoulders and carries to the waters of life.

“For the Fathers of the Church, the parable of the lost sheep, which the shepherd seeks in the desert, was an image of the mystery of Christ and the Church. The human race – every one of us – is the sheep lost in the desert which no longer knows the way. The Son of God will not let this happen; he cannot abandon humanity in so wretched a condition. He leaps to his feet and abandons the glory of heaven, in order to go in search of the sheep and pursue it, all the way to the Cross. He takes it upon his shoulders and carries our humanity; he carries us all – he is the good shepherd who lays down his life for the sheep.

"What the Pallium indicates first and foremost is that we are all carried by Christ. But at the same time it invites us to carry one another.

“Hence the Pallium becomes a symbol of the shepherd’s mission.... The pastor must be inspired by Christ’s holy zeal: for him it is not a matter of indifference that so many people are living in the desert. And there are so many kinds of desert.

“Therefore the earth’s treasures no longer serve to build God’s garden for all to live in, but they have been made to serve the powers of exploitation and destruction. The Church as a whole and all her Pastors, like Christ, must set out to lead people out of the desert, towards the place of life, towards friendship with the Son of God, towards the One who gives us life, and life in abundance.

“The symbol of the lamb also has a deeper meaning. In the Ancient Near East, it was customary for kings to style themselves shepherds of their people. This was an image of their power, a cynical image: to them their subjects were like sheep, which the shepherd could dispose of as he wished.

“When the shepherd of all humanity, the living God, himself became a lamb, he stood on the side of the lambs, with those who are downtrodden and killed. This is how he reveals himself to be the true shepherd: “I am the Good Shepherd . . . I lay down my life for the sheep”, Jesus says of himself (Jn 10:14f). It is not power, but love that redeems us! This is God’s sign: he himself is love.

“How often we wish that God would make show himself stronger, that he would strike decisively, defeating evil and creating a better world. All ideologies of power justify themselves in exactly this way, they justify the destruction of whatever would stand in the way of progress and the liberation of humanity.

“We suffer on account of God’s patience. And yet, we need his patience. God, who became a lamb, tells us that the world is saved by the Crucified One, not by those who crucified him. The world is redeemed by the patience of God. It is destroyed by the impatience of man.

“One of the basic characteristics of a shepherd must be to love the people entrusted to him, even as he loves Christ whom he serves. “Feed my sheep”, says Christ to Peter, and now, at this moment, he says it to me as well. Feeding means loving, and loving also means being ready to suffer. 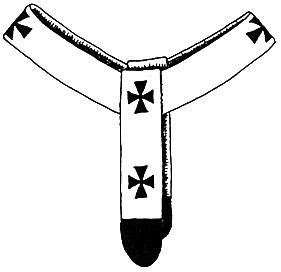 Seven are from South America:

Eight are from Europe:

Six are from Africa:

Finally, three are from Asia:

Please pray for the above and all who share the Holy Father's jurisdiction in their ecclesiastical province (for Ottawa, for example, this includes the three suffragan sees of Hearst, Pembroke and Timmins).
Posted by Archbishop Terry at 9:54 PM