The last of the 2008-2009 Pastoral Year's Confirmation celebrations took place yesterday afternoon at St. Leopold Mandic Parish in the Mechanicsville section of Ottawa, the former Notre Dame des Anges church, which the Croatian community received from Archbishop Joseph-Aurele Plourde some 23 years ago. Three pastors have come to serve the Croatian faithful; the present pastor is Father Adam Tabak, who has been here nine years and recently received permission from Archbishop Marin to serve an additional two years.

After Mass, a delicious dinner was served in the parish hall.

During the Mass the music ministry was led by the Croatian folk group, with traditional instruments; they also performed at the beginning of the celebratory meal. 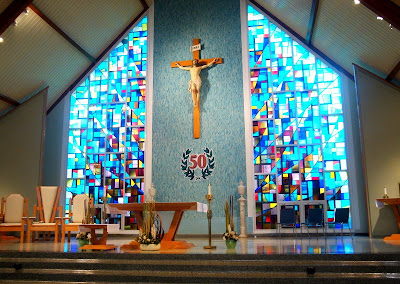 This morning, we closed the year-long activities this proud parish scheduled to mark the anniversary of its foundation on July 9, 1959. 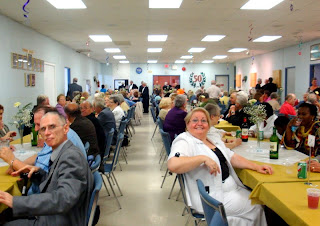 Among those in attendance was the first child baptized n the new parish Serge Sebastien; the founding pastor Abbe Dumoulin had, with some difficulty, persuaded the parents that his middle name should be taken in honour of the patron of the parish--a name chosen to honour the then Apostolic Delegate Archbishop (later Cardinal) Sebastiano Baggio--rather than Jean-Guy, the name of the godfather, who also came to today's anniversary Mass. 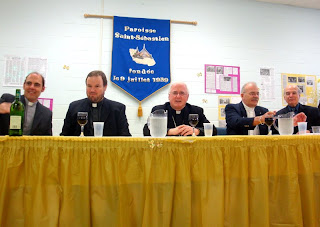 Several Marists who had been pastors or were in residence in the seventeen years after the founder retired returned for the occasion, along with the current pastor, Mgr Gilles Lavergne. A festive luncheon was served in the halls afterward.
Posted by Archbishop Terry at 3:10 PM