Our Lady of Divine Love (Pendleton, ON); Closing Mass for "Under the Son"; Mass of Thanksgiving for Eglise St-Dominique 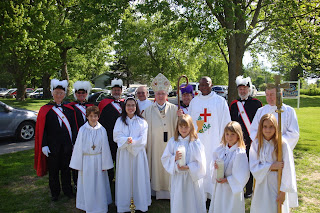 Our Lady of Divine Love is a small English-speaking community of about 65 families founded in 1947 in Pendleton, 45 minutes east of Ottawa, by Mgr Roger Lariviere who today celebrated the 68th anniversary of his priestly ordination.

The pastor these days is Father Titus Egbueh, who is hosting his parents from Nigeria for a couple of weeks. They attended the Sunday Eucharist (advanced from noon to 9AM to accommodate my schedule) and the monthly First Sunday of the Month's "Friendship Sunday", a community building pot-luck after Mass. 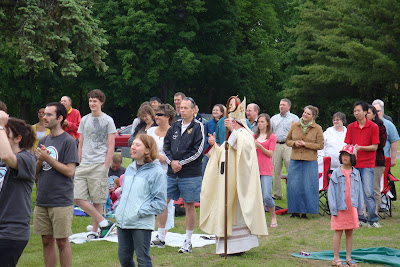 Closing "Under the Son" Youth Rally Mass
The Chinese Catholic Community of the Holy Spirit regularly celebrates Mass at noon on Sunday in the Chapel of the Diocesan Centre. However, today they combined forces with the Diocesan Youth Ministry Committee for the Closing Liturgy for parents and family of the young people attending Under the Son. Refreshments were served by parishioners. Deacon Peter Fan assisted me at the altar and said a few words in Chinese for the Chinese faithful after my homily.

[Photos: (above) Following the Closing Mass; (below) Father Geoff Kerslake beside the "Under the Son" tent city] 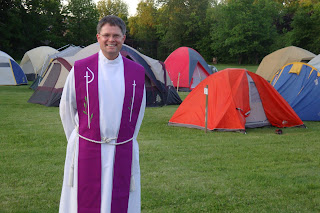 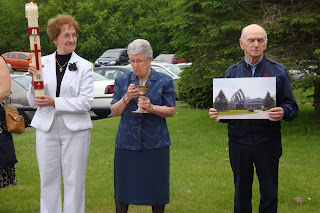 ******
This afternoon we celebrated the second Mass of Thanks-giving for a parish church about to be closed in Hawkesbury, this time Eglise St-Dominique (1964-2009). Former pastors Abbes Eddy Ladouceur (founding pastor), Gilles Marcil, Jean-Louis Gosselin, Jean-Pierre Fredette (current pastor), along with my Episcopal Vicar Daniel Berniquez and Pere Cadieux, o.m.i., who had links to the parish (five of the first seven pastors were former missionaries).

While there was sadness, there was also a deep sense of gratitude for the many ways the graces of the Holy Trinity had been manifest among them.

[Photo: Parishioners with chalice and paten; photo of saint Dominique church; and the Paschal Candle, sign of Christ going before his people in Hawkesbury to a single church in June 2009]
Posted by Archbishop Terry at 9:25 PM