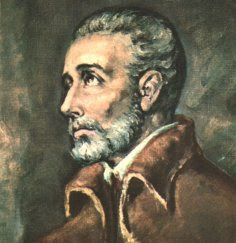 Saint John of Ávila, Apostle of Andalusia (Spanish: San Juan de Ávila) (6 January 1500 – 10 May 1569) was a Roman Catholic priest, Spanish preacher, scholastic author, religious mystic and saint. At the conclusion of a special World Youth Day Mass for seminarians at the Cathedral Church of Santa María La Real de la Almudena, in Madrid, Spain, on 20 August 2011, Pope Benedict XVI announced that he would soon declare St. John the 34th Doctor of the Universal Church. Pope Benedict announced on Pentecost Sunday, 27 May 2012, that the declaration of St. John as a Doctor of the Church will take place today, Sunday, October 7, 2012.

Saint John of Ávila was born in Almodóvar del Campo of a wealthy and pious family of Jewish converso descent. At the age of fourteen he was sent to the University of Salamanca to study law but returned after a year to his father's home, where he spent the next three years in the practice of austere piety. His sanctity impressed a Franciscan journeying through Almodóvar, on whose advice he took up the study of philosophy and theology at Alcalá de Henares, where he was fortunate to have as his teacher the famous Dominican Domingo de Soto. While he was a student his parents died and after his ordination he celebrated his first Mass in the church where they were buried, sold the family property and gave the proceeds to the poor.

He saw in the severing of natural ties a vocation to foreign missionary work and prepared to go to Mexico. In 1527, while he was in Seville looking for a favourable opportunity to set out for his new field of labour, his unusually great devotion in celebrating Mass attracted the attention of Hernando de Contreras, a priest of Seville, who mentioned him to the archbishop and Inquisitor General, Don Alonso Manrique de Lara. The archbishop saw in the young missionary a powerful instrument to stir up the faith in Andalusia, and after considerable persuasion Juan was induced to abandon his journey to America.

His first sermon was preached on 22 July 1529, and immediately established his reputation. During his nine years of missionary work in Andalusia, crowds packed the churches at all his sermons. However, his strong pleas for reform and the denunciation of the behaviour of the high society brought him before the inquisitor at Seville. He was charged with exaggerating the dangers of wealth and with closing the gates of heaven to the rich. The charges were quickly refuted and he was declared innocent in 1533. By special invitation of the court he was appointed to preach the sermon on the next great feast in the church of San Salvador, in Seville. Like other Spanish mystics of the period, including La Beata de Piedrahita, he was suspected several times during his career of belonging to the Alumbrados, deemed a heretical sect.

John of Avila is also remembered as a reformer of clerical life in Spain. He founded several colleges where his disciples dedicated themselves to the teaching of youths. Among the disciples attracted by his preaching and saintly reputation were Saint Teresa of Ávila, Saint John of God, Saint Francis Borgia and the Venerable Louis of Granada. Of special importance was the University of Baeza established in 1538 by a papal bull of Pope Paul III. Its first rector was Saint John of Ávila and became a model for seminaries and for the schools of the Jesuits.

He is especially revered by the Jesuits. Their development in Spain is attributed to his friendship and support to the Society of Jesus.

He began his career as apostolic preacher of Andalusia, aged thirty. After nine years he returned to Seville, only to depart for the wider fields of Cordova, Granada, Baeza, Montilla and Zafra. For eighteen years before his death he was the victim of constant illness, the result of the hardships of his apostolate of forty years. He died on 10 May 1569 in Montilla. 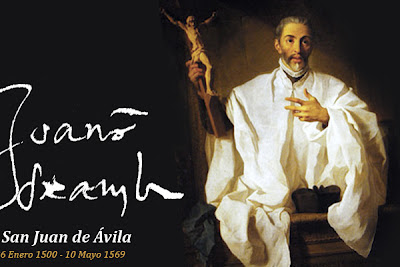 ﻿
Bishop Demetrio Fernandez of Cordoba says that by proclaiming St. John of Avila a Doctor of the Church this Sunday, Pope Benedict is recognizing the saint as a model of evangelization for our times.

In his weekly letter to parishioners on October 4, Bishop Fernandez called the St. John of Avila a “holy teacher of saints, the driving force behind the great renewal of the Church in the 16th century.”

Bishop Fernandez said the Church in Spain has been awaiting this proclamation “for centuries, and we are now direct witnesses of it. Generations and generations before us, especially priests and bishops, have desired and asked for it.”

The faithful and religious from across Spain have worked to bring about this special designation, he said, but the Diocese of Cordoba has played a special role, as it was there that St. John of Avila was incardinated and where he carried out most of his pastoral work.

“He stayed in Cordoba, and it was in the Diocese of Cordoba that he died. He was buried in Montilla, where his tomb is venerated as a treasure and today takes on special significance.”

In his letter, the bishop also noted that the special Jubilee Year to mark the proclamation will be opened on October 12 and that the Spanish bishops will make a pilgrimage to Montilla on November 23 as they meet for their fall assembly.

Bishop Fernandez invited the faithful from across Spain to also make a pilgrimage to Montilla to pray for the intercession of St. John of Avila.

He concluded his letter praying that St. John of Avila will intercede for Catholics to obtain “all holiness of life, missionary zeal, and desire to spend our lives in service of the Church.” (www.EWTNNews.com) 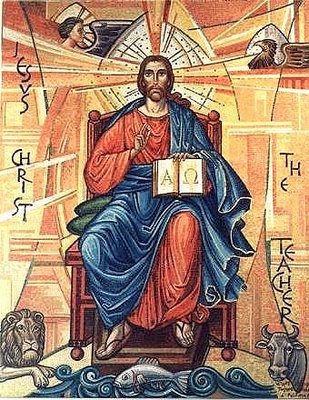 And Pharisees came up and in order to test him asked, "Is it lawful for a man to divorce his wife?"

He answered them, "What did Moses command you?" They said, "Moses allowed a man to write a certificate of divorce, and to put her away."

But Jesus said to them, "For your hardness of heart he wrote you this commandment. But from the beginning of creation, 'God made them male and female.' 'For this reason a man shall leave his father and mother and be joined to his wife, and the two shall become one flesh.' So they are no longer two but one flesh. What therefore God has joined together, let not man put asunder."(Mk 10:2-9).

Almighty ever-living God, who in the abundance of your kindness surpass the merits and the desires of those who entreat you, pour out your mercy upon us to pardon what conscience dreads and to give what prayer does not dare to ask. Through our Lord Jesus Christ, your Son, who lives and reigns with you in the unity of the Holy Spirit, one God, for ever and ever.

Posted by Archbishop Terry at 1:55 AM