A Young Evangelist Passes Away 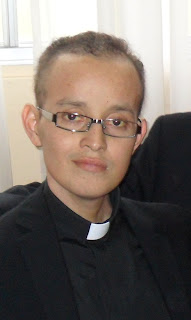 Ricardo Correa was a seminarian in the Redemptoris Mater Seminary in Quebec City.  Originally from Honduras, he had been named to the Neo-catechumenal Way missionary that is proclaiming the Gospel message in Ottawa and Gatineau parishes.

Though afflicted with cancer and with very little time left to live, Ricardo nonetheless very much wanted to come to Ottawa to share his experience of the Good News of Jesus Christ.  But his health would not permit it.

With the authorization of Quebec Archbishop Gerald Cyprien Lacroix, he was granted admission as a candidate for Holy Orders and called to the ministries of acolyte and lector last weekend.

On Thursday he was called home to the Father's house by the Lord Jesus who called him into his service.  His funeral will take place next Monday, October 29 at 2PM in the Church of Notre Dame de l'Annonciation in Ancienne-Lorette, Quebec.

Please pray for the repose of his soul, the consolation of his family and fellow seminarians, and beg God's grace that many other young men and women may be called as he was to serve the needs of God's people in our day.