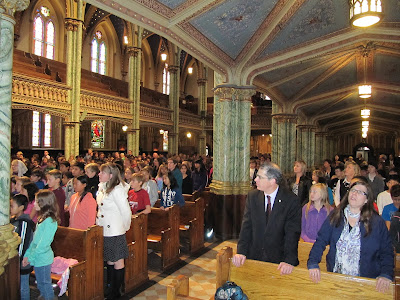 St. Andrew's Parish in Barrhaven has a large number of students in their five schools.  The students in grades five and six came for Mass at Notre Dame Cathedral Basilica last Thursday, the feast of St. Ignatius of Antioch.  We celebrated the Mass of the Holy Spirit as those in grade 5 will celebrate the Sacrament of Confirmation next year.

They were all well-instructed, kept wonderful silence and sang the hymns chosen for the day.  It was an inspiring occasion for all involved.  At the end of Mass, there were pictures taken of the concelebrating priests (the Pastor Father Jessimar Tapia and Regional Vicar Father Pierre Champoux) and servers as well as a photo of the school principals. 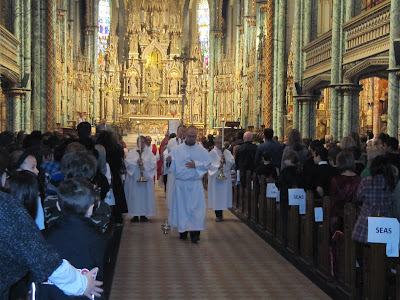 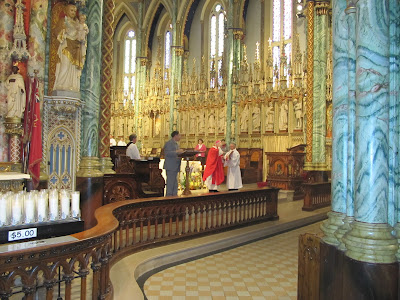 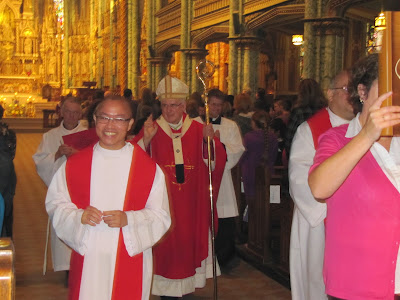 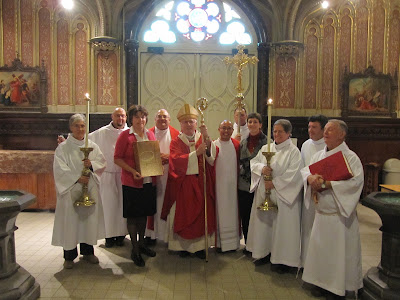 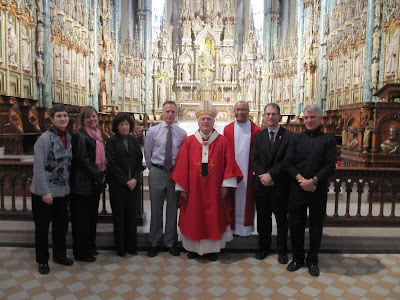 Bartimaeus is the second blind man that Jesus heals in Mark's gospel.  The healing of the blind man of , a town in and the home of Simon and Andrew took place in stages (cf. Mark 8.22-26), as today's healing does.  Each story also suggests implications for the faith life of a believing disciple.
After Jesus had put saliva on the eyes of the blind man and laid hands on him, He asked him whether he could see anything.  At first the man could see indistinctly (“I can see people, but they look like trees, walking” [8.24]).  Then Jesus told him to look again “and he saw everything clearly” (8.25).
In a way, this act of “looking again” may be understood to characterize all Jesus' teaching about His forthcoming Passion (8.31-10.45).  In this extended instructional unit, Jesus invited His disciples to see anew what it meant to be the followers of a crucified Messiah.  For the cross contains stirring implications for one's outlook on lifetime goals (8.34-9.1), authority in the community (9.33-37), marriage, divorce and family (10.2-16), wealth and possessions (10.17-31) and leadership in the Kingdom (10.35-45).
As Jesus went on teaching His disciples, they gradually moved towards in a weakened state of mind (“Jesus was walking ahead of them; they were amazed, and those who followed were afraid” [10.32]).  Now they have come to , one of the oldest human settlements known and the entry point for the Israelites when they had come into the Promised Land.  The City of stands as a liminal place and Bartimaeus would prove a model disciple.
His acclamation “Jesus, Son of David, have mercy on me” anticipated the welcome Jesus would receive in as heir to David's throne.  Though his was but one voice in the crowd, people were impatient to get to the , so they attempted to silence Bartimaeus (“many sternly ordered him to be quiet”).
But above the hubbub, Jesus had heard his plea, stopped and invited him to draw near.  Suddenly the crowd's reaction changed: “Take heart; get up, he is calling you”.  Bartimaeus spontaneously leapt up, abandoning his cloak and naming his deepest desire, “Rabbouni [my teacher], let me see again”.
Once Jesus healed Bartimaeus, he did not “go” away—now healed by his faith—as Jesus had directed.  Rather, after regaining his sight, he began to follow Jesus “on the way” (terminology that suggests more than the road—a call to , and the fulfilment of the Father's will).
Bartimaeus' response was the reverse of the rich man who would not follow Jesus; his enthusiasm was the opposite of the amazement, hesitation and fear of the Twelve and others on the journey with Jesus.  And Bartimaeus' healing epitomized what Jesus was about in teaching his disciples, namely healing their spiritual blindness, something that would not be complete until after his death and resurrection.
At the centre of the description of the priest in Hebrews we find stress on his humility and solidarity with people (“he is able to deal gently with the ignorant and wayward, since he is himself subject to weakness”).  This is the same empathetic stance we find in Mark's account of the foibles of the Twelve and Jesus' patience with them.
The prophets linked references to what God had done before with what God was about to do for .  As Jeremiah proclaimed God's coming salvation, he also invited the people, in anticipation, to declare God's praises: “Sing aloud with gladness ... and say ‘Save, O Lord, your people, the remnant of ’”.
Hope began to abound that what God had begun to do in a tiny remnant of would get extended to all who needed to hear the report of salvation (“those who are blind and those who are lame, those with child and those in labour... they shall return here”).
The contrast between eyes weeping at the desolation being inflicted, and the consolation of return, finds expression in the psalm (“may those who sow in tears reap with shouts of joy”).  Liberation and new sight, once inconceivable, can and do come true (“when the Lord restored the fortunes of , we were like those who dream; then our mouth was filled with laughter and our tongue with shouts of joy”).
Posted by Archbishop Terry at 1:30 AM