The Beheading of St. John the Baptist - Sixth Archbishop of Moncton Begins His Ministry 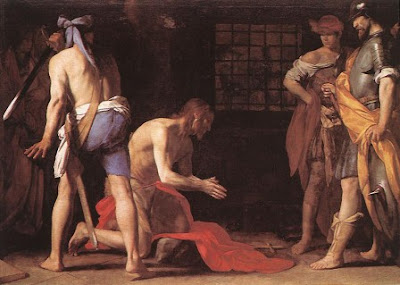 The Church, having celebrated the earthly birthday of St. John the Baptist on June 24, today honours the anniversary of his martyrdom.

Besides Our Lord and Our Lady, St. John the Baptist is the only one whose birth and death are thus celebrated.

Today's Gospel relates the circumstances of his execution. He had the courage to blame Herod to his face for the scandal of his illegal union with his sister-in-law Herodias, whose husband was still alive.

Herodias contrived to make Herod imprison him and took advantage of an unexpected oppportunity to obtain through her daughter Salome the beheading of the saint. (www.catholicculture.org).


O God, who willed that Saint John the Baptist should go ahead of your Son both in his birth and in his death, grant that, as he died a Martyr for truth and justice, we, too, may fight hard for the confession of what you teach. Through our Lord Jesus Christ, your Son, who lives and reigns with you in the unity of the Holy Spirit, one God, for ever and ever.

* * * * * *
MGR VALERY VIENNEAU
TO BE INSTALLED TONIGHT
AS ARCHBISHOP OF MONCTON 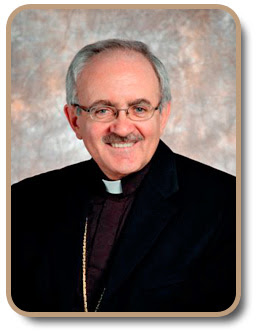 Regrettably, other commitments preclude my taking part in the installation ceremony for the new Roman Catholic Archbishop of Moncton, Most Reverend Valéry Vienneau, which will take place at the Our Lady of the Assumption Cathedral this evening at 7:00 p.m.  In October 2002, I attended his episcopal ordination in Bathurst.

Today, incidentally, marks the 30th anniversary of Archbishop Vienneau’s priestly ordination in Moncton in 1982. So, Happy Anniversary, Your Grace, and Best Wishes for a long and fruitful ministry in this diocese which is so significant for the Acadian faithful! Ad multos et faustissimos annos!

Prior to this appointment, Archbishop Vienneau, 64, served as Bishop of the Diocese of Bathurst. With this new appointment, he becomes the sixth archbishop of Moncton since the establishment of the archdiocese in 1936, succeeding Archbishop André Richard, c.s.c., who is retiring as required by the Code of Canon Law which states that a bishop must retire at the age of 75.

Archbishop Richard held office over a 10-year period. A number of guests are expected to join the local Christian community for this celebration. Among these are the Most Reverend Pedro López Quintana, Apostolic Nuncio to Canada, as well as bishops, priests, and religious from across Canada.

Archbishop Vienneau is a native of Cap-Pelé, New Brunswick. He served in a number of parishes in the archdiocese before being appointed vicar general in 1997. He holds bachelor's degrees in Arts (1968) and in Education (1971) from the Université de Moncton. He held a teaching position in public schools for nine years before pursuing studies in theology at the Dominican College in Ottawa, where he received a master's degree in Theology in 1987.

Archbishop Vienneau also taught religious science courses at the Université de Moncton. He is presently a member of the Episcopal Commission on Liturgy and the Sacraments for the francophone sector of the Canadian Conference of Catholic Bishops (CCCB).

The Archdiocese of Moncton is made up of 56 parishes and missions. The population of 110,895 catholics is serviced by 41 priests, 16 community priests, 249 religious, a permanent deacon as well as 84 pastoral agents. There are also two seminarians.