The faithful, under the guidance of an unerring Catholic instinct, have ever recognized the queenly dignity of the Mother of "The King of kings and Lord of lords": the Fathers, the Doctors of the Church, Popes, down through the centuries, have given authoritative expression to this truth and the crowning testimony to this common belief is to be found clearly expressed in the wonders of art and in the profound teaching of the liturgy. In their turn theologians have shown the fitting nature of this title of Queen as applied to the Mother of God, since she was so closely associated with the redemptive work of her Son and is the Mediatrix of all graces.

Pius XII, by his encyclical letter of October 11, 1954, granted the unanimous desire of the faithful and their pastors and instituted the feast of the Queenship of Mary, giving sanction thus to a devotion that was already paid by the faithful throughout the world to the sovereign Mother of heaven and earth.


* * *
O God, who made the Mother of your Son to be our Mother and our Queen, graciously grant that, sustained by her intercession, we may attain in the heavenly Kingdom the glory promised to your children. Through our Lord Jesus Christ, your Son, who lives and reigns with you in the unity of the Holy Spirit, one God, for ever and ever. 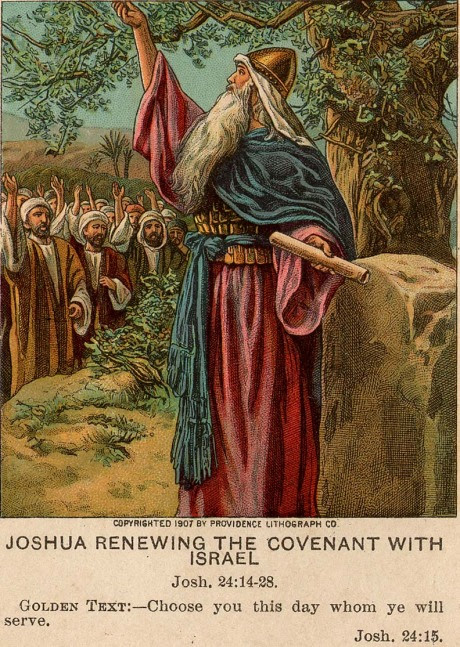 The last chapter of Joshua features a sacred ceremony at Shechem (modern-day Nablus), during which the Israelite tribes pledged allegiance to God (24.1-28). Most scholars see this account as the first such pledge of loyalty (“we will serve the Lord”). Others think it reflects an ongoing, perhaps annual, covenant-renewal ritual.

The notion of covenant is central to the biblical worldview and evolved over time. In general, a covenant signified a relationship based on commitment, including both promises and obligations and having the quality of reliability and durability. The relationship was usually sealed by a rite, such as an oath, sacred meal, or the invocation of blessings and curses, to make it binding.

The service at Shechem—worth reading in its entirety—began with Joshua telling in God's name the history they had experienced on the way to the promised land (24.3-13). Remarkably, no mention is made in this narrative of the events at Sinai or in the wilderness.

In a striking gesture, Joshua offered the people a choice: either to worship other gods or the Lord. In the continuation of his speech after the people's choice to serve the God who had intervened in their lives (24.19-27), Joshua warned of disasters that would come upon Israel if they proved unfaithful to the covenant they had entered with God—a message that, sadly, later came true.

Although the gospel today does not speak of covenant, there is a note of sadness as Christian readers learn that some, perhaps a majority of those who had been Jesus' disciples, stopped following him (“many of his disciples turned back, and no longer went with him”).

Jesus concluded his teaching on the Bread of Life by underlining the people's need to “eat the flesh of the Son of Man and drink his blood”. Without feeding on him in the Eucharist, he said, “you have no [eternal] life in you”.

When some stated that this was a difficult teaching—hard to accept—Jesus' reply touched on several points. Equally offensive to them would be his being lifted up on the Cross and his resurrection, preludes to his glorification (“what if you were to see the Son of Man ascending to where He was before?”).

Reiterating his instruction to Nicodemus (John 3.3-16), Jesus noted that there remains a radical cleavage between the worlds of the spirit and the flesh (“the words that I have spoken to you are spirit and life”). Those who do not believe belong to “the flesh”, which—in John's Gospel—regularly refers to that feature of human nature which resists or opposes God.

As he does in other gospel traditions (cf. Matthew 16.16-19), Simon Peter declares on the disciples' behalf that Jesus is the “Holy One of God”. When Jesus queried the Twelve whether they would also leave him, Peter voiced covenant trust on behalf of all believers, “Lord, to whom can we go? You have the words of eternal life”.

The covenant relation most Christians share is the loving commitment to their marriage partners. Paul's advice to the Ephesians strikes some Christians as outdated, even as troubling. Indeed, there is evidence the exhortations of Paul—“wives, be subject to your husbands...husbands, love your wives”—have been falsely used to justify spousal abuse and destructive family behaviour.

Yet these instructions were a significant development in their day and have the potential to be a blessing today. The first epistle of Peter and the letters to the Ephesians and Colossians develop their culture's fashion for “household codes” (instructions for spouses, children and parents, slaves and masters) by adding to them Christian motives (“as you are to the Lord”...”just as Christ loved the Church and gave himself up for her”).

While some in the first century looked down on the body and devalued sexuality, Paul argued that the spousal union is beautiful. Each partner should love the other's body as one's own (“no one ever hates his own body, but he nourishes and tenderly cares for it, just as Christ does for the Church”).

It is a message challenging those today who would cheapen sexuality, marriage, life-long fidelity. So, too, does Paul's overarching principle, given to both husbands and wives: “be subject to one another out of reverence for Christ”.

One of the first Jesuits I met at the Novitiate when I entered in August 1961, was Father John (Jack) Lynch, who was at that time the assistant to the Master of Novices and a teacher of Latin for us novices who had studied it already in high school or college.  He was a gentle person, kindly and shy, whose reserve was always evident whenever we met. An obituary notice appears below; his funeral and burial will be today in Pickering and Guelph respectively.

Father John Lynch died on August 18, at Rene Goupil Infirmary, Pickering, Ontario. He was in his 90th year and in the Society of Jesus for 66 years.

John Duncan Lynch was born in Halifax, Nova Scotia, the son of Duncan Lynch and Teresa Downing. After schooling at Saint Mary’s High School and a B.Sc. in Engineering from the Nova Scotia Technical College, he entered the Jesuit Novitiate at Guelph on October 14, 1946.

After philosophy studies at the Jesuit Seminary in Toronto, he studied physics for a year at Dalhousie University, then taught at Loyola High School, Montreal. Theology studies followed in Montreal and he was ordained at Collėge de l’Immaculée-Conception on June 18, 1959. Following his final spiritual year in Wales, Father Lynch was privileged to pronounce his final vows—where the first Jesuit companions had done in 1534—in the chapel of St. Denis at Montmartre in Paris on February 2, 1964.

Father Lynch’s ministry was varied in scope. After ordination he taught at the novitiate and was socius (assistant) to the Master of Novices, then took further studies in pastoral psychology and theology in Paris and Ottawa. In 1967 he moved to St. John’s, Newfoundland, as teacher and chaplain at Gonzaga High School.

In 1972 he travelled west to Winnipeg to serve in the chaplaincy at St. Paul’s College and the University of Manitoba. Then in 1974 he began his long ministry to the Native People of northern Ontario: at Sagamok, Little Current, Beardmore, Goulais, and Garden River. That phase ended in 1987 when he returned to St. Paul’s College as superior for a few years, before going back to St. John’s as superior of the Gonzaga Community and later pastor of St. Pius X. Church. The call of the North was heard again in 1993 when he went to St. Teresa’s Parish in Beardmore and finally St. Anne’s in Thunder Bay.

Increasing frailty brought about a move to the Jesuit Infirmary in 2008. Father John always retained a Maritime flavour in his personality: loving company, good stories and always appreciating wit and humour. Of a quiet temperament and slight of build, he possessed a zeal for ministry and community life.


Requiescat in pace.
Posted by Archbishop Terry at 7:02 AM