SUNDAY 20B -THE BANQUET OF LIFE - OM: St. Stephen of Hungary

The first unit of the Book of Proverbs (chapters 1-9) was attributed to Solomon, the son of King David. Its closing unit consisted in two parables, the ‘banquet of Lady Wisdom’ (Proverbs 9.1-6) and the ‘feast of Dame Folly’ (9.13-18).

These two models of behaviour are separated by a set of maxims that show that it is futile to try to instruct the incorrigible and headstrong; since this is so, it is better to concentrate on the docile (9.7-12).

Wisdom—the sapiential tradition found in the Bible and in the ancient world generally—taught that there were basically two ways, two attitudes toward life and, hence, two personifications (the wise person and the fool).

The house built by Wisdom may be understood as the school in which Wisdom reigns (“Wisdom has built her house, she has hewn her seven pillars”). Wisdom was present at the world's construction (Proverbs 8.27-30) and was delighted to live within it (8.31).

Wisdom's ‘house’ also referred to the natural world, with its seven pillars representing ‘fullness’ or ‘perfection’. For Wisdom may be acquired by observing nature and all that the processes of life have to offer.

The banquet (“she has slaughtered her animals, she has mixed her wine, she has also set her table”) stands for Wisdom's teaching. For Wisdom constantly extends to those “without sense” an invitation, “Come, eat of my bread and drink of the wine I have mixed”. Wisdom's concern is that all may have life and have it in abundance.

Bread and wine, in Old Testament times, represented the staples of life and so these items were used in cultic actions at God's Temple. By feasting on Wisdom's offerings, newcomers to the educational process would be encouraged to put aside worldly enjoyment out of love for and delight in learning. This implied leaving behind former companions and other ways of living (“Lay aside immaturity, and live, and walk in the way of insight”).

A key biblical truth was that the ‘fear of the Lord’ was the beginning of wisdom, a truth articulated by the psalmist (“O fear the Lord, you His holy ones, for those who fear him have no want”). While some biblical texts suggest that to ‘fear God’ implies fright, most often ‘fearing God’ equates with reverence for, trust in and dependence on God. The ‘fear of God’ means seeking God or taking refuge in him.

The first part of Jesus' bread of life discourse invited disciples to come to him for life (“I am the bread of life. Whoever comes to me will never be hungry, and whoever believes in me will never be thirsty”). These words may be understood as a parallel to Wisdom's invitation: coming to Jesus and feeding on him is to embrace his teaching and to live his way of life.

With the last part of Jesus' address, however, his words take on a particular focus on communing with him, feeding on his Body and Blood in the Eucharist. Jesus' earlier invitation to “eat this bread” now becomes to “eat the flesh of the Son of Man and drink his blood”.

The terms ‘flesh and blood’ in Hebrew refer to the bodily nature of human existence and underline the truth that the heavenly Son of Man truly became incarnate, took on human existence. But for every Christian they contain unmistakeable echoes of the Eucharistic sacrifice. Eating the flesh and drinking the blood of Christ in Communion now become the condition for receiving the life he offers (“unless you eat the flesh of the Son of Man and drink his blood, you have no life in you”).

Jesus' gift of eternal life, which will come to its fullness in the resurrection from the dead (“I will raise them up on the last day”), takes effect when the believer receives Jesus' gift of hmself in the Eucharist (“those who eat my flesh and drink my blood have eternal life”).

As we will see in next week's gospel, Jesus' powerful teaching on the Eucharist provoked a crisis for some of his disciples. They walked away from him and the wisdom teaching he held out. Others, however, chose to believe that “the one who eats this bread will live forever”. They decided to abide in him and to live. 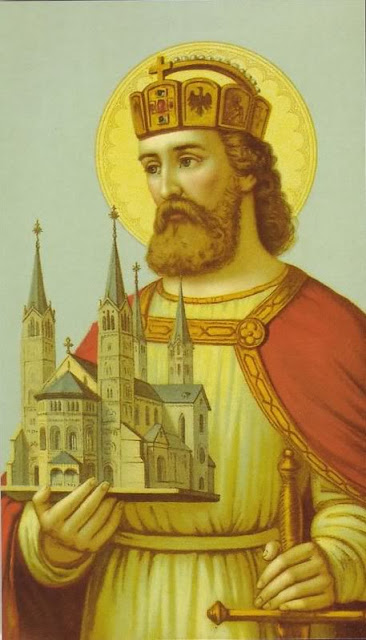 Vaik, son of Geza, Duke of Hungary, was baptized about 985 by St. Adalbert of Prague who gave him the name of Stephen. He was chosen by God to bring his people to the Christian faith.

With the assistance of monks from Burgundy he established bishoprics, founded several monasteries and re-organized the whole life of the country.

Pope Silvester II offered him the privilege of being crowned king and the ceremony took place on December 25, 1000. His great zeal for the spread of the Catholic faith earned him the title of apostolic king and apostle of Hungary.

He died on August 15, 1038, the feast of the Assumption of our Lady, to whom he had consecrated his kingdom.

Grant your Church, we pray, almighty God, that she may have Saint Stephen of Hungary, who fostered her growth while a king on earth, as her glorious defender in heaven. Through our Lord Jesus Christ, your Son, who lives and reigns with you in the unity of the Holy Spirit, one God, for ever and ever.
Posted by Archbishop Terry at 12:19 AM