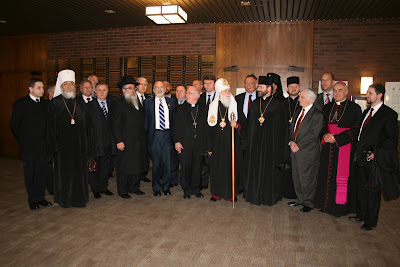 Last week before travelling to Vancouver, I was privileged to attend a meeting with a delegation of religious leaders from Ukraine who came to Canada and would travel on to the USA in honour of Ukrainian Catholic Metropolitan Sheptyptsky who helped rescue many Jews in Ukraine during World War II. I met the group at the synagogue of Rabbi Bulka, a wonderfully open religious leader that everyone in Ottawa seems to know and regard highly. 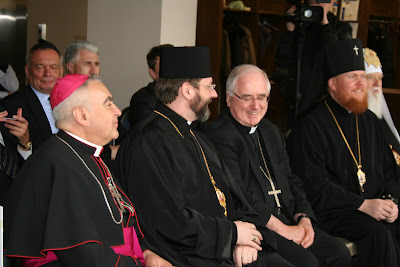 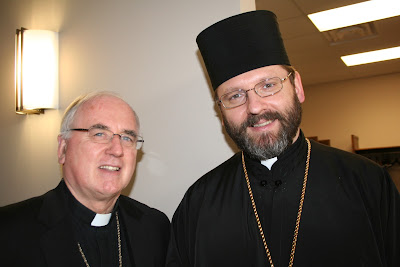 Among the members of the Ukrainian delegation was Major Archbishop Sviatoslav Shevchuk (pictured, the primate of the Ukrainian Greek Catholic Church who is acquainted with my friend Father David Nazar, superior of the Jesuits in Ukraine.

Other religious leaders included the Chief Rabbi of Kiev and Ukraine, Rabbi Jacob Dov Bleich, the heads of the three Orthodox churches in Ukraine, leaders from evangelical and Adventist religious communities and the Muslim Mufti of Ukraine. The delegation met with Prime Minister Stephen Harper following the passage of the motion. (Photo credit: Deborah Gyapong) 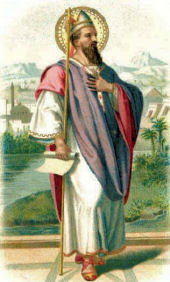 St. Athanasius was a champion of orthodoxy! He did not die a martyr, but his life was martyrdom in the truest sense. Athanasius was the Church's greatest hero in the battle against Arianism (a heresy that denied Christ's divinity). Even as a young deacon at the Council of Nicea (325), he was recognized as "Arius' ablest enemy" and the foremost defender of the Church's faith. After the death of his bishop (328), "the entire Catholic congregation with one accord, as one soul and body, voiced the wish of the dying bishop Alexander that Athanasius should succeed him. Everyone esteemed him as a virtuous, holy man, an ascetic, a true bishop."

There followed fifty years of constant conflict. Under five emperors and by exile on five different occasions, he gave testimony to the truth of the Catholic position. His allegiance to the Church never wavered, his courage never weakened. As consolation in the face of horrendous calumnies and cruel persecution, Athanasius looked to the unwavering love of his Catholic people. Even time brought no mitigation in Arian hatred. For five years he hid in a deep, dry cistern to be safe from their raging wrath and their attempts to assassinate him. The place was known only to one trusted friend who secretly supplied necessary food.

That Athanasius enjoyed God's special protection should have been obvious to all. On one occasion when the emperor's assassins were pursuing him, Athanasius ordered the ship on which he was fleeing to double-back and sail upstream so that he might meet and by-pass his persecutors. Not recognizing the boat upon meeting in semi-darkness, they naively asked whether the ship carrying Athanasius was still far ahead. Calmly and truthfully Athanasius himself called back, "He is not far from here." So his persecutors kept sailing on in the same direction, allowing the saint to complete his escape.

Preserved by divine Providence through a lifetime of trial and danger, he finally died in his own quarters at Alexandria during the reign of the Emperor Valens (373). Athanasius enriched Christian literature with many important works, some pointed toward piety and edification, others polemical and dogmatic in nature. He ruled the Church of Alexandria for forty-six years [Excerpted from Pius Parsch, The Church's Year of Grace.]

Almighty ever-living God, who raised up the Bishop Saint Athanasius as an outstanding champion of your Son's divinity, mercifully grant, that, rejoicing in his teaching and his protection, we may never cease to grow in knowledge and love of you. Through our Lord Jesus Christ, your Son, who lives and reigns with you in the unity of the Holy Spirit, one God, for ever and ever.

Posted by Archbishop Terry at 5:50 AM