Death in St. John's of Retired Vatican Diplomat in his 90th Year

The Most Reverend Martin W. Currie, Archbishop of St. John's has made known the death today of the Most Reverend William Aquin Carew, who served the Church for many years in the Vatican's diplomatic service. 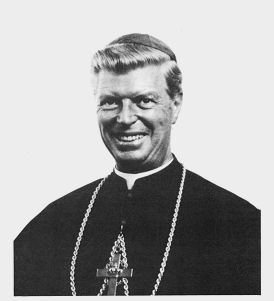 Archbishop William Aquin Carew was born in St. John's October 23, 1922, only son of William J. Carew, C.B.E., K.C.S.S., and Mary Channing. There were three sisters who are all resident in St. John's. Educated at St. Bonaventure's College from 1927 to 1940, and at St. Paul's Seminary of the University of Ottawa, he was ordained to the priesthood June 15, 1947.

From 1950 to 1952 he specialised in diplomacy at the Pontificia Academia Ecclesiastica, the Vatican's diplomatic college in Rome. Returning to St. John's, Father Carew was Secretary to Archbishop P.J. Skinner during 1952-1953.

Returning to Rome, he became an official of the Vatican Secretariat of State from 1953 to 1969. He was bureau chief of the English language section from 1963 to 1969 and as such handled all Papal audiences by English-speaking heads of state and government.

Created a Supernumerary Privy Chamberlain of His Holiness in 1955, he became a Right Reverend Monsignor in 1964. Monsignor Carew accompanied His Holiness Pope Paul VI on his pilgrimage to the Holy Land in January 1964 and on his visit to Uganda in 1969.

He was a member of the Papal Mission to the tercentenary of the Canadian Hierarchy in Quebec in October 1959 and to the quadricentennial of the evangelisation of the Philippines in Cebu, April 1965.

On November 27, 1969 he was named titular Archbishop of Telde and Apostolic Nuncio to Rwanda-Burundi in Central Africa. He was consecrated January 4, 1970 in St. Peter's Basilica by the late Cardinal lldebrando Antoniutti, whom he had served as personal secretary at the Apostolic Delegation in Ottawa from 1947 to 1950.

Archbishop Carew arrived in Kigali, Rwanda, February 28, 1970 and served as Nuncio in both republics for four and a half years. In April 1972 he was sent as extraordinary envoy of His Holiness on a special mission to Bangladesh.

On May 10, 1974 the Archbishop was named Apostolic Delegate in Jerusalem and Palestine (including Israel and Jordan with residence in Jerusalem), as well as Apostolic Pro-Nuncio to Cyprus and Apostolic Visitor to Greece. While in these posts he served as Grand Chancellor of the University of Bethlehem, Ecclesiastical Superior of the Advanced Theological Studies at Tantur, and of the House of Abraham Hospice in Jerusalem.

After nine and a half years as Apostolic Delegate in Jerusalem and Palestine (Jordan and Israel) and Apostolic Pro-Nuncio in Cyprus, he was named Apostolic Pro-Nuncio in Japan on August 30, 1983. Archbishop Carew arrived in Tokyo November 18, 1983, and presented Credential Letters to Emperor Hirohito on November 30, 1983. His Holiness Pope John Paul II went to Japan February 24-26 1981, visiting Tokyo, Hiroshima and Nagasaki.

After retiring in 1997, Archbishop Carew returned to his native Newfoundland. Funeral details are pending.

Posted by Archbishop Terry at 1:19 PM