Happy 85th, Holy Father! - The Reception of Some Anglicans into Full Communion with the Church


This is a week of milestones for the Holy Father.

Today is Pope Benedict XVI's 85th birthday and the 85th anniversary of his baptism (he was born on Holy Saturday morning and his parents took him straight over to the church for they knew that the new baptismal water had just been blessed).

Thursday, April 19, is the seventh anniversary of his election as pope. We rejoice with him and keep him in our thoughts and prayers: Ad multos annos!

O God, who chose your servant Benedict in succession to the Apostle Peter as shepherd of the whole flock, look favourably on the supplications of your people and grant that, as Vicar of Christ on earth, he may confirm his brethren and that the whole Church, may be in communion with him in the bond of unity, love and peace, so that in you, the shepherd of souls, all may know the truth and attain life eternal.  Through our Lord Jesus Christ.... 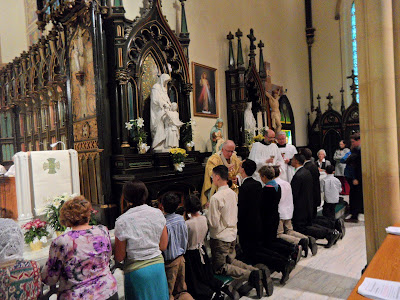 Dear brothers and sisters in Christ,

“Behold, how good and pleasant it is when brothers dwell in unity!

It is like the dew of Hermon, which falls on the mountains of Zion! For there the LORD has commanded the blessing, life for evermore.”

Some scholars believe that Psalm 133 was used to dedicate the second temple. Clearly, God blesses unity, and God is pleased today. Today, the Body of Christ is a little more healed, a little more unified. Today, after half a millennium, separated brethren are separated no more! We are brethren, rejoicing at the same banquet table! Hallelujah!

In the opening words of his document Anglicanorum coetibus, Pope Benedict foretold this afternoon’s celebration:

“In recent times, the Holy Spirit has moved groups of Anglicans to petition repeatedly and insistently to be received into full Catholic communion individually as well as corporately. The Apostolic See has responded favourably to such petitions. Indeed, the successor of Peter, mandated by the Lord Jesus to guarantee the unity of the episcopate and to preside over and safeguard the universal communion of all the Churches, could not fail to make available the means necessary to bring this holy desire to realization.”

This celebration takes place on the eighth day of Easter, a solemn end to the first period of the “Great Fifty Days” during which the Church universal celebrates the mystery of the Resurrection of Jesus Christ, until its conclusion at Pentecost. The chronology groups the early Church’s experience of the Risen Lord into three milestones: Jesus’ resurrection, his ascension, and the gift of the Holy Spirit. This follows Luke’s pattern in the Acts of the Apostles.

The Fourth Gospel emphasizes the underlying unity of these same mysteries of the risen Lord Jesus Christ. Today’s gospel notes that on the evening of the day of his resurrection, Jesus conferred the Spirit on the disciples and the authority to forgive sins in Jesus’ name.

In John the Evangelist’s perspective, Jesus’ new, risen life; the conferral of the Spirit; and the proclamation and celebration of the forgiveness of sins; are intimately connected. To anyone who thinks that the sacrament of penance is a bit of a downer, please note that it was given to the Church on the most joyous day in history!

The account of Jesus’ meeting with Thomas explores the notion of the healing of memories associated with forgiveness. When the disciples told Thomas of their meeting with Jesus, he could remember only Jesus’ suffering and death. This painful memory did not allow Thomas to grasp, and rejoice in, the resurrection.

On such an occasion as this, both Anglicans and Roman Catholics will have memories, painful or bittersweet, of communal and individual experiences. Please ask the Holy Spirit to heal those memories. The healing may be gradual, but it is an important part of the reconciliation process.

Thomas has done a favour to generations of believers prone to his outlook. Known as the Twin, Thomas appeared earlier in the Fourth Gospel. He presents himself as a loyal but pessimistic follower of Jesus, ready to die with him (John 11.16). At the Last Supper, he found it difficult to follow Jesus’ train of thought and plainly told him so (14.5).

Thomas’s doubt raises the issue of the link between seeing and believing. In his gentle handling of Thomas, we can see how Jesus addresses the doubts, fears and concerns of his disciples: “Reach out your hand and put it in my side. Do not doubt but believe.”

The challenge to believe evokes from Thomas a most profound expression of faith in Jesus’ identity: “My Lord and my God!” It is a prayer that has found a place on the lips of Christians down the ages. Jesus’ response encourages Christians living in times after the Ascension: “Blessed are those who have not seen and yet have come to believe.”

On April 30—the Second Sunday of Easter in the Great Jubilee Year 2000—in his homily at the canonization of St. Faustina Kowalska, Pope John Paul II declared that this Sunday “from now on throughout the Church will be called Divine Mercy Sunday.”

The liturgy points to the path of mercy. God’s mercy invites each person to go to Him. It also creates new relations of fraternal solidarity among human beings.

In a meditative and circular style of presentation, the First Epistle of John captures the thrust of God’s infinite mercy. It speaks of a circuit of love moving between God and the one “born of God.” In his view, this dynamic interchange must overflow into love of one’s neighbour who, in turn, comes to love God.

The supreme expression of love is the self-sacrificing gift made by Jesus “who came by water and blood.” “Water and blood” can mean several things.

“Water” may represent Christian baptism and “blood” the Eucharist. These are the primary ways in which disciples encounter Jesus sacramentally.

“Water” and “blood” recall a controversy about how Holy Communion should be interpreted in the early church. This was reported by St. Cyprian, bishop of Carthage in North Africa, from about AD 249 until his martyrdom in 258.

In speaking of the Eucharist, Cyprian recalls the union of the people with their Lord. Cyprian suggests that the water in the cup represents the people of God. The wine, of course, is the shed blood of the Saviour. When the priest mixes the water with the wine in the cup, it depicts the unbreakable union of love that Christians have with one another and with their Lord. It is therefore improper to use either water or wine alone. Similarly, the bread that is broken consists of “wheat gathered and ground down and kneaded together” with water to form one loaf. For Cyprian, the Eucharist is a powerful experiential witness to the “sworn bond” (the sacramentum) that binds together believers as one body in Christ.*

This was important for Cyprian as he sought to deal with communities in the North African churches that departed from, but were later reconciled with, the full church. For Cyprian, the uniting of the community in Christ became the major function of the Eucharist, as it will be for all of us sharing in Holy Communion this afternoon. 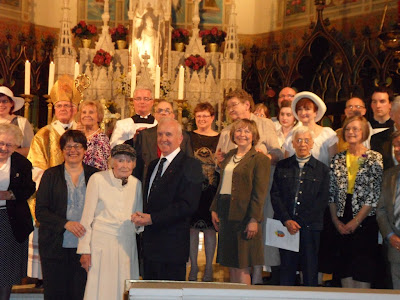 You are not just favoured guests. This is your home. We love you. I love you. May our public witness of unity draw many from the edges of faith into God’s Kingdom, no longer subject to judgement but to Divine Mercy.  Amen.
_________