Jesus' resurrection unleashed extraordinary energy not only in the universe but also among his disciples. The Acts of the Apostles relates how the early church was moved by the Spirit of Jesus released among them to share their lives and possessions in common.
Luke describes the harmonious life of the early Christians to edify subsequent generations. Despite the idealized portrait of the early Church, there were different views about how people should handle their possessions. Luke does not suggest that all believers had to dispose of their assets. Clearly not all did.
Each person had to respond to the gospel message as he or she was moved by the Spirit. It is this openness to the Holy Spirit, resulting in joy and mutual support, that gives evidence that God's blessing rested on the Church (“and great grace was upon them all”).
The yearning of Greeks for “koinonia” (fellowship in sharing material and spiritual goods) and Jewish zeal that social justice permeate the lives of God's people (“there was not a needy person among them”) are fulfilled in the summary description of the community's life-style. The hinge anchoring these two dimensions and motivating their communal sharing was the apostles' powerful testimony to the resurrection of Jesus.
The Church invites Christians to celebrate the mystery of the Resurrection for the “Great Fifty Days” before Pentecost. This chronology, which separates the early Church's experience of the Risen Lord's presence into discrete moments (Jesus' resurrection, ascension and gift of the Spirit), owes much to the Lukan schema in Acts.
The Fourth Gospel stresses the underlying unity of these same mysteries of the risen Lord. Today's gospel notes that on the evening of the day of his resurrection (“the first day of the week”) Jesus conferred the Spirit on the disciples (“Receive the Holy Spirit”) and the authority to forgive sins in Jesus' name (“If you forgive the sins of any they are forgiven them; if you retain the sins of any, they are retained”).
In John the Evangelist's perspective, Jesus' risen life—the conferral of the Spirit and the proclamation and celebration of the forgiveness of sins—all are intimately connected. Though not stated explicitly, John implies that Jesus' ascension to the Father took place on Easter Day soon after his encounter with Mary Magdalene in the garden.
In a symbolic action, Jesus breathed on his apostles, a gesture reminiscent of God's breathing into Adam's nostrils the breath of life (Genesis 2.7). So, the formation of the Church at Easter is a kind of new creation. The disciples are created anew to fulfil a mission to the whole world, preaching repentance and the forgiveness of sins in anticipation of God's kingdom. Those who respond to the Church's preaching receive the forgiveness of their sins (“if you forgive the sins of any, they are forgiven them”). Those refusing the message thereby choose to remain in their sins (“if you retain the sins of any, they are retained.”)
Thomas, known as the Twin, appeared earlier in the Fourth Gospel where he was seen as a loyal but pessimistic follower of Jesus, ready to die with him (John 11.16). At the Last Supper, he found it difficult to follow Jesus' train of thought and was unembarrassed to tell him so (14.5).
We are not told why Thomas was absent on that evening when Jesus came to commission his disciples. But Christians in every age have found in his words (“unless I see the mark of the nails in His hands ... I will not believe”) an echo of their own struggle to believe in a Jesus they have not seen but have heard much about.
A week later, Jesus' sensitivity to Christian doubt met Thomas' concern by inviting him to touch his hands and put his hand into his side. With this came a challenge that we may translate as “Stop being an unbeliever; show yourself a believer”.
One tradition, narrated by Ignatius of Antioch, says Thomas did put out his finger and his hand and touched Jesus. The gospel narrative suggests only that Thomas was overwhelmed by Our Lord's kindness to him. In an act of supreme irony, the biggest sceptic expresses the greatest confession about Jesus, “[You are] my Lord and my God!”
* * * * * *


﻿﻿ ﻿﻿
Father Fred Crowe was my professor when I studied the Trinity; we also lived together in the Pedro Arrupe Community for several years when I was Rector of Regis College. His life work was the interpretation of the writings of his fellow Jesuit Bernard J. F. Lonergan, a native of Buckingham, Quebec (at that time part of the Archdiocese of Ottawa). He has relatives and friends in the Saint John, NB area as well as in the Montreal, Ottawa and Toronto areas, to all of whom I offer my sympathy.  His wake will take place in the St. Joseph Chapel at Regis College, 100 Wellesley St. West, Toronto, on Monday, April 16 from 2:00-4:00 and 7:00-9:00 PM; the funeral Mass will be celebrated there on Tuesday, April 17 at 11 o'clock. R.I.P.
The following is an adaptation of the obituary provided by the Jesuits in English Canada and the Lonergan Research Institute: 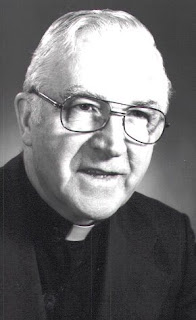 Father Frederick E. Crowe died peacefully on Easter Sunday, April 8, 2012, at René Goupil House, Province Infirmary, Pickering, Ontario, in the 97th year of his life and the 76th year of his religious life.
Frederick Crowe was born on July 5, 1915, in Jeffries Corner, New Brunswick, the son of Jeremiah Crowe and Margaret (Mahoney). He attended high school in Sussex, NB, and then received a Bachelor of Science degree in Electrical Engineering from the University of New Brunswick in 1934.
After entering the Guelph novitiate on September 6, 1936, he studied philosophy at the Jesuit Seminary in Toronto from 1940 to 1943 and did a teaching stint at Saint Mary’s University in Halifax from 1943 to 1946, then returned to Toronto for theological studies at the Jesuit Seminary (1946 to 1950).
Ordained a priest in Toronto on June 27, 1949, he pursued doctoral studies in theology at Rome’s Gregorian University from 1951 to 1953. On his return to Canada, he joined the faculty of the Jesuit Seminary in 1953 and taught there and at Regis College until he retired from teaching at age 65, when he became Professor Emeritus and devoted his energies full-time to research and writing.
Father Crowe served as President of Regis College from1969 to 1971, then became the first Director of the Lonergan Research Institute (LRI) in 1985, and served in that capacity until 1992.
From 1992 to 2006 he continued work at the LRI as one of the General Editors of the Collected Works of Bernard Lonergan and as author of numerous writings. He lived in the Regis Jesuit Community, notably at Pedro Arrupe House from 1983 until 2006 when he transferred to the Jesuit Infirmary in Pickering.
Father Fred discovered his principal work during his years studying theology in Toronto in the late 1940s. For it was then that he became a student not only of theology but in particular of the work of Bernard Lonergan, who was on the faculty of the Jesuit Seminary at the time. When Fr Lonergan left Toronto for the Gregorian University in 1953, he assumed the task of preparing the index for Insight, a book that for all practical purposes was complete at the time, even if it was not published until 1957.
Slowly he began the task of collecting the data on Lonergan’s work after Father Lonergan entrusted to him a number of his papers in 1953 and another set in 1972. These became the first instalments of the Lonergan Archive, the basic research source in the Lonergan Center that Father Crowe established at Regis College in 1970. However, the Center contained much more: dissertations, articles, and books written on Lonergan or using his work, along with audio recordings of lectures by Lonergan. In 1985 the Center became the Lonergan Research Institute.
Father Crowe oversaw the establishment of this distinct institution and was its Director in the early years of its existence. In 1986, he signed a contract with University of Toronto Press for the publication of the Collected Works of Bernard Lonergan, a project for which, with Father Robert Doran, he served as General Editor. He will be remembered as the foremost Lonergan scholar of the twentieth century and as the person without whom Lonergan’s work would not have become as accessible as it is.
There is a large international community grateful to him for what he did to make the Lonergan legacy possible. But his work is not limited to promoting the writings of his great teacher. The list of publications in his own name comes to roughly 200 items, including books and articles. His work involved in teaching Trinitarian theology is legendary. Some of his writings are landmark interpretations of Lonergan’s work, but some are original contributions, including a few that will achieve status as permanent advances in systematic theology. Among the latter is the work he did interpreting and advancing Lonergan’s later thought regarding the Christian approach to world religions.
Father Crowe also owns the distinct achievement of having published an original book at the age of 90, Christ in History: The Christology of Bernard Lonergan from 1935 to 1982. This book is an indispensable guide to the development of Lonergan’s thought on Christology.
Posted by Archbishop Terry at 2:34 PM