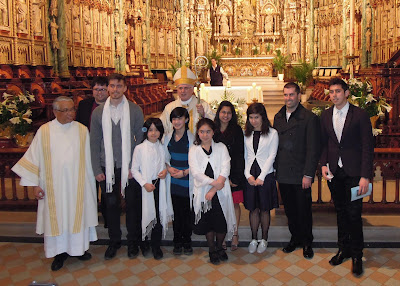 Above are the neophytes: those baptized, confirmed and given Holy Communion at the Easter Vigil along with members of the Cathedral's RCIA team and one of the four additional members of our faith community who were confirmed that night.

Below are several other photos (courtesy of Jean-Claude Grant) of opening moments of the Vigil itself and other photos taken afterwards.  Accompanying the photos are Cyril an excerpt from  St. Cyril of Jerusalem's Catecheses in which he helps put into words what the newly initiated have undergone (it is the selection from today's Office of Readings). 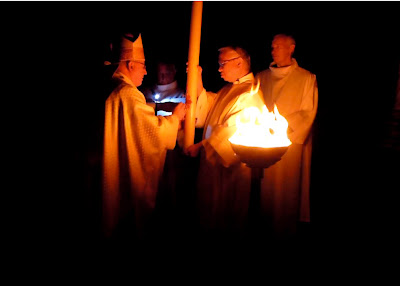 The Catecheses of Cyril of Jerusalem

When we were baptized into Christ and clothed ourselves in him, we were transformed into the likeness of the Son of God. Having destined us to be his adopted sons, God gave us a likeness to Christ in his glory, and living as we do in communion with Christ, God’s anointed, we ourselves are rightly called “the anointed ones”. When he said: Do not touch my anointed ones, God was speaking of us.

We became “the anointed ones” when we received the sign of the Holy Spirit. Indeed, everything took place in us by means of images, because we ourselves are images of Christ. Christ bathed in the river Jordan, imparting to its waters the fragrance of his divinity, and when he came up from them the Holy Spirit descended upon him, like resting upon like.

So we also, after coming up from the sacred waters of baptism, were anointed with chrism, which signifies the Holy Spirit, by whom Christ was anointed and of whom blessed Isaiah prophesied in the name of the Lord: The Spirit of the Lord is upon me, because he has anointed me. He has sent me to preach good news to the poor. 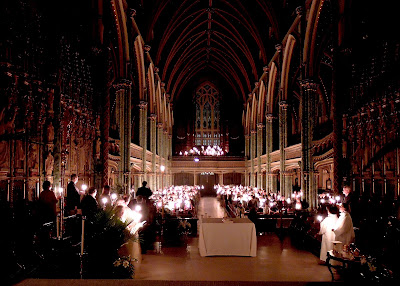 Christ’s anointing was not by human hands, nor was it with ordinary oil. On the contrary, having destined him to be the Saviour of the whole world, the Father himself anointed him with the Holy Spirit. The words of Peter bear witness to this: Jesus of Nazareth, whom God anointed with the Holy Spirit. And David the prophet proclaimed: Your throne, O God, shall endure for ever; your royal sceptre is a sceptre of justice. You have loved righteousness and hated iniquity; therefore God, your God, has anointed you with the oil of gladness above all your fellows.

The oil of gladness with which Christ was anointed was a spiritual oil; it was in fact the Holy Spirit himself, who is called the oil of gladness because he is the source of spiritual joy. But we too have been anointed with oil, and by this anointing we have entered into fellowship with Christ and have received a share in his life. Beware of thinking that this holy oil is simply ordinary oil and nothing else. After the invocation of the Spirit it is no longer ordinary oil but the gift of Christ, and by the presence of his divinity it becomes the instrument through which we receive the Holy Spirit. While symbolically, on our foreheads and senses, our bodies are anointed with this oil that we see, our souls are sanctified by the holy and life-giving Spirit. 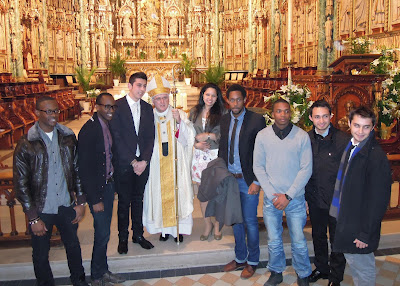 Posted by Archbishop Terry at 8:03 PM