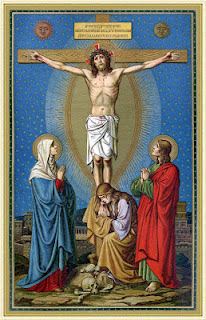 In its entry on Good Friday, the Catholic Encyclopedia notes that: The origin of the term Good is not clear. Some say it is from "God's Friday" (Gottes Freitag); others maintain that it is from the German Gute Freitag, and not specially English. Sometimes, too, the day was called Long Friday by the Anglo-Saxons; so today in Denmark.

If Good Friday were called good because English adopted the German phrase, then we would expect Gute Freitag to be the common German name for Good Friday, but it is not. Instead, Germans refer to Good Friday as Karfreitag—that is, Sorrowful or Suffering Friday—in German.


So, in the end, the historical origins of why Good Friday is called Good Friday remain unclear, but the theological reason is the one given in the Baltimore Catechism: Good Friday is good because the death of Christ, as terrible as it was, led to the Resurrection on Easter Sunday, which brought new life to those who believe.                                        (Source: http://about.com/catholicism)
* * * * * *
Danilo and Anna Maria Zanzucchi (of the Focolare Movement), Founders of the “New Families” Movement, were invited by Pope Benedict XVI to write and narrate the Way of the Cross to be held this evening at the Colosseum in Rome.  Here is an excerpt from their work:

WAY OF THE CROSS 2012
FOURTH STATION 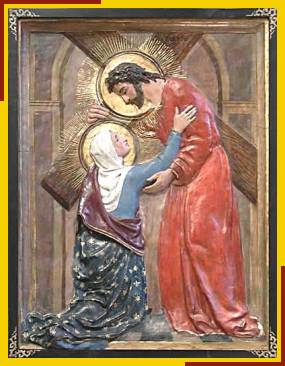 Jesus meets his mother
V. We adore you, O Christ, and we bless you.
R. Because by your holy cross you have redeemed the world.

From the Gospel according to John 19:25

Standing by the cross of Jesus were his mother, and his mother’s sister, Mary the wife of Clopas, and Mary Magdalene.

Certainly, Jesus,
it pains you to see your mother suffer in this way.
But you must make her a part
of this tremendous divine drama.
For such is God’s plan
for the salvation of the human race.

For every man and woman in this world, but especially for us families, the meeting of Jesus and his mother on the way to Calvary is a powerful and ever timely event. Jesus gave up his mother so that each of us – including the spouses among us – might have a mother who is always there for us. Sometimes, sadly, we forget this. But, when we think about it, we realize that countless times in our lives as families we have turned to her. How close she has been to us in times of trouble! How many times have we entrusted our children to her, how often we have asked her to intervene for their physical health and, even more, for their moral protection!

How often has Mary heard us, and have we felt her near to comfort us with a mother’s love.

Along each family’s way of the cross, Mary is the model of that silence which, even in moments of overwhelming pain, gives birth to new life.

Posted by Archbishop Terry at 7:11 AM