Second Sunday in Ordinary Time B - Mike Budge at 50

The Canadian and United States Conferences of Catholic Bishops simultaneously published a pastoral plan to follow up the Third Continental Congress on Vocations to Ordained Ministry and Consecrated Life in North America, held in ten years ago in April 2002.
The Congress's theme—“Vocación, Don de Dieu, Given for God's People”—expressed in three official languages the Church's conviction that all service to God's people is a response to divine initiative.
God continually calls youth, as we see in the reading from the Book of Samuel.  Today's crucial challenge today remains to find guides able to help those called to respond—as Eli instructed Samuel—with a joyful self-offering, “Speak, Lord, for your servant is listening”.  Samuel's childhood call developed as he grew; the Lord stayed by him and ensured that his prophetic ministry was effective ([God] ‘let none of his words fall to the ground’).
The programmatic booklet was entitled Creating a Vocation Culture in .  The first part, in three chapters, reflected on the experience of the Congress, which many agreed was an extraordinarily positive one (the opening chapter cites as its leitmotif the experience of Jesus' encounter with his two disciples on the Road to Emmaus, “Were not our hearts burning within us?”)
Then, consideration was given to the complex realities of the North American Church today (“the field is the world”), citing the other event that took place ten years ago, the World Youth Day in Toronto as a special “vocational moment” lived out in North America, and noting the shifts in generations and the unique characteristics of each (Millenials and Gen-Xers).
The third chapter explores the biblical and theological foundations for vocation ministry (“Jesus interpreted to them what referred to Him in all the Scriptures”), some of which are present in this and next Sunday's readings.
The second half charted a path for the future in vocation ministry in and the .  The authors were convinced that the Church has the best chance to discover, affirm and nurture calls to ordained ministry and religious life when it professes that all disciples are called by God to live their vocation—including marriage and the single life—in service to the world.
Two appendices close out the work, the letter of Blessed Pope John Paul II to Congress delegates and a statement crafted by young adult delegates during a special session they held one evening.
The youth delegates expressed their desire for a covenant relationship with the Church, and pledged to offer back to the Church all that they would ask for and receive.  They specifically called on those in consecrated life and ordained ministry “to offer us authentic joyful witness to your way of life, that we may experience the passion of your service... and share your deep excitement and deep love of Christ and the Church”.
They also invited religious and priests, in ongoing dialogue, to inspire them and help them recognize the gifts they bring to church life.  They said they need, “continued nurturing of our personal vocations as baptized Christians, inclusive of all vocations to the married, single or religious life”.  They expressed a desire for spiritual directors who would share their skills with them, along with meaningful catechesis, ongoing formation and education.
They stressed the importance of “authentic and true witnesses to our faith who are not afraid to be vulnerable in sharing their story, including their strengths and weaknesses”.  Finally, they urged the Church to focus on youth and young adults: “We thirst for support in living our Catholic faith and desire to share that faith with a world that hungers for God”.
As in the Old Testament lectionary reading, the call motif is evident in the Gospel, in which Andrew and another, unnamed disciple come to know Jesus as God's Messiah.  They recall even the time of day—the tenth hour—or four o'clock in the afternoon.

Discovery of Christ, however, cannot be kept to oneself; it must be shared.  So Andrew brought the good news to his brother Simon, leading him to Jesus.  Simon's encounter was so profound it required a change of identity; henceforth he would be Cephas, which means “Peter” (“Rock”), the one to whose care the Lord would entrust his sheep (cf. John 21.15-17).
As the Church in recalls the two major events of 2002—the Vocation Congress and World Youth Day—it is important to reflect on how the hopes of expressed following the Congress have helped develop a “culture of vocation” for all God’s people. 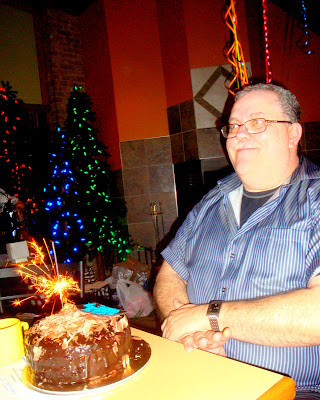 For years, Mike Budge has organized the annual early-August five-diocese (Alexandria-Cornwall, Gatineau, Mont-Laurier, Ottawa and Pembroke) pilgrimage to Sainte Anne de Beaupre (with stops at the Shrine of Our Lady at Cap de la Madeleine and sometimes at St. Joseph's Oratory).  He reminded me that my next date to serve as host-bishop is coming up in August 2014.

On the weekend he turned fifty, which led family, co-workers, friends and pilgrims to celebrate his special day.  I dropped in to the celebration; some photos: 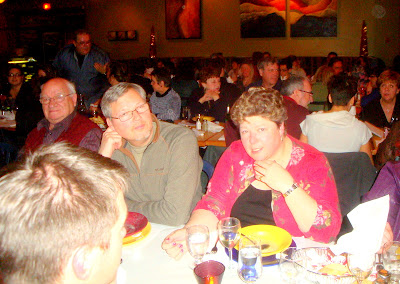 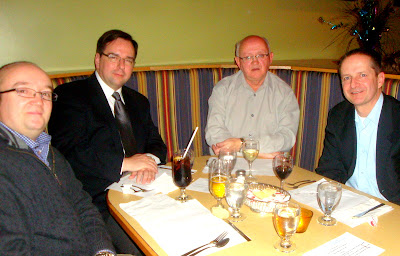 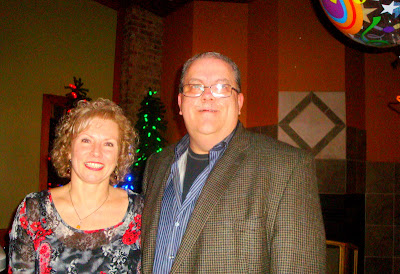 Posted by Archbishop Terry at 6:56 AM