CNEWA Meeting - A Visit to the Metropolitan Museum of Art

When the Catholic Near Eastern Welfare Association (CNEWA) was invited to be established in Canada, its purpose was to assist Christian Churches in the Middle East, Eastern Europe and Eastern rite Catholics in India: training seminarians, assisting with social development projects, coming to the relief of those suffering persecution (such as Iraqi Christians) and reaching out to others in need in these same regions.
Canadian bishops have accepted to serve on the Board of Directors (we usually meet at the Canadian Conference of Catholic Bishops annual fall assembly) to offer assistance to the Executive Director and his staff, whose offices are in our Diocesan Centre.  The picture of the current board [above] was taken at the October 2011 meeting.
In my capacity as Canadian President, I also attend the international board meeting in CNEWA's offices in the Catholic Pastoral Center of the Archdiocese of New York (in December or January). My visit last week for the Annual General Meeting allowed me a chance to congratulate CNEWA ex-officio President Archbishop Timothy M. Dolan on his nomination as a Cardinal a few days earlier.
After the meeting, it is custom for the Trustees to visit the office staff to thank them for their contribution to the wonderful work that CNEWA is able to achieve with the help of so many generous benefactors.
Some photos: 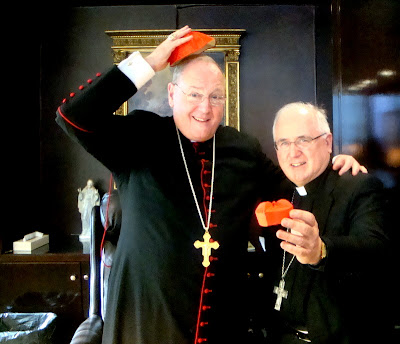 * * * * * *
A VISIT TO THE
METROPOLITAN MUSEUM
Since the time of my studies at Fordham University (AB, '67), I have always found a trip to the MET a wonderful immersion in things cultural and historical. So, I looked forward to my chance for a few hours there on Friday morning last week, before my long adventure getting home despite the closure of Ottawa airport.  I took a few pictures on my way to the excellent exhibition on The Renaissance Portrait: From Donatello to Bellini.
One may take photos without flash in most of the museum, but not in the special exhibit, so the following photos are en route to the exhibit and the last photo is the poster from the exhibit, a work by Sandro Botticelli, entitled "Ideal Portrait of a Lady" ["Simonetta Vespucci"]: 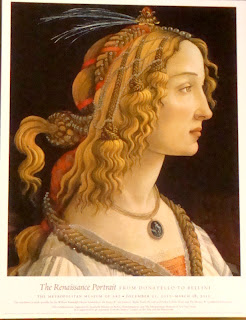 Posted by Archbishop Terry at 7:02 AM