Lunar New Year of the Water Dragon in Ottawa Parishes 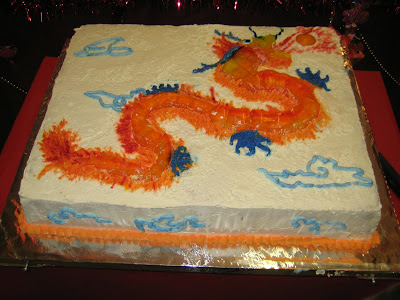 Several of our Ottawa parishes are caught up in the celebration of the Lunar [“Chinese”] New Year. The photos are taken from my visit to the celebration in the parish hall of  Sheng Shen (Holy Spirit) Chinese Catholic Parish yesterday (New Year’s Eve). Further pictures of the Mass and of the exchange of greetings with leaders from Our Lady of LaVang Vietnamese Parish on Friday will be uploaded later in the week.

AsiaNews.it is a Catholic website that focuses on the Church in Asia. The following is drawn from their informative item on the Lunar New Year:

Today, January 23, the Far East is celebrating the start of the Year of the Dragon. Along with China, Hong Kong, Macao and Taiwan, Vietnam, Japan, Korea, Singapore and Chinese communities all around the world, from New York to Toronto, from Melbourne to Indonesia, Thailand, Malaysia will celebrate.

The Dragon is the luckiest sign in the Chinese zodiac because it is the only mythological animal of the 12 signs (the others are all earthly animals: rooster, snake, rabbit, etc ...). This makes it a powerful celestial sign, which brings wealth, virtue, harmony and longevity. It is not by chance that the dragon has always been the symbol of the Emperor and the Chinese are known as "the sons of the dragon."

Chinese astrologers and their predictions have been fighting for some time against the Mayan predictions, which for 2012 foresee - no one knows how - the end of the world. For Eastern futurists, however, this year will fix the troubles of the past years in the spheres of economics and love.

2012 is a year of the "water" Dragon (the influence of one of the 5 original elements). The last such year was 1952. That, and the promise of happiness and wealth was enough to stir in much of the Chinese world to "rush" to have a child in the year of the Dragon! In China, experts are already predicting a 5% increase in births - even with the heavy limitations of the one-child law - and a 27% growth in sales of diapers!

We may ask, will the Year of the Dragon usher in democratic change in China? Maybe not. One thing is certain: this year will see civil society struggle even more in China to defend their rights against the excessive power of the economic and political oligarchy and that the Party will continue its policy of arrests of dissidents, lawyers, bishops and religious figures to avoid any "Arab Spring" made-in-China.

Finally, the Christians. The previous year of the Dragon was the Jubilee of 2000, which marked a revival of religion and faith in the world and in China. Nausea of materialism and the witness of Christians has produced much fruit, even if the government is trying in every possible way to divide the churches and communities.

Despite what many think, the Dragon is on the Christians side. It is true that in the Apocalypse the dragon tries to devour the child of the Woman (Revelation 12: 1-10), but the Chinese dragon is the not dragon of the West. In China, the dragon is one of the sources of the universe’s energy and the swift messenger of the Lord of Heaven.

“Translated” into Western culture, a dragon would be closer to a guardian angel or an archangel, and therefore, the Chinese dragon works for the children of the dragon, but also for the Church! 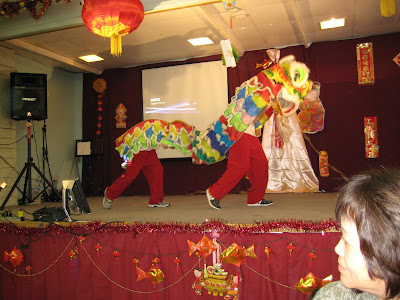 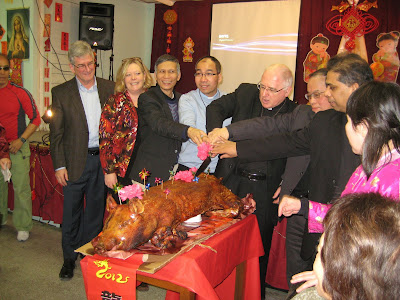 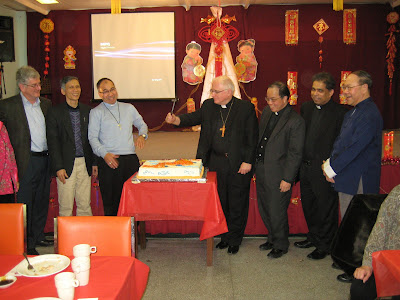 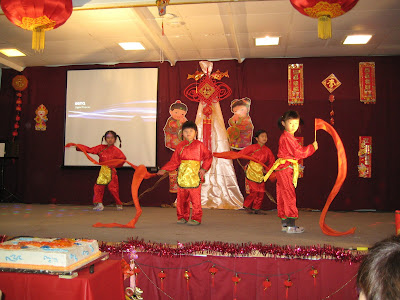 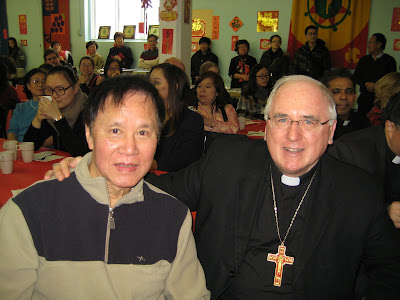 Photo credit: Mr. Lau (above)
Posted by Archbishop Terry at 6:32 AM