Today, the Week of Prayer for Christian Unity begins (January 18-25)
The Week is promoted by the World Council of Churches (WCC), a worldwide fellowship of 349 Churches seeking unity, common witness and Christian service. The Catholic Church participates in this ecumenical initiative, despite not being a member of the WCC.
The Week of Prayer for Christian Unity is traditionally celebrated from 18 to 25 January in the northern hemisphere, and around the time of Pentecost in the southern hemisphere. It brings together Christian parishes and congregations from different confessional families all over the world, who meet and pray together in special ecumenical celebrations.

Each year ecumenical partners in a particular region are asked to prepare a basic text on a biblical theme. Then an international group with WCC-sponsored (Protestant and Orthodox) and Roman Catholic participants edits this text to ensure it is linked with the search for Christian unity.


The text is jointly published by the Pontifical Council for Promoting Christian Unity, and by the WCC's Commission on Faith and Order which also accompanies the entire production process of the text. The final material is sent to member Churches and Roman Catholic dioceses, which are invited to translate the text and contextualise it for their own use.


This year's theme comes from St. Paul's First Letter to the Corinthians which promises the transformation of human life - with all its apparent dimensions of 'triumph' and 'defeat' - through the victory of Christ's resurrection.


Following the Angelus prayer on last Sunday, Benedict XVI invited the faithful, "as individuals and in communities, to participate spiritually, and where possible practically in the Week of Prayer, to ask God for the gift of full unity among the disciples of Christ". [Vatican Information Service]

Almighty ever-living God, who gather what is scattered and keep together what you have gathered, look kindly on the flock oif your Son, that those whom one Baptism has consecrated may be joined together by integrity of faith and united in the bond of charity.  Through our Lord Jesus Christ, your Son, who lives and reigns with you in the unity of the Holy Spirit, one God, forever and ever. 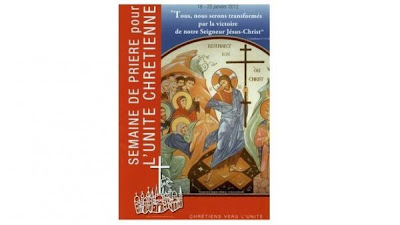 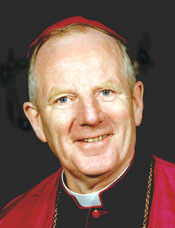 July 12, 1931 - January 17, 2012
Bishop Colin Campbell, who lived in retirement in Halifax, Nova Scotia passed away yesterday evening; his sister, Sr. Therese, SC was present with him.  He was a good friend and always a source of encouragement for me:
Most Reverend Colin Campbell (born in Antigonish, on July 12, 1931) was a Roman Catholic bishop of the Diocese of Antigonish, Nova Scotia, Canada.


* * *
Bishop Colin had numerous leadership positions in the Archdiocese of Halifax and with the National Society for the Propagation of the Faith in Toronto before his appointment as bishop in Antigonish.  He took a course in journalism in California to be able to use the media to evangelize, which he did in a regular Saturday column in the Halifax Chronicle Herald newspaper.

The following essay from the Antigonish diocesan website, is his testimonial to Pope John Paul II in the Great Jubilee Year 2000. It gives a sense of his approach to issues and his writing style.

Tutore te Christe "With Christ as Your Teacher" was his episcopal motto and expresses his conviction that the priest and the bishop listen to Christ teach them and hand on his message to others.

My dear sisters and brothers in Jesus Christ,

There were mixed reactions to the various images of the Pope over the Holy Days. Some noted how he held on to the crozier for support. Others found him frail at the Mass. Some people told me that they found that he looked more rested than they had seen recently. There was a beautiful shot of him with children releasing doves from Saint Peter’s Square.

No matter what glasses we are using, the man is frail and failing. God has given him his great wish; to be Pope to lead God’s people into the Great Jubilee and the New Millennium. There is endless speculation about how long he can carry on. At least those around him have gotten the message that major scissors must be used to cut the schedule. I pray that the huge delegation that is going from our diocese for World Youth Day in August will find him alive and active enough to inspire.

There is little doubt that two of the great things that he brought the Church are hope and courage. From his first day on the balcony at Saint Peter’s, his cry was: “Be not afraid!” In a world that seemed to have marginalized the Church and the message of Jesus, what advice could be more solid? This lack of fear must be based on hope, knowing that the Church has come through much worse times and that we are but the instruments of the Holy Spirit.

What has he done for the Church? One author sums it up in major points. One or other of them may appeal to you and you may have your own list. In my view, he is the greatest Pope of this century and one of the greats in the history of the Church. I would put him with Pius X and Pius XI as the great leaders of the Church in this century.

His first gift has been a new Papacy. This role has mostly been respected in the world. Even when there were rogues in the office, (and make no doubt, there were some), the position had some clout. But the luster of the Papacy and the credibility of the office in the World and the Church has never been so high. Who has had more visits and more frequent flyer points?

Do you remember when he was elected? I was present for his “Installation” and his first Mass on the Square. The question was:- will he implement the Council or will he downplay it? The answer is now in. He has been a great champion of the Council and all that it teaches. One has only to see the Catechism of the Catholic Church and how it drinks from the teachings of the Council. Every bishop who has visited and dealt with him can speak of his fraternity - my fellow bishops. The bowing and scraping are non-existent.

He who has understood the intellectual underpinnings of the new culture better than most because of his excellent education and his teaching career, has not hesitated to challenge the relativism of much of this culture. In documents like Veritatis Splendor and Evangelium Vitae, he is not only courageous, but prophetic.

There will be tons of ink and many trees cut down for decades to unpack his role in the collapse of communism. When all is said, it will be clear that his role was both powerful and in many cases, immediate. He used his moral authority, intellectual capacity and rare courage to nearly overstep his role as Pope to bring down this myth of economic and human freedom.

Although he came on the scene when ecumenism had passed its polite tea party stage, he has held the course and urged people to be steadfast. His unfailing courtesy and personal warmth not only to ecumenical but inter-faith dialogue, has angered a good number of Catholics. Yet it has shown where his heart is, despite the enormous doctrinal mountains that must yet be scaled.

Because he is so at home with Jews, having grown up with them, he has brought a new breath of air into this dialogue. He has not underestimated the complexity of the situation in Israel, nor will he impulsively take one- sided actions, but he knows that he must move the Church. Watch what his visit to Israel in March will do for this whole challenge.

In my view his most important gift has been his great spiritual leadership. There is no one in the world today that does not know that he is a mystic. Every Catholic knows by his example that the heart of the Gospel is a life of prayer and if we do not have it, we are beating the air. People are not fooled. We know that the man is the spiritual leader of the World with a moral and prayerful authority that is far larger than his “job” as Pope.

Finally, he has been visible and zealous. For all the time I have nattered on and on to seminarians about zeal, I should have just pointed to our Holy Father. He puts any bishop to shame by his work ethic and his visitation around the world. Yes, he still does week-end visits to the parishes in the Diocese of Rome! “The Zeal of the Lord has consumed me.”

May we all meet the Lord with such filled hands. Please pray now for the person who will be asked to follow him. He will need the overpowering grace of the Holy Spirit.