The Baptism of the Lord - Celebrating Christmas with Eastern Rite Christians 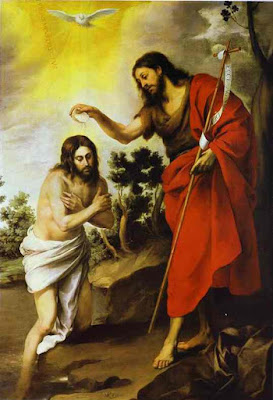 The Baptism of the Lord (Year “B”) - January 9, 2012
JESUS' BAPTISM FORESHADOWS HIS CROSS
[Isaiah 55.1-11; [Isaiah 12]; 1 John 5.1-9; Mark 1.7-11]
The opening of Mark's gospel (1.1‑13) has been described as a dramatic prologue introducing the actors and setting of a briskly-told play that is comparable to a Greek tragedy.  At the core of this prologue is the narrative of the baptism of Jesus by John the Baptist.
The evangelist Mark's rough-hewn Greek style can appear naive. His frequent use of the Greek adverb “immediately” and a constant stream of the conjunctive “and” (both of which—unfortunately in my view—get removed in translations that smooth over and flatten out the “infelicities” of the original) suggests a narrator who is breathless to share his “good news” narrative with eager listeners (“and just as [=and immediately] he was coming up out of the water”...).
Again, despite the apparently simple pattern of his gospel's structure, Mark has arranged three revelatory scenes (one at the beginning, a second at mid-point, and the third at the end) to communicate Jesus' true identity.
Firstly, at Jesus' baptism (1.9-11), the heavens were opened and only Jesus saw the heavens torn apart and the Spirit descending like a dove on Him.  This awareness of the gift of God's Spirit will lead Jesus to exercise the Spirit's power throughout the gospel.
By Mark's allowing his audience to see the true import of the baptismal event, of course, he gives them, in advance, the correct interpretation of Jesus' words and deeds.
It would seem that we are likewise to understand that Jesus alone (but with the hearers and readers of the gospel listening in) heard the words pronounced by the heavenly Father at the baptism, “You are my Son, the Beloved; with you I am well pleased.”  The words are a citation of Isaiah 42.1, which are followed, in Isaiah's text, with the words “I have put my Spirit on him” that tie in with the baptism.
Secondly, at the transfiguration (9.2-8), similar words came from heaven, this time addressed by God to the three chosen disciples: “This is My Son, the Beloved; listen to him!”  A few verses earlier, Jesus had begun to instruct his disciples about his coming passion, death and resurrection (8.31-38).
The proclamation of Jesus as God's Son intends to counteract the possibility of Peter, John and James (or the gospel hearers) taking offense at Jesus' future suffering or his challenge to take up their cross and follow him.
Lastly, a third articulation of Jesus' identity takes place immediately after He cried aloud and died on the cross (15.33).  In this instance, the confession of Jesus' identity comes not from God but from the Roman soldier who had seen Jesus expiring with such force that his last breath—the outpouring of the Holy Spirit--had torn the veil of the temple in two: “Now when the centurion, who stood facing Him, saw that in this way he breathed his last, he said, ‘Truly this man was God's Son’”.
In contrast with the earlier confessions of Jesus' divine Sonship, which were given to a restricted number of listeners (to Jesus alone at the baptism, to Peter, James and John on the mountain of transfiguration), the pagan soldier's declaration was a public statement.
What Mark wants to suggest by the revelation of Jesus' true status to ever-widening circles, I believe, is that it is only with the crucifixion that one can truly understand His divine Sonship.  Without reference to the cross, there is a danger that Jesus' divinity will be misconstrued as a personal prerogative and not as an emblem of His call to be God's suffering servant, who brings righteousness to and the Gentiles.
As the gospel story unfolds in the weeks to come in the Sunday gospels (and in the next few days and weeks until Lent begins), we will note that Jesus regularly silences the demons who reveal his identity as God's Son.  For the unclean spirits, in league with Satan, unveil Jesus' divinity to thwart his ministry and deflect Him from his mission.
Mark's “messianic secret”, as the silencing of those who would reveal his identity has been called, suggests it is dangerous to speak of God's Son without reference to Jesus' fulfilling that role by dying on the cross “as a ransom for many” (10.45).  As we shall see in coming weeks, this truth has implications for all the baptized who would be Jesus' disciples.
THE BAPTISM OF THE LORD
Almighty ever-living God, who, when Christ had been baptized in the River Jordan and as the Holy Spirit descended upon him, solemnly declared him your beloved Son, grant that your children by adoption, reborn of water and the Holy Spirit, may always be well pleasing to you. Through our Lord Jesus Christ, your Son, who lives and reigns with you in the unity of the Holy Spirit, one God, for ever and ever. 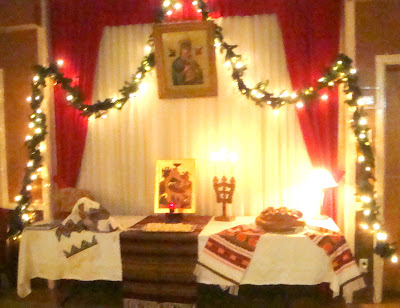 On Friday evening, January 6, I joined the staff, seminarians and friends of Holy Spirit Seminary in Ottawa for their Christmas Eve gathering and festive supper (a meatless but otherwise ample meal as may be seen in the following pictures):
Their Christmas greeting is: "Christ is born" to which the reply is "Glorify Him!" 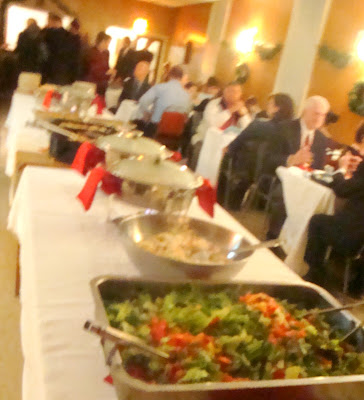 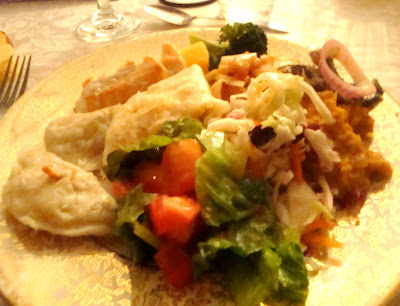 Posted by Archbishop Terry at 9:14 AM