Today, the liturgy permits the memorial of several saints, including the Venerable Bede (673-735)


Within the walls of the imposing Norman Cathedral of Durham lies the simple tomb of a Christian monk who has earned the title as the "Father of English History".

Bede was born at Tyne, in County Durham, and was taken as a child of seven to the monastery of Wearmouth. Shortly afterwards he was moved to become one of the first members of the monastic community at Jarrow.

Here, he was ordained a deacon when he was 19 and a priest when he was 30; and here he spent the rest of his life. He never travelled outside of this area but yet, became one of the most learned men of Europe.

The scholarship and culture of Italy had been brought to Britain where it was transported to Jarrow. Here it was combined with the simpler traditions, devotions and evangelism of the Celtic church. In this setting Bede learned the love of scholarship, personal devotion and discipline . He mastered Latin, Greek and Hebrew and had a good knowledge of the classical scholars and early church fathers.

Bede's writings cover a broad spectrum including natural history, poetry, Biblical translation and exposition of the scriptures. His earliest Biblical commentary was probably that on the book of the Revelation. He is credited with writing three known Latin hymns.

He is remembered chiefly for his "Ecclesiastical History of the English People." This five volume work records events in Britain from the raids by Julius Caesar in 55-54 BC to the arrival of the first missionary from Rome, Saint Augustine in 597.

Bede's writings are considered the best summary of this period of history ever prepared. Some have called it "the finest historical work of the early Middle Ages."

Bede's motive for recording history reminds us of his deepest desires. He clearly states his purpose in his writings when he says, "For if history records good things of good men, the thoughtful hearer is encouraged to imitate what is good; or if it records evil of wicked men, the good, religious reader or listener is encouraged to avoid all that is sinful and perverse, and to follow what he knows to be good and pleasing to God." (http://www.britannia.com/)


* * *
O God, who bring light to your Church through the learning of the Priest Saint Bede, mercifully grant that your servants may always be enlightened by his wisdom and helped by his merits. Through our Lord.
* * * * * *
Wednesday after the Fifth Sunday of Easter
O God, restorer and lover of innocence, direct the hearts of your servants towards yourself, that those you have set free from the darkness of unbelief may never stray from the light of your truth. 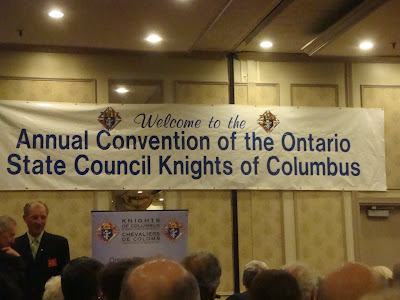 On Saturday, I attended the formal opening ceremonies of the 108th Annual Ontario State Convention of the Knights of Columbus. 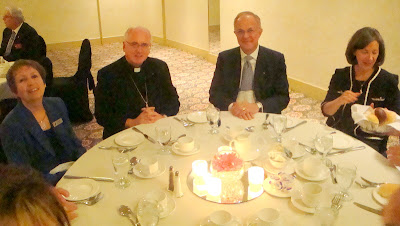 Supreme Knight Carl Anderson and his wife Dorian were present, as well as a large number of delegates from across the Province; several chaplains from the Ottawa Archdiocese were able to find replacements for weekend ministry to attend.  I was asked to address the assembly on the Catholic motivation for being a volunteer; I drew on the biblical principles of stewardship in shaping my talk.
Other photos: 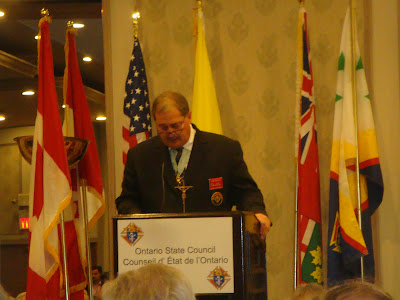 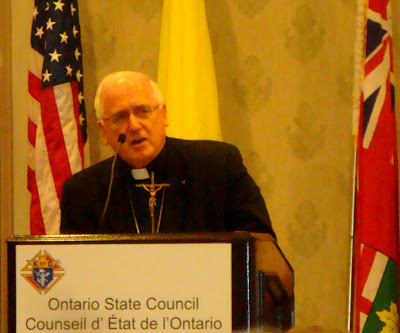 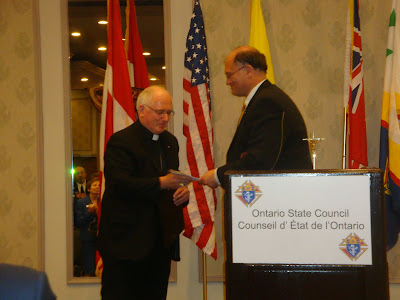 Posted by Archbishop Terry at 6:29 AM