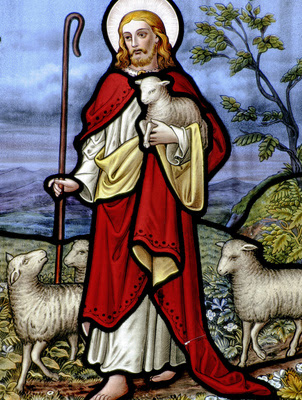 Almighty ever-living God, tend us to a share in the joys of heaven, so that the humble flock may reach where the brave Shepherd has gone before. Who lives and reigns with you.
* * * * * *
Leo XIII Published Rerum novarum 120 Years Ago One hundred twenty years ago today, Pope Leo XIII began a movement of social involvement by the Church in the great questions of the day by publishing his encyclical letter Rerum novarum ("Of New Things").
So significant was this, that subsequent popes have commemorated the anniversary with an updating of the Church's social teaching, sometimes descrived as the Church's "best kept secret".
On the 40th anniversary, Pius XI wrote Quadregesimo anno (May 15, 1931), on the 80th Paul VI composed Octagesima Adveniens (May 14, 1971) and John Paul II wrote Centesimus Annus on its centennial (May 1, 1991).
Pope Benedict XVI is unlikely to write a new social encyclical as Caritas in veritate on June 29, 2009 fulfills this challenge very well; it is an encyclical notable for linking protection of unborn life in the womb to social justice:
One of the most striking aspects of development in the present day is the important question of respect for life, which cannot in any way be detached from questions concerning the development of peoples. It is an aspect which has acquired increasing prominence in recent times, obliging us to broaden our concept of poverty[66] and underdevelopment to include questions connected with the acceptance of life, especially in cases where it is impeded in a variety of ways.
Not only does the situation of poverty still provoke high rates of infant mortality in many regions, but some parts of the world still experience practices of demographic control, on the part of governments that often promote contraception and even go so far as to impose abortion. In economically developed countries, legislation contrary to life is very widespread, and it has already shaped moral attitudes and praxis, contributing to the spread of an anti-birth mentality; frequent attempts are made to export this mentality to other States as if it were a form of cultural progress.


Some non-governmental Organizations work actively to spread abortion, at times promoting the practice of sterilization in poor countries, in some cases not even informing the women concerned. Moreover, there is reason to suspect that development aid is sometimes linked to specific health-care policies which de facto involve the imposition of strong birth control measures. Further grounds for concern are laws permitting euthanasia as well as pressure from lobby groups, nationally and internationally, in favour of its juridical recognition.


Openness to life is at the centre of true development. When a society moves towards the denial or suppression of life, it ends up no longer finding the necessary motivation and energy to strive for man's true good. If personal and social sensitivity towards the acceptance of a new life is lost, then other forms of acceptance that are valuable for society also wither away[67]. The acceptance of life strengthens moral fibre and makes people capable of mutual help. By cultivating openness to life, wealthy peoples can better understand the needs of poor ones, they can avoid employing huge economic and intellectual resources to satisfy the selfish desires of their own citizens, and instead, they can promote virtuous action within the perspective of production that is morally sound and marked by solidarity, respecting the fundamental right to life of every people and every individual. (#28)

Various colloquia are being held to mark this important anniversary.  Here is part of a report of one such meeting in the United States earlier this month (from the National Catholic Register):


At a time when workers continue to struggle for decent wages and rights, panelists at a conference marking the 120th anniversary of the encyclical Rerum Novarum made clear that the letter on labor and the rights of workers holds important contemporary lessons.
After a daylong series of panel discussions May 2 at The Catholic University of America about the historic and contemporary context of the 1891 encyclical that is considered the groundwork for the Church’s social teaching, a final session put the previous discussions into context.

Cardinal Peter Turkson, president of the Pontifical Council for Justice and Peace, said at a May 3 closing program that current times call for renewed efforts to fulfill the demands of Rerum Novarum.

He noted that the main functions of the state in the time of Pope Leo XIII and today are: pursuit of the common good, “which is not reduced to one’s nation, but considered from a world standpoint; awareness that this good cannot be limited to material goods but must include the moral good of society”; placing priority on people and families; respecting the free initiative of people; and aiding the neediest in society.

Putting those priorities into effect is necessary in these times, he said.

In an earlier interview with Catholic News Service and other news outlets, Cardinal Turkson fleshed out some of the themes of his remarks to the conference. He said numerous recent events point to the need for the modern world to take to heart the lessons of Rerum Novarum.

The efforts in several U.S. states to do away with collective bargaining by state employees and huge demonstrations in Italy and England at the beginning of the year mounted by students who were worried about their ability to find work are examples of insecurity among workers in many parts of the world, the cardinal said. 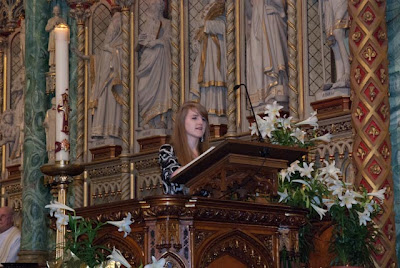 Last Sunday over one hundred couples celebrating significant anniversaries of marriage (60+, 50, 40, 25, 20, 15, 10 and 5) gathered at Notre Dame Cathedral Basilica to give thanks to God for their wedding anniversary and for the Church to congratulate them on their witness to married life over the years.
This afternoon again more than 100 francophone couples will renew their commitment to each other and receive a certificate marking their special anniversary year.
Here are photos from the May 8th celebration, courtesy of Heri Riesbeck: 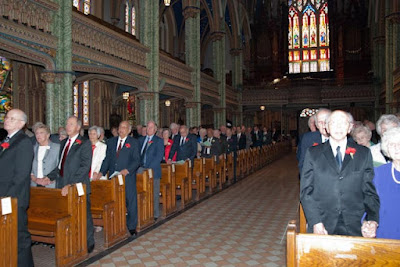 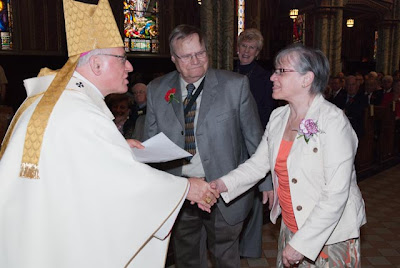 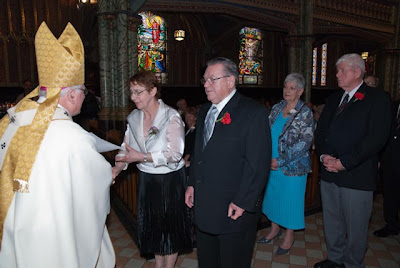 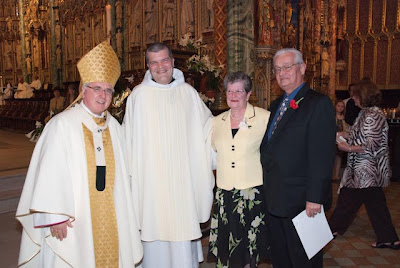 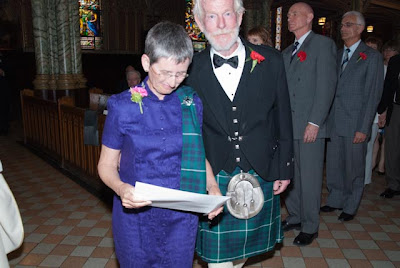 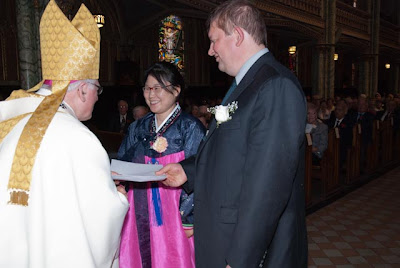 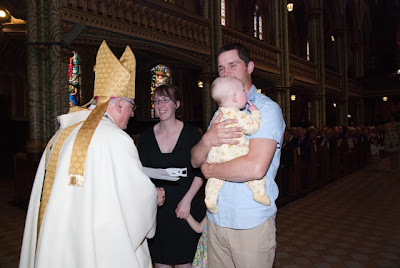 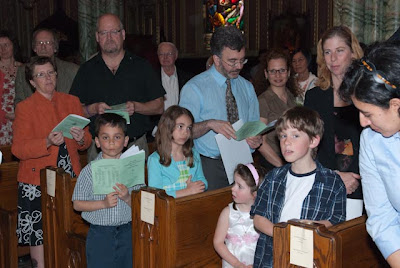 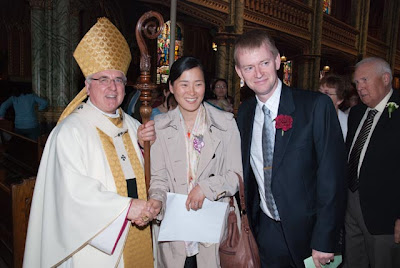 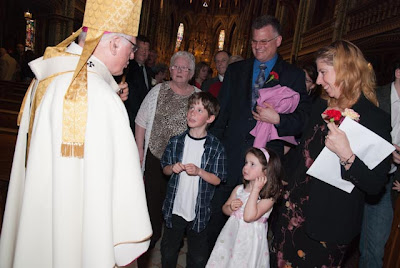 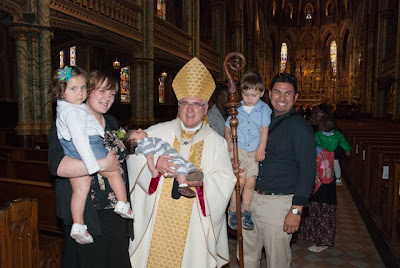 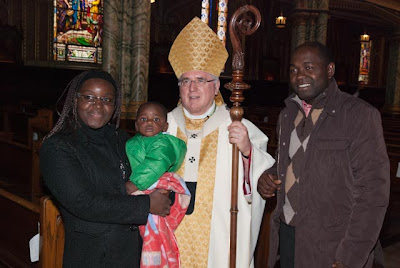 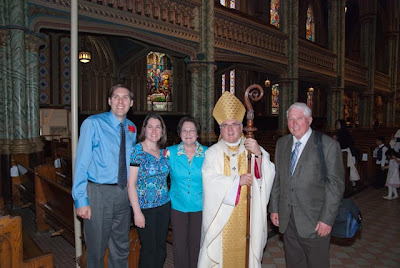 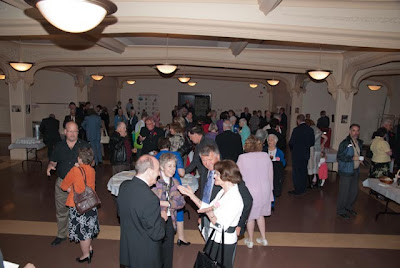 Posted by Archbishop Terry at 5:58 AM