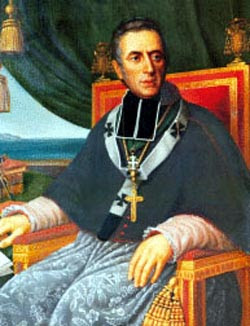 
“Go to Marseilles. There is a bishop there whose congregation is still small, but the man himself has a heart as big as Saint Paul’s, as big as the world,” –a contemporary bishop speaking of Bishop de Mazenod.


* * *
When I show visitors to my residence around the ceremonial first floor and give them a brief snapshot history of the bishops depicted in the gallery, I mention of our first bishop Joseph-Eugene-Bruno Guigues, that “he was sent to us by a saint”, whose memory the liturgy recalls today:

St. Eugene was the eldest son of Charles-Antoine De Mazenod and Marie-Rose Joannis. His mother was of the French middle class, convent educated, and wealthy; his father was an aristocrat, classically educated, and poor. Their marriage, and Eugene's home life, were plagued by constant family in-fighting, and interference from his maternal grandmother and a neurotic maternal aunt. The women never let his father forget that they brought the money to the family.

On 13 December 1790, at age eight, Eugene fled with his family to exile in Italy to escape the French Revolution. He spent eleven years in Italy living in Nice, Turin, Venice, Naples, and Palermo. While he learned Italian and German from dealing with people day to day, the bulk of his education came in Venice from Father Bartolo Zinelli, a local priest. In Palermo he was exposed to a wild and worldly life among rich young Italian nobles.

After the Revolution, his mother returned to France, but his father stayed in Italy, ostensibly for political reasons. Upon his own return to France in 1802 in an attempt to reclaim the family lands, Eugene tried to reunite his parents, but failed, and they were divorced, an unusual event in the early 19th century. His often unsupervised youth, the constant fighting at home, and the eventual break up of his family led to his patronage of dysfunctional families and those in them.

For years, Eugene struggled in himself, drawn on the one hand to the worldly life he knew from Palermo, and the beauty of the religious life he had seen in Venice with Don Bartolo. In an effort to work it out, Eugene began teaching catechism and working with prisoners in 1805. God won at last, assisted by a mystical experience at the foot of a cross on Good Friday 1807 when Eugene was momentarily touched by the full force of the love of God. He entered the seminary of Saint Sulpice, Paris in 1808 and was ordained on 21 December 1811 at age 29 at Amiens, France.

Because of his noble birth, he was immediately offered the position of Vicar General to the bishop of Amiens. Eugene renounced his family's wealth, and preferred to become a parish priest in Aix-en-Provence, working among the poor, preaching missions and bringing them the church in their native Provencal dialect, not the French used by the upper classes. He worked among the sick, prisoners, the poor, and the overlooked young. Eugene contracted, and nearly died from, typhus while working in prisons.

Eugene gathered other workers around him, both clergy and laymen. They worked from a former Carmelite convent, and the priests among them formed the Missionaries of Province who conducted parish missions throughout the region. They were successful, and their reputation spread, bringing requests for them outside the region. Eugene realized the need for formal organization, and on 17 February 1826 he received approval from Pope Leo XII to found a new congregation, the Oblates of Mary Immaculate founded on his core of missionaries.

Though he would have preferred to remain a missionary, Eugene knew that position with the Church hierarchy would allow him to insure the success of his little congregation. He was appointed Vicar-General of Marseille in 1823 then Titular Bishop of Icosia on 14 October 1832, and coadjutor in 1834 and finally bishop of Marseille, France on 24 December 1837 [ordained by Pope Gregory XVI].

He founded 23 parishes, built or restored 50 churches, cared for aged and persecuted priests, restored ecclesiastical discipline, and developed catechetics for young people. Started work on the cathedral and shrine of Notre-Dame de la Garde in Marseille. He welcomed 33 congregations of religious brothers and sisters into the diocese. More than doubled the number of priests in his diocese, and celebrated all ordinations himself.

Eugene realigned parishes and manoeuvered behind the scenes to weaken the government monopoly on education. He was an outspoken supporter of the papacy, and fought government intervention into Church matters. He publicly endorsed the dogma of the Immaculate Conception, and worked for its promulgation. His printed writings run to 25 volumes. Made a peer of the French Empire and elevated to Archbishop of Marseille in 1851 by Blessed Pope Pius IX. He was named a senator and member of the Legion of Honour by Napoleon III in 1856; proposed as cardinal in 1859.

On 2 December 1841, Bishop de Mazenod's first overseas missionaries arrived in Canada. By the time of his death, there were six Oblate bishops and over 400 missionaries working in ten countries. The Oblates continue their good work to this day with some 5,000 missionaries in 68 countries.

He died on 21 May 1861 at Marseille, France of cancer; on 12 December 1936, his body was exhumed and found to be intact; part of his heart is venerated at Blessed Sacrament Chapel at the Oblate-owned Lourdes Grotto of the Southwest in San Antonio, Texas, USA; he was beatified on 19 October 1975 by Pope Paul VI and canonized on 3 December 1995 by Pope John Paul II.


* * *
O God, who filled Eugene de Mazenod, your bishop, with apostolic virtue in the evangelization of the people, fill our hearts with the same fervour, that we may dedicate ourselves to the service of the Church and the salvation of all. Through our Lord.
* * *
Some quotations attributed to St. Eugene:

--“To love the Church is to love Jesus Christ, and vice versa.”

--“We glorify God in the masterpiece of his power and love...it is the Son whom we honour in the person of his Mother.”


* * *
This weekend in Brampton, Archbishop Thomas Collins will consecrate the new Church of St. Eugene de Mazenod:
* * * * * *
Collect for Saturday of Easter Week IV
O God, who in the celebration of Easter graciously give to the world the healing of heavenly remedies, show benevolence to your Church, that our present observance may benefit us for eternal life. Through our Lord.
Posted by Archbishop Terry at 6:34 AM