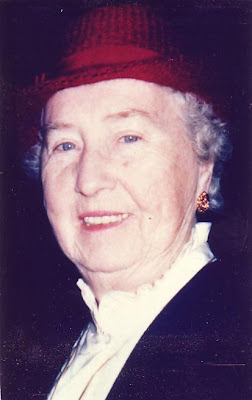 My siblings and I recall that a century ago, on this day in 1911, our mother, Marion Bridget Skerry was born to Thomas Skerry and Mary Prendergast in Widnes, Lancs., England.
After the death of her father, she and her mother, her sister Winifred and brothers Thomas and John arrived on the SS Doric in Quebec City on October 29, 1926.
The family moved to Montreal (Cartierville, then Snowdon) to begin a new life in Canada.  Eventually other family members moved away, joining other siblings who had immigrated earlier to the USA.
Marion married John Prendergast (January 22, 1906-November 15, 1970), of Cupids, Newfoundland, and they were blessed with five children (Vincent, Terrence, Marion, Kevin, John).
The family moved to the Ahunstic neighbourhood in 1949, where their home was made until 1972, shortly after John's death, when the house was sold.
Several years after John's death, Marion married a widower Eugene Joseph McCarthy on the Thanksgiving weekend  1976. Marion died on April 28, 1988 of inoperable stomach cancer.
On this centennial of her birth, my family and I give thanks for the love and life of faith she and John shared with their children.
Eternal rest grant unto them, O Lord, and let perpetual life shine upon them.
* * * * * *
Collect for Fourth Wednesday of Easter
O God, life of the faithful, glory of the humble, blessedness of the just, listen kindly to the prayers of those who call on you, that they who thirst for what you generously promise may always have their fill on your plenty. Through our Lord. 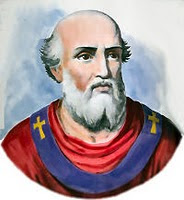 By birth, Pope John was a Tuscan, the son of Constantius. He was an archdeacon for several years before being elected Pope on the death of Pope St. Hormisdas in 523. He was a friend and confidant of the philosopher Boethius.
In 525 Pope John was sent to Constantinople by King Theodoric of the Ostrogoths to reverse the edict of the Emperor Justin against the Arians two years earlier, which required Arians to give back churches which they had taken from orthodox Catholics. Throdoric was himself an Arian and a strong defender of Arianism (a heresy which arose in the 4th century and denied the divinity of Christ).
Even though Theodoric wanted a reversal of Justin’s policy, Pope John did not comply with his wishes, refusing to support heresy, and only counseled the Emperor Justin to be more gentle in his overzealous dealings with the Arians.
The success that Pope John achieved was contrary to the wishes of Theodoric; rather, he was received as the Successor of Peter and all the bishops of the East, with the exception of one, affirmed their communion with him and his precedence as Bishop of Rome, notable by the fact that it was he who presided over the Easter liturgy in Constantinople on April 19, 526. Even the Emperor Justin prostrated himself at the Pope’s feet.
However, on his return to Rome, Theodoric, who had just murdered John’s good friend Boethius, and was furious with the outcome of the mission, had the Pope imprisoned in Ravenna where he died of starvation and ill treatment.
His body was taken to Rome where he now lies buried in the basilica of St. Peter.
* * *


O God, who reward souls that are faithful and who have consecrated this day by the martyrdom of Pope Saint John the First, graciously hear the prayers of your people and grant that we who venerate his merits may imitate his constancy in the faith. Through our Lord.


Posted by Archbishop Terry at 6:15 AM