The Pope's Message to Youth: His Own Experiences 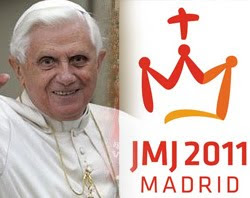 Recently, Pope Benedict released his message for World Youth Day XXVI to be held in Madrid, Spain from August 15-21, 2011.

Already preparations have begun in the Archdiocese of Ottawa, which will collaborate with the Archdiocese of Gatineau in spiritual gatherings, some simple Spanish lessons and fund-raising activities for this special internation assembly with Catholic youth from around the world.

The Pope's message for the coming WYD is taken from Paul's epistle to the Christians of Colossae: “Planted and built up in Jesus Christ, firm in the faith” (cf. Col 2:7).

In this letter, which is quite rich, the Holy Father alluded to his own youth and his search for values, speaking of feeling "hemmed in" by the Nazi youth activities he was forced to participate in, his reflection as a seminarian on whether it was possible to remain steadfast on a vocational path and his determination to be faithful and finally that it was the steady rock of Christ that he found that led him to want to write a life of Jesus Christ (the second volume will be published in Lent 2011) so that others might be rooted in Christ and grow to full stature in Him.

The whole letter is well-worth reading (just Google World Youth Day Message 2011 for one of the many sites that carry it). Here is the sample of Joseph Ratzinger's personal reflections I alluded to above.

FEELING "HEMMED IN" DURING NAZISM AND THE WAR

[...] In thinking of my own youth, I realize that stability and security are not the questions that most occupy the minds of young people. True enough, it is important to have a job and thus to have firm ground beneath our feet, yet the years of our youth are also a time when we are seeking to get the most out of life.

When I think back on that time, I remember above all that we were not willing to settle for a conventional middle-class life. We wanted something great, something new. We wanted to discover life itself, in all its grandeur and beauty. Naturally, part of that was due to the times we lived in. During the Nazi dictatorship and the war, we were, so to speak, “hemmed in” by the dominant power structure. So we wanted to break out into the open, to experience the whole range of human possibilities.

I think that, to some extent, this urge to break out of the ordinary is present in every generation. Part of being young is desiring something beyond everyday life and a secure job, a yearning for something really truly greater. Is this simply an empty dream that fades away as we become older? No! Men and women were created for something great, for infinity. Nothing else will ever be enough. Saint Augustine was right when he said “our hearts are restless till they find their rest in you”. [...]

THE CALL TO THE PRIESTHOOD: AN INVITATION TO FIDELITY 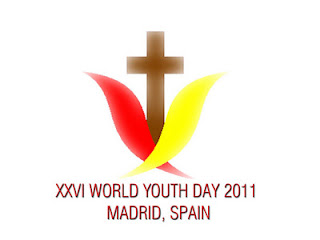 [...] There is a moment, when we are young, when each of us wonders: what meaning does my life have? What purpose and direction should I give to it? This is a very important moment, and it can worry us, perhaps for some time. We start wondering about the kind of work we should take up, the kind of relationships we should establish, the friendships we should cultivate...

Here, once more, I think of my own youth. I was somehow aware quite early on that the Lord wanted me to be a priest. Then later, after the war, when I was in the seminary and at university on the way towards that goal, I had to recapture that certainty. I had to ask myself: is this really the path I was meant to take? Is this really God’s will for me? Will I be able to remain faithful to him and completely at his service? A decision like this demands a certain struggle. It cannot be otherwise. But then came the certainty: this is the right thing! Yes, the Lord wants me, and he will give me strength. If I listen to him and walk with him, I become truly myself. What counts is not the fulfilment of my desires, but of his will. In this way life becomes authentic. [...]
* * *

WHY I'M WRITING THE BOOK ABOUT JESUS

[...] In the Gospel we find a description of the Apostle Thomas’s experience of faith when he accepted the mystery of the Cross and resurrection of Christ. Thomas was one of the twelve Apostles. He followed Jesus and was an eyewitness of his healings and miracles. He listened to his words, and he experienced dismay at Jesus’ death. That Easter evening when the Lord appeared to the disciples, Thomas was not present. When he was told that Jesus was alive and had shown himself, Thomas stated: “Unless I see the mark of the nails in his hands, and put my finger in the mark of the nails and my hand in his side, I will not believe” (Jn 20:25).

We too want to be able to see Jesus, to speak with him and to feel his presence even more powerfully. For many people today, it has become difficult to approach Jesus. There are so many images of Jesus in circulation which, while claiming to be scientific, detract from his greatness and the uniqueness of his person. That is why, after many years of study and reflection, I thought of sharing something of my own personal encounter with Jesus by writing a book. It was a way to help others see, hear and touch the Lord in whom God came to us in order to make himself known.

Jesus himself, when he appeared again to his disciples a week later, said to Thomas: “Put your finger here and see my hands. Reach out your hand and put it in my side. Do not doubt but believe” (Jn 20:27). We too can have tangible contact with Jesus and put our hand, so to speak, upon the signs of his Passion, the signs of his love.

It is in the sacraments that he draws particularly near to us and gives himself to us. Dear young people, learn to “see” and to “meet” Jesus in the Eucharist, where he is present and close to us, and even becomes food for our journey.

In the sacrament of Penance the Lord reveals his mercy and always grants us his forgiveness.

Recognize and serve Jesus in the poor, the sick, and in our brothers and sisters who are in difficulty and in need of help. [...] 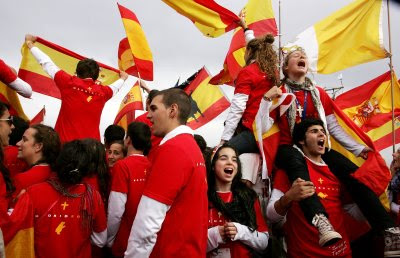 Dear young people, the Church depends on you! She needs your lively faith, your creative charity and the energy of your hope. Your presence renews, rejuvenates and gives new energy to the Church.

That is why World Youth Days are a grace, not only for you, but for the entire People of God. The Church in Spain is actively preparing to welcome you and to share this joyful experience of faith with you.

I thank the dioceses, parishes, shrines, religious communities, ecclesial associations and movements, and all who are hard at work in preparing for this event. The Lord will not fail to grant them his blessings.

May the Virgin Mary accompany you along this path of preparation. At the message of the angel, she received God’s word with faith. It was in faith that she consented to what God was accomplishing in her. By proclaiming her “fiat”, her “yes”, she received the gift of immense charity which led her to give herself entirely to God. May she intercede for each one of you so that, in the coming World Youth Day you may grow in faith and love.

I assure you of a paternal remembrance in my prayers and I give you my heartfelt blessing.

BENEDICTUS PP. XVI
August 6, 2010
Feast of the Transfiguration
Posted by Archbishop Terry at 7:01 AM