Today the liturgy recalls "Padre Pio", who was born in the small Italian village of Pietrelcina, joined the Capuchin Friars at the age of fifteen, and was ordained a priest seven years later.

For fifty years he lived at the monastery of San Stefano Rotundo, where his miraculous abilities as spiritual advisor, confessor and inercessor attracted the attention of the world.

Still, Padre Pio's humility--manifested through his constant devotion to the Eucharist--was perhaps the more impressive. He would often remark, "I only want to be a friar who prays." 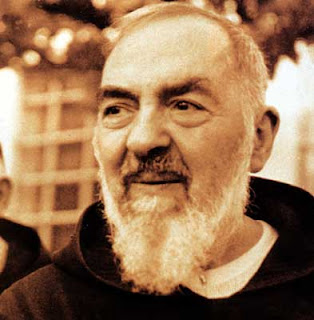 Almighty ever-living God,
who, by a singular grace,
gave the Priest Saint Pius
a share in the Cross of your Son
and by means of his ministry
renewed the wonders of your mercy,
grant that, through his intercession,
we may be united constantly
to the sufferings of Christ,
and so brought happily
to the glory of the resurrection.
Through our Lord.

The Lord called to himself recently in death two religious priests, natives of Toronto, who served God's people in Peru and Saskatchewan.

A native of Toronto, Msgr. Quinn was one of the first members of his community to arrive in Lima and was a founder of Our Lady of Carmel Parish in Miraflores, an upper-middle-class Lima neighborhood, where he also established a parish school.

After about two decades there, he was assigned to head the Territorial Prelature of Sicuani, an impoverished rural area in the Andean highlands of southern Peru.

He arrived in the Andes to minister among Quechua-speaking farmers in the 1960s, at a time of great upheaval in both the church and the country, said Carmelite Father Michael Sgariato, pastor at Our Lady of Carmel Parish.

The Second Vatican Council had just occurred, Peru was engulfed in a land reform movement and Latin American theologians were beginning to write and talk about a "preferential option for the poor."

"He had great sensitivity. It wasn't just a matter of the poor of Sicuani. He identified with the suffering of all women and men," Father Sgariato said. 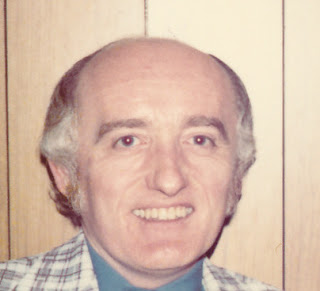 Father Donald V. Flynn died on September 17th in the 77th year of his life and 56th year of religious life.

In late July, he had welcomed me to the Loyola Jesuit Community in Montreal for a few days; on the day I departed, he left too, transferring to Rene Goupil House, the Jesuit Infirmary in Pickering, ON as the latter stages of cancer ravaged his health.

Born on Dec 1st, 1933 son of Vincent Flynn and Elizabeth Doyle in Toronto, Don Flynn entered the Society of Jesus in Guelph in 1954 after five years at St. Michael’s College School. He did his studies in theology at Collège de l'Immaculée-Conception in Montreal and was ordained a priest on June 3, 1967. 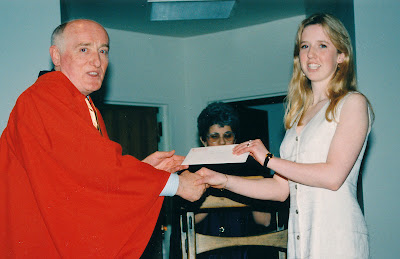 Father Flynn’s main ministry involved teaching French language and literature at Campion College in Regina from 1961 to 1964 and again from 1970 to 1995.

On his retirement from teaching he served as a retreat director at Villa Manrèse in Sainte-Foy, Quebec from 1995 to 2002. Then he moved to the Loyola Jesuit Community in Montreal and provided pastoral ministry in the Archdiocese.

Known in a number of parishes and appreciated for his homilies and general spiritual wisdom, Father Don led many people through the Spiritual Exercises and followed them with on-going spiritual direction.

A shy and charming person, he was quiet spoken and kindly, serving as a gracious guest master in the Loyola Community and giving a warm welcome to all.

His funeral took place in Toronto on Tuesday, with burial later that day at the Jesuit Cemetery in Guelph.

A Memorial Mass will be celebrated at Campion College, Regina, next Wednesday, September 29 (www.campioncollege.ca).
Posted by Archbishop Terry at 7:02 AM