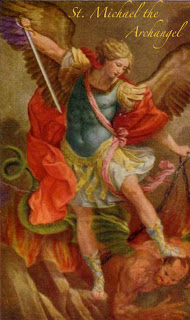 In the three and a half years since my arrival in Ottawa, I have come to admire the extraordinary beauty of Notre Dame Cathedral. With the help of interpreters, I am beginning to grasp the catechetical dimensions of the sanctuary and its vision of salvation history.

Above the gathering of patriarchs, prophets, apostles and saints in the alcoves, there is a whole panoply of angelic orders: The Cherubim and Seraphim, Thrones, Dominations, Virtues, Choirs, Principalities, Powers, Angels and Archangels.

Two of these are illustrated by specific designations: St. Michael the Archangel and the Guardian Angel  (both feasts occur this week).

This sense of the angelic protection God sends to humanity must have been very strong in the 19th century as this majestic decoration of the cathedral testifies.

In any case it is clear that our ancestors placed great stock in the knowledge that God is very close to us, caring for us and protecting us amid the trials and tribulations, joys and sorrows of our life in common and each of our individual lives.

Angels from God—the word angel means messenger—appear frequently in Scripture, but only Michael, Gabriel and Raphael are named. Michael appears in Daniel's vision as "the great prince" who defends Israel against its enemies; in the Book of Revelation, he leads God's armies to final victory over the forces of evil. Devotion to Michael is the oldest angelic devotion, rising in the East in the fourth century.

The Church in the West began to observe a feast honouring Michael and the angels in the fifth century. May this feast day help us continue in knowledge of God’s protecting love for all in this region.

O God, who dispose in marvelous order ministries both angelic and human, graciously grant that our life on earth may be defended by those who watch over us as they minister perpetually to you in heaven. Through our Lord.

On Thursday evening it was to hear a lively and informative presentation given by Sister Nuala Kenny of Dalhousie University, Halifax, on the topic of Euthanasia ("A Good Death: Understanding Decisions and Practices") to a packed hall. 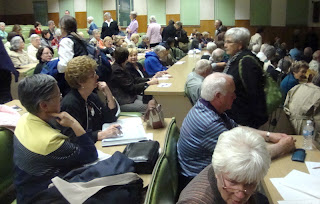 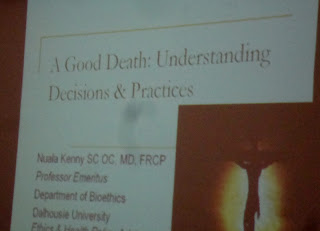 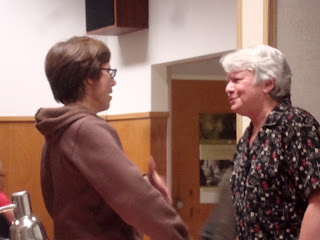 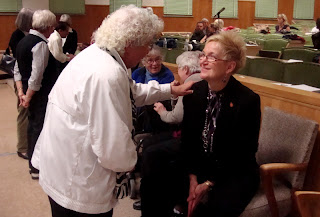 On Friday at midday, I returned to preside at the Mass of the Holy Spirit, inaugurating the 2010-2011 Academic Year. Afterwards, I took part in the unveiling of a plaque designating the large assembly hall as  the Alumni/ae Amphitheatre and joined the alumni/ae in a luncheon at which I won the first of the door prizes, a St. Paul's U tee-shirt. 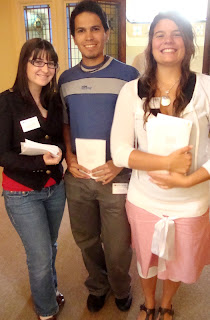 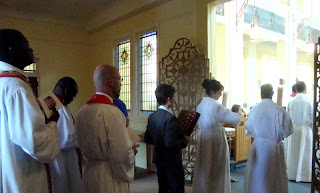 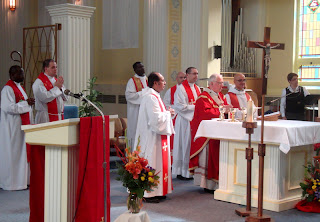 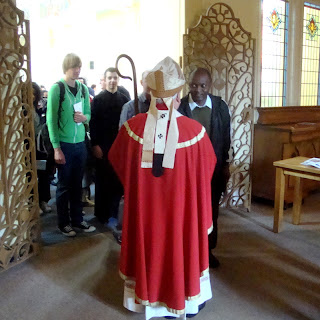 Posted by Archbishop Terry at 6:30 AM