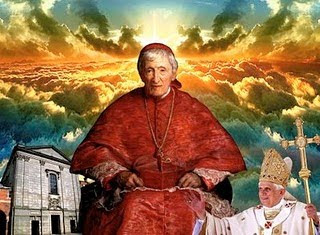 Q: Your Holiness, the figure of Cardinal Newman is very significant for you. And for Cardinal Newman you are making the exception of presiding over his beatification. Do you think that his memory might help to overcome the divisions between Anglicans and Catholics? And what are the aspects of his personality that you most wish to stress?

Benedict XVI: On one hand, Newman is, above all, a modern man who lived the whole problem of modernity, who also lived the problem of agnosticism, the problem of the impossibility of knowing God, of believing. A man who throughout his whole life was on a journey, on a journey to allow himself to be transformed by truth in a search of great sincerity and great willingness to know and to find and to accept the path that gives true life.

This interior modernity of his life implies the modernity of his faith. It is not a faith in formulas of past times but a very personal faith, lived, suffered, found in a long journey of renewal and conversion. He is a man of great learning who on one hand participates in our skeptical culture of today, in the question of whether we can be certain in our understanding about the truth of man, and how we can come to convergence in these truths.

A man with great learning and knowledge of the Church Fathers, who studied and renewed the origin and the gift of faith, thus recognizing the essentially interior figure. He was a man of great spirituality and of great humanism, a man of prayer, of a profound relationship with God and a deep relationship also with the people of his time.

Hence, I would say three elements in his life: the modernity of his existence with all the doubts and problems of our existence today; great learning, knowledge of the great treasures of the culture of humanity, and willingness for a permanent search, for permanent renewal; and spirituality, spiritual life with God.

These elements give this man an exceptional greatness in our time and because of this he is a figure of a doctor of the Church for us and for all, and a bridge between Anglicans and Catholics.

The final day of the visit is focused very much on the beatification of Cardinal John Henry Newman, and the Pope will celebrate that beatification in Cofton Park in Birmingham - adjacent, fittingly, to Rednal where Cardinal Newman was buried.

Pope Benedict will conclude the day by meeting with the bishops of England, Scotland and Wales in Oscott College.

HOMILY IN THE WESTMINSTER CATHEDRAL OF THE PRECIOUS BLOOD 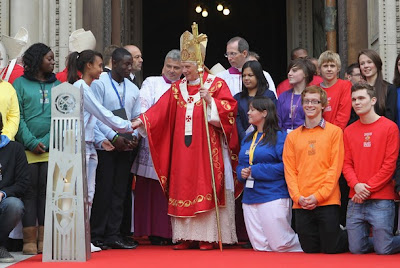 Dear friends, let us return to the contemplation of the great crucifix which rises above us. Our Lord’s hands, extended on the Cross, also invite us to contemplate our participation in his eternal priesthood and thus our responsibility, as members of his body, to bring the reconciling power of his sacrifice to the world in which we live.

The Second Vatican Council spoke eloquently of the indispensable role of the laity in carrying forward the Church’s mission through their efforts to serve as a leaven of the Gospel in society and to work for the advancement of God’s Kingdom in the world (cf. Lumen Gentium, 31; Apostolicam Actuositatem, 7). 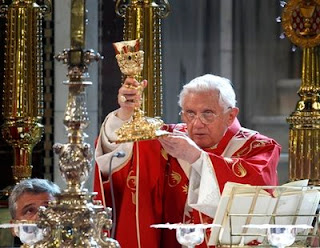 The Council’s appeal to the lay faithful to take up their baptismal sharing in Christ’s mission echoed the insights and teachings of John Henry Newman.

May the profound ideas of this great Englishman continue to inspire all Christ’s followers in this land to conform their every thought, word and action to Christ, and to work strenuously to defend those unchanging moral truths which, taken up, illuminated and confirmed by the Gospel, stand at the foundation of a truly humane, just and free society.

How much contemporary society needs this witness! How much we need, in the Church and in society, witnesses of the beauty of holiness, witnesses of the splendour of truth, witnesses of the joy and freedom born of a living relationship with Christ! One of the greatest challenges facing us today is how to speak convincingly of the wisdom and liberating power of God’s word to a world which all too often sees the Gospel as a constriction of human freedom, instead of the truth which liberates our minds and enlightens our efforts to live wisely and well, both as individuals and as members of society.

Let us pray, then, that the Catholics of this land will become ever more conscious of their dignity as a priestly people, called to consecrate the world to God through lives of faith and holiness. And may this increase of apostolic zeal be accompanied by an outpouring of prayer for vocations to the ordained priesthood. For the more the lay apostolate grows, the more urgently the need for priests is felt; and the more the laity’s own sense of vocation is deepened, the more what is proper to the priest stands out.

May many young men in this land find the strength to answer the Master’s call to the ministerial priesthood, devoting their lives, their energy and their talents to God, thus building up his people in unity and fidelity to the Gospel, especially through the celebration of the Eucharistic sacrifice.

This Sunday and next the gospels deal with the challenges that wealth presents to one who wants to be Christ's disciple. 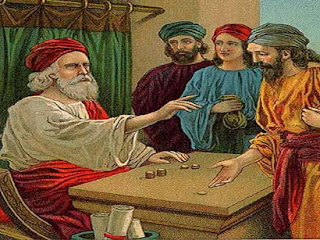 Both the story Jesus tells this weekend, of the 'dishonest steward' who merited praise because of his decisiveness, and the parable He will narrate next weekend, of the indecisive 'rich man' who ignored the 'poor Lazarus' at his door, invite a change of one's thinking about the role of money in relation to salvation.

Each parable also offers modern followers of Jesus something to ponder in regard to the proper stewardship of material goods.

The parable of the rogue manager has puzzled interpreters from the beginning. It is not unusual to have disreputable individuals figure in Jesus' parables, but this one is praised, suggesting he is worthy of imitation.

In what precisely was the manager dishonest? Some think it was in what he did when he had his master's creditors write down the amount they owed ("100 jugs of olive oil"..."take your bill and make it 50"; "100 containers of wheat"..."make it 80"). But the master had found fault with him before he settled on this course of action. The dishonesty, or perhaps we should say, his incompetence, had led to dismissal. So reducing the debts, as he did, may have been opportunistic, but it was probably not unjust to his master.

It is likely that the parable takes for granted an economic system in which the manager enjoyed quite a bit of latitude when letting out the goods entrusted to him to earn interest. The commission due on these transactions included a percentage for himself as well as for the owner of the goods. The master and the manager would share the commission earned on the materials traded.

Once he got his notice of termination, the manager acted shrewdly (in the economic circumstances of his day), by cancelling his cut of the interest due. He reckoned that this would be advantageous to him since his employment was ended.

Through a soliloquy we learn that the manager thought himself too weak to be a labourer and had too much self-respect to start begging. So the steward sensibly decided to create goodwill among people who, later on, would be able to offer him help or receive him into their homes. It was this capacity for quick, shrewd and decisive action--that would benefit him in the end--which merited his master's praise.

Jesus said that those who belong to God's Kingdom ('the children of light') ought to learn from those wise in the ways of the world. 'Make friends for yourselves", He says, 'by means of dishonest wealth, so that when it is gone, they may welcome you into the eternal homes'. Disciples should be ready to give away their wealth now so that when God's great end-time reversal takes place and the poor have privileged places (we will hear more of this in next week's gospel), the marginal and outcast may share with them God's hospitality.

Money is not 'unrighteous' in itself, but in the attitudes that its pursuit engenders. For if capital were inherently wicked, all use of it would be evil. In 1 Timothy 6:10, Paul says that it is the love of money that is the root of all evil. Pursuing money can have evil effects by making people selfish, causing them to use others to their advantage or as objects.

The pursuit of wealth tends to attach people to the things of this world. Sought as an end in itself, 'Mammon' quickly becomes a tyrannical master, a rival to God. Thus, Jesus concludes, 'No slave can serve two masters...you cannot serve God and money'.

Possessions, then, are a trust. How one uses them tests character, principles and capacity as a steward. One can be faithful or dishonest in little things and great. Generally one's exercise of responsibility in minor matters foretells what one would do in matters of great moment. If one is faithful in little things--like the use of money--God will entrust to such disciples 'true riches', making them stewards in God's Kingdom.
Posted by Archbishop Terry at 6:06 AM