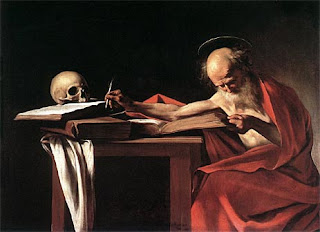 Today, the Church observes a Memorial of St. Jerome (b. 347 in Dalmatia - d. 419 in Bethlehem), Scripture scholar extraordinaire.

Born to a rich pagan family, Jerome led a misspent youth. Studied in Rome and became a lawyer. Converted in theory, and baptised in 365, he began his study of theology, and had a true conversion.

Becoming a monk, he lived for years as a hermit in the Syrian deserts. He is reported to have drawn a thorn from a lion’s paw; the animal stayed loyally at his side for years (and is often represented in paintings of St. Jerome; other symbols are the cardinal's hat, the Bible, the skull representing meditation on death, the last things).

Later, he became a priest, a student of Saint Gregory of Nazianzen, and secretary to Pope Damasus I who commissioned him to revise the Latin text of the Bible. The result of his 30 years of work was the (Latin) Vulgate translation, which is still in use.

Friend and teacher of Saint Paula, Saint Marcella, and Saint Eustochium, an association that led to so much gossip that Jerome left Rome to return to the desert solitude. He lived his last thirty-four years in the Holy Land as a semi-recluse. He wrote translations of histories, biographies, the works of Origen, and much more.

He is known as a doctor of the Church, indeed a Father of the Church. Since his own time, he has been associated in the popular mind with scrolls, writing, cataloguing, translating, which led to those who work in such fields taking him as their patron - a man who knew their lives and problems.

O God, who gave the Priest Saint Jerome a living and tender love for Sacred Scripture, grant that your people may be ever more fruitfully nourished by your Word and find in it the fount of life. Though our Lord.

Can there be a more fitting pursuit in youth or a more valuable possession in old age than a knowledge of Sacred Scripture?

In the midst of storms it will preserve you from the dangers of shipwreck and guide you to the shore of an enchanting paradise and the everlasting bliss of the angels...

“Wisdom overcomes evil: it stretches from end to end mightily and disposes all things sweetly. Her have I loved from my youth” (Wisdom 8:1)

On Saturday, I presided at the 4:30 anticipated Lord's Day Mass with medical students and professionals at St. Patrick's Basilica.  Afterwards, there was a festive dinner in the Scavi (parish hall).  Here's a photo, courtesy Deborah Gyapong: 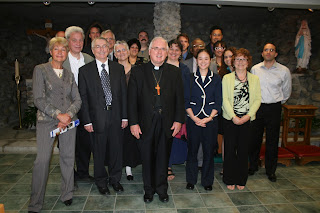 A Borgia Saint Born 500 Years Ago

This year marks the 500th anniversary of the birth of the saint who became the third superior general of the Jesuit Order. He died on this day in 1572; his feast is observed among Jesuits and in Spain on October 3.

St. Francis Borgia (1510-1572) gave up incredible wealth, power and privilege as a Spanish nobleman to enter the Society of Jesus where his experience brought him to leadership as the third superior general of the young Society of Jesus. The oldest son of the third duke of Gandía, Borgia was born in the family palace in Valencia. His great grandfather on his father's side was Pope Alexander VI, and his mother's grandfather was King Ferdinand the Catholic.

Like other young nobles he was trained for life at court and in 1522 was appointed page to his cousin Catherine, the sister of Emperor Charles V who invited him back to court after he studied philosophy for three years. In 1529 he married Leonor de Castro of Portugal, Empress Isabella's first lady-in-waiting. The 20 year-old Borgia was honoured by the Emperor who named him Marquis of Llombai and placed him in charge of the imperial household. During the next 10 years Francis and Eleanor had eight children and lived in great familiarity with Charles and Isabella until the Empress unexpectedly died May 1, 1539.

Her death led directly to Borgia's conversion when Francis accompanied the funeral cortege to the burial place in the royal chapel in Granada. When the coffin was opened, he saw not the beautiful face of the 36-year-old queen but a face beyond recognition. Not wanting to serve another master who would die, he began to devote himself to prayer and penance.

After he returned from Granada, he was appointed Viceroy of Catalonia in June 1539 and then became the fourth duke of Gandía after his father died four years later. He returned to the family palace to manage his estates, but when his wife Leonor died March 27, 1546, he resolved to dedicate the rest of his life to God's service. He was familiar with the Jesuits, having founded a Jesuit college in Gandía and being a personal friend of Father Peter Favre whom he asked to inform Ignatius of his decision. Ignatius welcomed him into the Society but recommended that he tell no one until he arranged affairs for his children and finished studying theology. Meanwhile, the founder of the Jesuits encouraged the duke to continue living as a nobleman. Francis pronounced his vows as a Jesuit on Feb. 1, 1548 and on Aug. 20, 1550 earned a doctorate in theology from the university which he himself had founded. 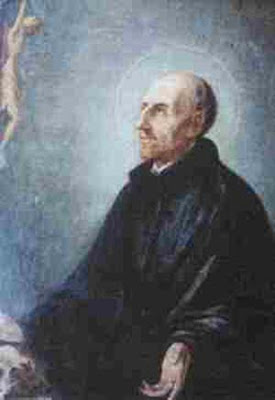 Since 1550 was a Holy Year, Francis took the opportunity to make a pilgrimage to Rome so he could visit Ignatius and arrange his public entrance into the Society of Jesus. He left his home in Gandía, never to see it again, and lodged in the Jesuit residence in Rome with Ignatius rather than taking Pope Julius III's offer to stay in the Borgia apartments in the Vatican. After living as a Jesuit from the end of October until early February 1551, he returned to Spain where he resigned his title in favor of his son, Carlos. As soon as he received the Emperor's letter accepting his resignation, Francis donned the Jesuit cassock. He was ordained a priest on May 23 and celebrated his first Mass in the chapel in the Loyola family home.

For a few years Borgia worked as an ordinary parish priest. In 1554 he was named Commissary General in Spain, with power over provincials in Spain and Portugal. He founded Spain's first novitiate, at Simancas, and set up over 20 schools. He did not attend the first general congregation, convened almost two years after Ignatius died, but did return to Rome in 1561 at Pope Pius IV's request. He was chosen to be vicar general when Father James Laínez, who succeeded Ignatius as superior general, attended the last session of the Council of Trent. Upon Laínez's return, Borgia became assistant for Spain and Portugal, and then was elected to succeed Laínez after his death in 1565.

Borgia served as the third superior general of the Jesuits for seven years and devoted himself to revising the Society's rules, expanding its missions in India and the Americas, and shepherding the growth of the young Society.

His final project was a mission to Spain accompanying Cardinal Michele Bonelli in an effort to secure Spain's help against the Turks. The two churchmen left Rome in June 1571 and arrived in Barcelona by the end of August. Borgia was overwhelmed by the reception he received from people who had known him as a nobleman and honoured his choice of religious life. In December Borgia left Spain for France to continue the diplomatic mission, but he fell ill from fever and pleurisy because of the unusually cold. He had to spend weeks resting in Turin on the return trip to Rome and then stayed with relatives in Ferrara during the summer. Finally he set out for Rome on Sept. 3, 1572, going to bed immediately upon his arrival. His final illness lasted three days before the 61-year-old general died during the night of September 30.
Posted by Archbishop Terry at 6:17 AM