O God, Eternal Shepherd, who govern Your flock with unfailing care, grant in Your boundless Fatherly love a pastor for Your Church who will please You by his holiness and to us show watchful care. Through our Lord Jesus Christ, Your Son, who lives and reigns with You in the unity of the Holy Spirit, one God, for ever and ever. Amen. 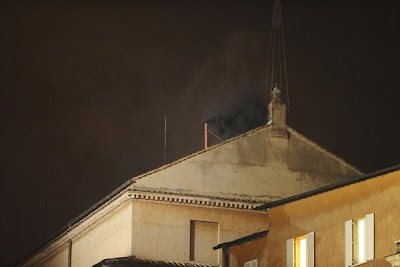 
This Sunday and next, the gospels of the day present us with text-critical issues. Today's gospel offers us a story that is included within the Fourth Gospel but clearly did not originally belong to it.

Next Sunday, the Passion Narrative of St. Luke contains two verses (22.43-44)—about an angel coming to console Jesus during an ordeal in prayer so great that His sweat became like drops of blood—which many scholars consider unauthentic, that is, not part of the evangelist's composition.

The manuscript tradition concerning Jesus' Passion-time prayer is quite divided. It is present in many fine manuscripts, but missing from some significant others. Scholarly judgment is divided as well, most arguments claiming that manuscript editors added or omitted the narrative on Christological grounds—to prove that Jesus was truly human or to remove a depiction that showed him as too human.

In prayer during the Passion, Jesus' emotional state became so intense that he perspired profusely as a result. The sweat beads multiplied on His body as if they were flowing clumps of blood and fell to the ground. Jesus realized the awful fate awaiting him and readied himself to face death because God, through the angel, had strengthened him for his mission.

Though a decision to include or exclude part of the Lukan account of Jesus' prayer on the Mount of Olives may appear subjective, it is another matter with the story of the woman taken in adultery. It is ruled out of the text or relegated to a footnote in most modern versions of the Bible. This is because editors have noted that it is missing from virtually all early Greek manuscripts and the earliest versions in ancient languages (Coptic, Syriac, the Old Latin).

All the early Church Fathers omit the narrative when they comment on chapters seven and eight of St. John. As well, the words and phrases used to tell the story are found nowhere else in John but are characteristic of the Synoptic gospels, especially Luke. And this may explain why it appears in some manuscripts after Luke 21.38, where Jesus is teaching in the Temple area.

Still, there can be little doubt that the event depicted occurred, even though in its written form it did not belong in the canonical books from the beginning. A similar story of a woman accused of many sins is told by Papias and recorded by the church historian Eusebius. The story bears parallels, too, with several other episodes in the Synoptic gospels (notably Luke 7.36-50).

In Jesus' time, the scribes were learned officials whose roles in the faith community combined those of lawyers, ethicists, theologians, catechists, even jurists. In this instance, they caught a couple in the act of adultery, though they placed the focus on the woman alone. This inequity in the treatment of the adulterers cannot help but evoke a sense of compassion in those who hear the story. The question they posed placed Jesus on the horns of a dilemma. Would Jesus uphold God's law and cause an unpopular punishment—death by stoning—to be carried out? Or would he instead disavow the law, thereby undermining his credibility as a preacher of God's ways?

Jesus' only response was silence and the enigmatic gesture of writing “with his finger on the ground”. Then came his challenge that cut all present to the heart, “Let anyone among you who is without sin be the first to throw a stone at her”.

All walked away, “one by one, beginning with the elders”. It was a powerful prophetic gesture that left him alone with the sinful woman. He elicited from her the confession that no one had condemned her. This led to Jesus' two-fold declaration of her liberation: “Neither do I condemn you”; and, “Go your way, and from now on do not sin again”.

Paul describes the resurrection of Jesus as the only source of authentic freedom. Earlier in his life as a good Pharisee, he had prized righteousness gained from observing the law. But having come to know the righteousness that comes “from God based on faith”, his outlook was transformed, made new: “I press on toward the goal for the prize of the heavenly call of God in Christ Jesus.”

Posted by Archbishop Terry at 4:27 AM