Wednesday afternoon in Toronto, we had just completed a meeting of the Ontario Priests Commission (after the close of the Winter-Spring 2013 Plenary Assembly of the Catholic Bishops of Ontario (ACBO) when the television monitor showed white smoke.  Bishops and priests were awe-struck that the election had come so quickly (on a hunch, I had been predicting white smoke for Thursday morning).

Realizing it would be almost an hour before the announcement would be made, I headed back to the Cardoner Jesuit Community where our young Jesuit scholastics reside while engaged in First Studies after their Novitiate and First Vows (philosophy, theology and social sciences or other disciplines)--the kind of community of which Father Borgoglio had been superior in Buenos Aires.

I joined the Jesuits in the recreation room where they were awaiting the announcement of the Pope's identity and name. As we heard Cardinal Tauran announce the name: Cardinal Bergoglio we were speechless for a few seconds until it all sunk in, then were immensely consoled (to use an Ignatian term), with just a tinge of family pride (sort of like all the Argentinians are feeling!)

I stayed for the first words by Pope Francis, quickly edited a generic statement I had drafted earlier, finished packing my bag and went to hail a cab to go to the Salt and Light TV studios for the taping of a special Conclave edition of Perspectives hosted by Kris Dmytrenko  (with fellow guests, Toronto Auxiliary Bishop William McGrattan and Dr. Moira McQueen, Executive Director of the Canadian Catholic Bioethics Institute).  In between, we arranged for a press conference for this morning at 10am at Notre Dame Cathedral, followed by a 12:15 Mass of Thanksgiving for the new pope's ministry.

CBC asked me to reprise an appearance on Evan Solomon's Power and Politics (earlier we discussed Pope Benedict's decision to resign his papal office) so I caught another taxi to their HQ on John Street, following which I headed to Billy Bishop Toronto City Centre Island Airport for the flight home to Ottawa on Porter Airlines.

Here is my statement sent out for the occasion:


ARCHBISHOP PRENDERGAST COMMENTS
ON THE ELECTION OF POPE FRANCIS 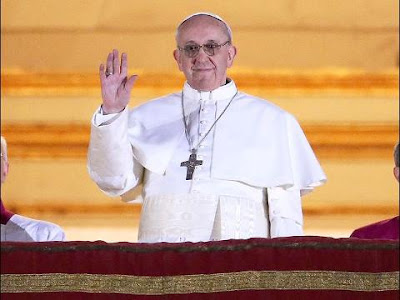 The Most Reverend Terrence Prendergast, S.J., Archbishop of Ottawa, on learning that Cardinal Jorge Mario Bergoglio, a Jesuit from Argentina, was elected Pope, made the following statement:

“It is with great joy and thanksgiving that I extend my fraternal greetings and prayerful best wishes on the election of Pope Francis to the Holy Father. This is truly a historic moment for the Church when Her universal character is manifested to the world!

I am convinced that today, more than ever, the world needs the humble and authentic witness of the Vicar of Christ fulfilling in his ministry the promise that Jesus made to the Apostolic College under Peter’s guidance: remember, I am with you always until the end of the age (Matthew 28.20).

The Petrine ministry is a great gift to the world and a prophetic sign of the heavenly Father’s continuing involvement in the lives of his people, manifesting providential concern for all, especially the poor and marginalized. Pope Francis has sent a powerful message in the choice of his name for the Church’s preferential option for the poor.

The Catholic Church in Ottawa looks forward with joyful hearts to celebrating a Mass of Thanksgiving on Tuesday, March 19th on the Solemnity of St. Joseph, Universal Patron and Guardian of the Church here at Notre Dame Cathedral in honour of our new pope.

Together, the Catholic community in Ottawa prays that the ministry of Pope Francis will continue the extraordinary contributions of Blessed Pope John II and of Pope Emeritus Benedict XVI.

The Church has been blessed by their example of personal holiness, profound teaching and true apostolic zeal for evangelization. We look forward with joyful anticipation to Pope Francis’s ministry as successor of St. Peter and Vicar of Christ.

In Canada, we celebrate the broad cross-section of the Church’s cultural richness and linguistic diversity. In our own local circumstances, we see manifest the oneness of the Universal Church and so we rejoice in a special way with a Pope from the Americas.

In these tumultuous times, we support with our prayer and personal good wishes Pope Francis’s ministry of the New Evangelization, spreading of the Good News of Jesus Christ as the answer to the search for the ultimate meaning of life that weighs heavily on the hearts of many across the world.”

Lord, source of eternal life and truth, give to Your shepherd, Pope Francis, a spirit of courage and right judgement, a spirit of knowledge and love; by governing with fidelity those entrusted to his care may he, as successor to the apostle Peter and vicar of Christ, build Your church into a sacrament of unity, love, and peace for all the world. Through our Lord Jesus Christ, Your Son, Who lives and reigns with You and the Holy Spirit, one God, forever and ever. Amen.

COLLECT FOR THE THURSDAY
IN THE 4TH WEEK OF LENT

We invoke your mercy in humble prayer, O Lord, that you may cause us, your servants, corrected by penance and schooled by good works, to persevere sincerely in your commands and come safely to the paschal festivities. Through our Lord Jesus Christ, your Son, who lives and reigns with you in the unity of the Holy Spirit, one God, for ever and ever.

Posted by Archbishop Terry at 12:13 AM