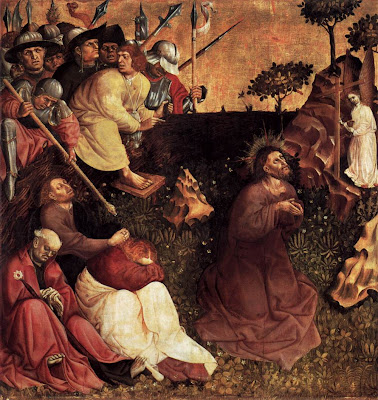 All of Lent is oriented to the Paschal Triduum, the three-day solemn observance of Holy Thursday, Good Friday and the Easter Vigil. Passion or Palm Sunday anticipates the pathos of Jesus' suffering and death, while the triumphal entry into Jerusalem in the processional entrance to the liturgy foretells the glorification of Christ's resurrection.

One of Isaiah's 'suffering servant' poems and Psalm 22, with their eerie evocations of the Passion, illustrate the overarching Lukan theme that “it was necessary [that is, was the divine will] that the Messiah should suffer these things and then enter into His glory” (24.26).

Paul's letter to the Philippians likely quotes an early Christian hymn about Christ Jesus' act of emptying Himself of equality with God by His obedience to God's plan that led to a shameful death on the cross. This, Paul claims, merited God's response of raising Him from the dead, highly exalting Him above all creation.

The consequence of this earth-shattering event is the world's coming to know, through proclamation of the gospel, of God's design that, at every mention of the name of Jesus, “every knee should bend, in heaven, on earth and under the earth, and every tongue should confess that Jesus Christ is Lord, to the glory of God the Father”.

Each evangelist, while making use of ancient Christian traditions concerning the last hours of Jesus, quotes the Scriptures to give to these moments his own reflections on these pivotal moments of salvation history.

For example, Mark gives a stark picture of the brokenness Jesus suffered on the cross (“My God, my God, why have you forsaken me? [15.34]), while Matthew, as he did with Jesus' infancy, shows how all that happened was “so that the scriptures of the prophets may be fulfilled” (26.56). John shows that, for the eyes of faith and despite appearances to the contrary, Jesus was in charge of all that transpired in the Passion which was the supreme moment of His glorification (“when Jesus knew that all was now finished, he said [in order to fulfil the scripture], ‘I am thirsty’” [19.28]).

Luke's account of the closing days of Jesus' ministry and his Passion draw out emphases given to the Lord's life earlier. At the time of Peter's confession, Luke emphasized that Jesus' messianic status was not political but religious (“the Messiah of God” [9.20]).

During the messianic act of entering Jerusalem, Luke shows this is not an act of political messianism. Rather he notes that those who acclaimed Jesus were not the citizens of Jerusalem but “the whole multitude of the disciples”. Their acclamations sought to praise God “for all the deeds of power that they had seen” in the healings that characterized Jesus' ministry. This is not simply the glorification of Jesus, but praise of God for Jesus.

In the Passion, Luke takes pains to show that the Roman authorities have no cause to fear the followers of Jesus. The accusation against Jesus, that he was “perverting our nation, forbidding us to pay taxes to the emperor, and saying that he himself is the Messiah, a king” (23.2) is judged unfounded by Pilate (“I have examined him in your presence and have not this man guilty of any of your charges against him” [23.14]). To underline this point, at Jesus' death, the centurion declares, “certainly this man was innocent”.

Just as Luke depicted Jesus at prayer at all the high points of His ministry (before the choice of the Twelve, at the Transfiguration, prior to Peter's confession), so, too, during the Passion. Jesus' reassured Peter, when foretelling his coming denials, that “I have prayed for you that your own faith may not fail”.

The prayer of Jesus on the Mount of Olives becomes an agony which leads him to pray more intensively, “Father, if you are willing, remove this cup from me; yet not my will but yours be done”.

With the comforting brought by the angel, Jesus regains his serenity and invokes the Father's pardon of those who crucify him (“Father, forgive them, for they do not know what they are doing”). Likewise, on the Cross, Jesus’ final prayer is one of confidently entrusting Himself to God, “Father into your hands I commend my spirit” with words that echo those of the psalmist (Psalm 31.5).

PRAYER FOR CANADA
ON PARLIAMENT HILL 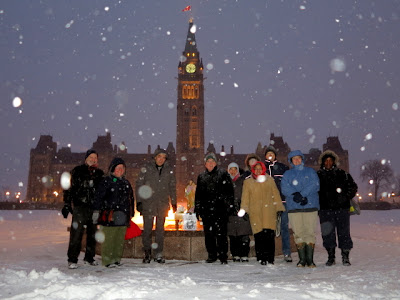 From March 11-19, a faithful group gathers each year at 6:15AM to pray the Novena to St. Joseph (and other prayers) for Canada and for the intentions of the Holy Father(s) and the Archbishop of Ottawa.

I was unable to attend this year until yesterday when a late winter was developing. Some photos after the devotions to mark the occasion (courtesy of Paul Lauzon), 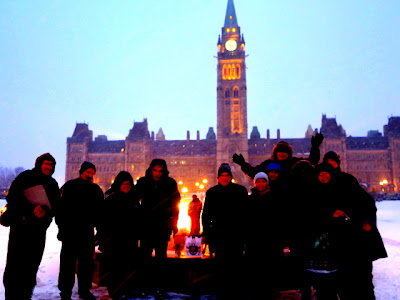 Posted by Archbishop Terry at 5:36 AM