Today's saints have been honored by the Church since the fourth century in Rome. History tells us that Saint Perpetua was of Carthaginian nobility and Saint Felicity was a slave girl but both were equal in their Christian faith.

The Roman martyrology says that they were sent to their deaths because of their Christian faith in A.D. 203. Since the wild beasts would not eat them they were put to death by the sword.

They are both mentioned in the Roman Canon [the First Eucharistic Prayer] of the Mass.

O God, at the urging of whose love the Martyrs Saints Perpetua and Felicity defied their persecutors and overcame the torment of earth, grant, we ask, by their prayers, that we may ever grow in your love. Through our Lord Jesus Christ, your Son, who lives and reigns with you in the unity of the Holy Spirit, one God, for ever and ever. 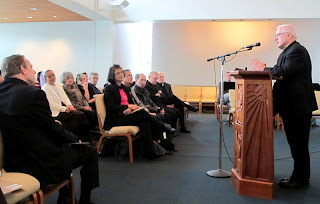 The Conference on the Second Vatican Council held at St. Mark's College (graduate theological studies) and Corpus Christi College (offering undergraduate courses) in Vancouver was a very pleasant and intellectually stimulating program.  On Friday evening to begin the symposium, Dr. Michael Attridge of Toronto's University of St. Michael's College reported on his research into the files of Bishop G. Emmett Carter's efforts to implement the directives of the Council in the London Diocese.

On Saturday morning, after Morning Prayer, I gave reflections on the link between liturgy and life, exploring the Constitution on the Liturgy (Sacrosanctum concilium) and the Pastoral Constitution on the Church in the Modern World (Gaudium et spes). Other simultaneous sessions on a wide variety of topics were held in the late morning and early afternoon: 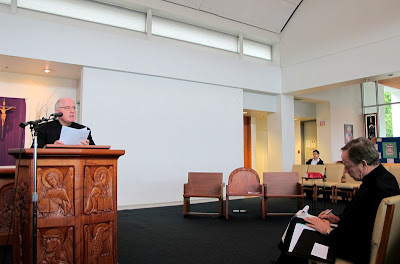 Archbishop Miller concluded the symposium by presiding and preaching at the Closing Mass.

Photos: Alistair Burns (The BC Catholic)

THURSDAY OF THE 3RD WEEK IN LENT

We implore your majesty most humbly, O Lord, that, as the feast of our salvation draws ever closer, so we may press forward all the more eagerly towards the worthy celebration of the Paschal Mystery. Through our Lord Jesus Christ, your Son, who lives and reigns with you in the unity of the Holy Spirit, one God, for ever and ever.

Posted by Archbishop Terry at 1:20 AM