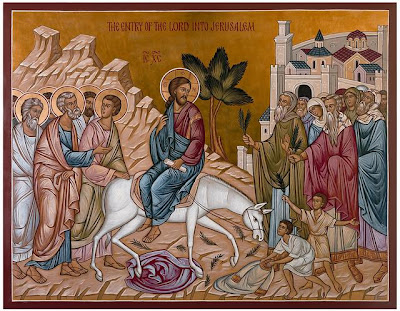 Prayer for Passion [Palm] Sunday
Almighty ever living God, who as an example of humility for the human race to follow caused our Saviour to take flesh and submit to the cross, graciously grant that we may heed its lesson of patient suffering and so merit a share in his Resurrection. Who lives and reigns with you.

When I survey the wondrous cross
on which the Prince of Glory died;
my richest gain I count but loss,
and pour contempt on all my pride.


Forbid it, Lord, that I should boast,
save in the death of Christ, my God;
all the vain things that charm me most,
I sacrifice them to his blood.


See, from his head, his hands, his feet,
sorrow and love flow mingled down.
Did e'er such love and sorrow meet,
or thorns compose so rich a crown.


Were the whole realm of nature mine,
that were an offering far too small;
love so amazing, so divine,
demands my soul, my life, my all.
[Text: Isaac Watts, 1674-1748]


From Saturday's National Post...
Archbishop Terrence Prendergast:
the missal is a new way to speak to God


Charles Lewis Apr 16, 2011 – 5:00 AM ET
Terrence Prendergast, the Roman Catholic Archbishop of Ottawa, served on the committee that oversaw the translation of the new Roman Missal, which will be introduced in November, on the first Sunday in Advent. He spoke to Charles Lewis this week about the importance of the new missal and how it may help strengthen the faith of Catholics.

Q. Why do you think the new missal is superior to the one the Church has used for the past 40 years?

A. It is better because it is more faithful to the original [Latin texts] and more appropriate for worship. The translation principle in vogue in the 1960s and early 1970s was called “dynamic equivalence,” which, frankly speaking, tends to be more subjective about what the text means. On trips to Rome, for example, I would bring with me Living with Christ and Prions en Eglise (the two Canadian missalettes) and would sometimes also hear the prayers in Italian. At times, it was hard to conceive that these texts were translations of the same Latin base text.

Q. Is it more sacred language?

A. There are different types of speech: for the pub, at work, on television talk shows; and another more suitable for worship. The early translation was more pedestrian, let us say; this one has a higher literary register, though still familiar, as is fitting for sons and daughters of God.

Q. Proponents of the new missal say if nothing else the new language will force people in the pews to think more about what they’re saying and think about what it means. Do you agree?

A. Yes, especially at first when the translation will be strikingly novel. I believe the people in the pews will adapt to the translation fairly quickly; however, the priests will need a bit more time and the laity will need to be patient with them.
When it comes to certain terms — for example, speaking of the death of Jesus “for many” rather than [the current] “for all” — it will be an apt opportunity for teaching and clarifying Church doctrine. Similarly with the statement in the Creed that says Jesus is “consubstantial” with the Father rather than “one in being.” People will wonder and puzzle over texts and this will give priests and deacons an opportunity to teach the nuances of the faith.

Q. Will this be the last translation for the forseeable future?

A. I would hope so; there are many other liturgical texts that need to be translated besides the Mass, the rite of baptism, the marriage ceremony, funeral rites. Perhaps after another 40 years we can look at the present translation of the Missal and decide whether another version is needed. The way language keeps evolving, however, I suspect we may need another version in half that time.

A. Well, I used to teach Latin, so working on this project was a wonderful challenge. The awkwardness is only the initial response, until one understands what the text is trying to say. Then, my experience is one of discovering the riches in prayers that come from as far back as the fifth and sixth centuries. One realizes these were prayed by Sts. Benedict and Scholastica, Francis and Clare, Teresa of Avila and John of the Cross; we missed out on some of the richness of these texts and now we will benefit from them.


Posted by Archbishop Terry at 6:15 AM