Prayer of the Fifth Sunday of Lent
By your help, we beseech you, Lord our God, may we walk eagerly in that same charity with which, out of love for the world, your Son handed himself over to death. Through our Lord. 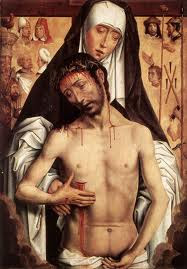 PASSIONTIDE refers to the last two weeks of Lent, when the readings and prayers of the liturgy focus on the Passion of Our Lord. The word "passion", in the Christian sense, does not mean an intense emotion; it refers to the historical events of Jesus' suffering and death.

Although for several centuries the Fifth Sunday of Lent was known as Passion Sunday, after the Second Vatican Council this name was restored to the Sunday at beginning of Holy Week , formerly called Palm Sunday.

As a penitential season of the Church, Passiontide is evidently even more ancient than Lent.  As such this two-week period affords those who have neglected or have slackened in their penitential exercises of Lent (prayer, fasting and almsgiving) to begin anew.

In some parishes, the tradition of veiling the statues and crucifixes (the latter until Good Friday, the former until the Easter Vigil) is observed.

Posted by Archbishop Terry at 6:33 AM