Prayer for the Fifth Monday of Lent
O God by whose wondrous grace we are enriched with every blessing, grant us to pass from former ways to newness of life that we may be made ready for the glory of the heavenly Kingdom. Through our Lord.

Today, the liturgy permits a simple commemoration of Stanislaus (1030-1079), the patron saint of Poland, who was killed by King Bolesław II after using his position as bishop of Kraków to denounce that monarch.
His story has parallels with that of St Thomas Becket, whose murder was authorized by King Henry II almost a century later. Both saints have inspired admiration in some and scepticism in others.

One of Stanislaus’s greatest devotees was John Paul II, who in 1979 devoted his first Apostolic Letter, Rutilans Agmen, to the saint. The letter expressed his wonder that he, a successor of Stanislaus in the see of Kraków, should, “by the inscrutable designs of God”, have been elected Pope in the 900th anniversary year of his predecessor’s martyrdom.


In truth, very little is known of Stanislaus. No contemporary biography has survived; and the earliest account of his life was produced by a Dominican monk at the time of Stanislaus’s canonization, 174 years after his death.


We learn that the saint was born into a noble family at Szczepanow, some 50 miles east of Kraków, and educated at Gniezno, possibly also in Paris. Ordained a priest, he won such a reputation for eloquence and sanctity that the Bishop of Kraków offered to resign in his favour.


Stanislaus refused this invitation but after the bishop’s death was acclaimed as his successor by popular choice. When he showed signs of demurring Pope Alexander II ordered him to accept.


For seven years Stanislaus proved a model bishop, and the only man in Poland who dared to confront King Bolesław II. According to taste this monarch has been dubbed the Generous, the Bold, or the Cruel.

Certainly Bolesław was a formidable warrior; in addition he has been credited with the foundation of many churches and monasteries throughout Poland.


Nevertheless, Stanislaus chastized him for his wicked and immoral life, in particular for abducting a nobleman’s wife to his palace. Some historians, however, have suggested that the bishop had allowed himself to be inveigled into taking part in a plot against the king.


At all events, when Bolesław showed no disposition to repent, Stanislaus excommunicated him. The infuriated monarch made his way to the chapel outside Kraków where the bishop was hiding, and ordered his guards to kill him.


Unlike the knights who murdered Thomas Becket, Bolesław’s henchmen had no stomach for the task. Furious, the king himself entered the church and slew Stanislaus, in some versions as he was celebrating Mass. The body was then hacked to pieces and thrown into a pool, wherein (we are told) it miraculously re-integrated.


Bolesław II was obliged to flee to Hungary, where he was assassinated four years later.


In 1245 Stanislaus’s remains were re-housed in Wawel Cathedral, Kraków. His sarcophagus became a national shrine, before which almost every Polish king was crowned (http://www.catholicherald.uk.co/ Saint of the Week).

* * *
O God, for whose honour the Bishop Saint Stanislaus fell beneath the swords of his persecutors, grant, we pray, that we may persevere strong in faith even until death. Through our Lord.

Today, friends and associates of the comedian Roger Abbott will gather to remember him and the joy he brought into so many people's lives. Chief among these will be Don Ferguson, his long-time side-kick (dating from their time as teenagers at Loyola High School, Montreal).
Boyhood and high school friendships can be very special. And though Roger and Don (LHS '63) were a couple of years behind me (LHS '61), we developed a friendship through stage activity, talent shows and the school newspaper.
Though our paths did not often cross, the news of Roger's passing surfaced memories of my enjoyment at listening to the antic comedy acts Don, Roger, Luba Goy and the Air Farce regulars performed on the radio and of occasionally seeing them on tv.
Their switch to television came about the time that I got into my ministry as a bishop and so I couldn't often be home at the times they were on. More recently, I enjoyed meeting them when Roger and Don were in Ottawa for a brief performance just after I arrived in the Capital.
The day after I heard the news of Roger's death, I celebrated Mass for the repose of his soul and for the consolation of his family and the many friends, associates and fans he left behind.  So I will be with them in spirit this evening.  R.I.P.

* * * * * *
Meeting up with Uma
Last week, I stole a few hours from a free evening of the Bishops Assembly to slip over to the Danforth and Pape area to visit with my nephew Mark and his wife Aarthi and get acquainted with my grand-niece who was born just before Christmas.
We had a brief chat about the personalities of newborns, including my recollections of Mark in the mid-1970s.  Here are a few pix of Mom and Dad with their daughter and one of Uman with her great-uncle. 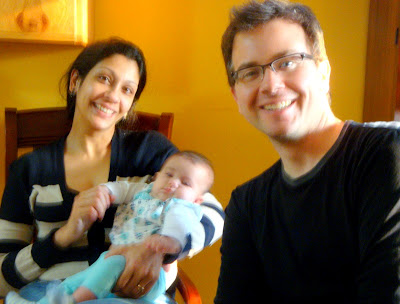 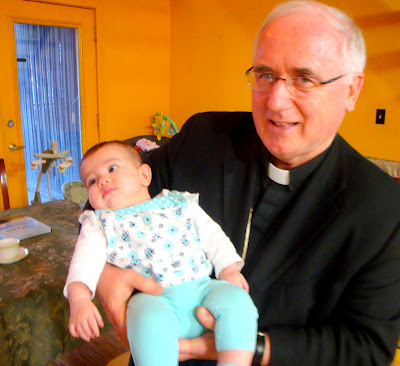 Posted by Archbishop Terry at 7:29 AM