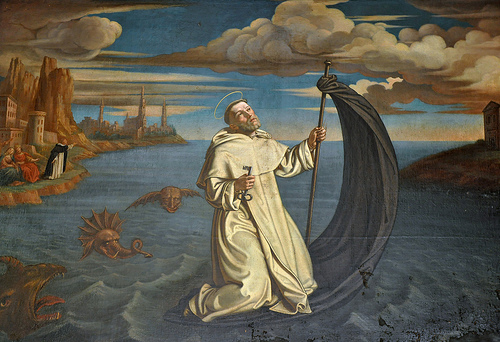 While the universal church was permitted the Optional Memorial of St. Raymond Penafort yesterday, in Canada this memorial is delayed one day in our liturgical calendar, since St. Andre Bessette has recently been assigned a liturgical memorial on January 7.

Saint Raymond of Penafort was the third Superior-General of the Dominican Order; he was born in Spain in 1175 and died there on January 6, 1275 at the age of 99.

He was the gifted son of the count of Penafort in Catalonia, Spain. Due to his status and wealth, he was well educated and at the age of 20, was already a professor of philosophy. He earned his doctorate in both canon and civil law at the age 41. He taught canon law in Bologna, Italy, and it was there that he first met the Dominicans.

Attracted to the Dominican Order by the preaching of Blessed Reginald of Bologna, he received the Dominican habit at the age of 47. Raymond had a strong devotion to Our Blessed Mother, and it was this devotion that led him to forgo worldly fame and become a Dominican.

The Order made good use of his legal skills by assigning him the task of collecting and organizing all the laws and rules of the Church. At the order of Pope Gregory IX, St. Raymond produced a collection of canon law. He also published several editions of the Summa Casuum – a guide for confessors and moralists on the rules for judging and penances to be assigned to various sins. As a result of his strong influence in academia, his virtuous character, his great works, and his gift for preaching, many were drawn to the Dominican Order and there was an influx of vocations. He was famous for his preaching to Moors and Christians throughout Spain. and was convinced that Christians could only convert others if their own lives set an example of selflessness and holiness.

In 1235, Pope Gregory named him archbishop of Tarragona, but sickness and his pleadings to be relieved of such a duty encouraged the pope to replace him with another, and Raymond returned to his solitude and contemplation in Barcelona as he convalesced from a serious illness. Rejuvenated by the peaceful life of the priory in Barcelona, he resumed his work as a preacher and confessor, and was successful in making many conversions.

In 1238, Raymond was elected Master General of the Dominicans by the general chapter held in Bologna. He made the visitation of his order on foot without discontinuing any of his penances or religious exercises. As Spiritual Father, he instilled in his spiritual children a love of contemplation, solitude, studies, and apostolic works.

During the last 30 years of his one hundred years of life he lived in prayerful obscurity, giving to others the fruits of his contemplation and labour. On his deathbed he was visited by Alphonsus, the king of Castile, and James I of Aragon, one of his penitents. Saint Raymond is best remembered in the Church as a wise and holy confessor. He was appointed at different times as confessor to the pope and king, and as a papal penitentiary he pronounced on difficult cases of conscience.

Symbols: Saint Raymond is often portrayed as a middle-aged Dominican crossing the sea on his cloak. He may be a Dominican holding a book and teacher's wand, or with the Virgin and Child appearing to him. Also, he may be pictured holding a key, the symbol of confession. Patronage: He is the patron saint of lawyers, including canon lawyers, and schools and faculties of law.

O God, who adorned the Priest Saint Raymond with the virtue of outstanding mercy and compassion for sinners and for captives, grant us, through his intercession, that, released from slavery to sin, we may carry out in freedom of spirit what is pleasing to you. Through our Lord Jesus Christ, your Son, who lives and reigns with you in the unity of the Holy Spirit, one God, for ever and ever.

After detailing at some length John's preaching ministry, which culminated in the Baptist's imprisonment by Herod Antipas (3:1-20), Luke offered his readers a terse description of Jesus' baptism (3:21-22).

The son of Herod the Great, Antipas ruled Galilee and Perea from 4 B.C to 39 A.D. John the Baptist had rebuked Herod publicly for his unlawful marriage to Herodias and “because of all the evil things he had done”. Herod's worst crime was to silence the criticism of his morals by locking John up in the hilltop fortress of Machareus where later he would meet a martyr's death.

By contrast with the ruler who shirked responsibility for his immorality, Jesus—one who was innocent and without sin—stood in solidarity with sinful humanity, coming to be baptized with repentant Israelites (“all the people were baptized”). Jesus underwent John's water baptism which imaged and pointed toward that greater baptism in the Holy Spirit, which he would confer after his death and resurrection.

Only the evangelist Luke notes that Jesus was at prayer at the time of his baptism. This observation is part a Lukan pattern, which depicts Jesus praying on numerous occasions: such as on the night before he chose his twelve apostles and delivered the great inaugural sermon (6.12); prior to eliciting Peter's confession that he was the “Messiah of God” (9.18); at the Transfiguration (9.29); and as a prelude to instructing his disciples to pray the “Lord's Prayer” and to trust in God's eagerness to give them the Holy Spirit (11.1-13).

Luke says that Jesus told His disciples a parable about a widow who insistently sought and obtained justice from an unjust judge in order to illustrate “their need to pray always and not to lose heart” (18.1-8).

While prayer is especially fitting in moments of crisis (for example, in the Garden of Gethsemane Jesus “prayed more earnestly, and his sweat became like great drops of blood falling down on the ground” [22.44]), it ought, as well, to characterize the daily routine of disciples as it did the life of their Master.

Luke's description of Jesus' baptism showed his devotion and nearness to God—that he looked to God the Father at every stage of his mission. This impression is heightened by two elements: the physical sign of the Spirit descending upon Jesus and the endorsement of Jesus through God's voice from heaven, “You are my Son, the beloved; with you I am well pleased”.

The voice from heaven addressed Jesus in terms that echo biblical texts, though which ones precisely is debated by scholars. Good cases can be made that Psalm 2.7 (a royal psalm which would identify Jesus as God's Son with regal powers) and Isaiah 42.1 (a text which would proclaim Jesus as God's humble, Spirit-led servant) underlies the gospel's formulation of God's approval of Jesus.

But the experience of Jesus' baptism was not only his own. For with the opening of the heavens came the Spirit's descent. The visible nature of this occurrence is manifest in the description of the Spirit's coming on Jesus “in bodily form like a dove”. Two passages from Genesis (God's brooding over the waters at creation [1.2] and Noah's dove [8.8-12] symbolizing the end of judgment and the beginning of grace) suggest that what happened in Jesus' baptism inaugurated a new era in divine-human relations.

Second Isaiah's proclamation of the dawning of a new era began with words of consolation, “Comfort, O comfort my people”. For Israel's sins had been atoned (“her penalty is paid ... she has received from the Lord's hand double for all her sins”), a reality Christians believe has been definitively achieved in the obedient disposition of Jesus' identification with sinners.

In other words, what Jesus accomplished on the Cross began at his baptism. The time of Israel's dispersal is also ended; the time for unity has come (“the Lord God will feed His flock like a shepherd”).

The epistle to Titus comments on the new beginning for humanity which started in Jesus' baptism and extends to more and more people through Christian baptism: “When the goodness and loving kindness of God our Saviour appeared, he saved us, not because of any works of righteousness that we had done, but according to his mercy, through the water or rebirth and renewal by the Holy Spirit”.
Posted by Archbishop Terry at 6:45 AM