Today is the eighth day of Christmas and the Solemnity of Mary, the Mother of God, a holy day of obligation in Canada and the United States.

This feast is the octave of Christmas. In the modern Roman Calendar only Christmas and Easter enjoy the privilege of an octave. According to the 1962 Missal of Bl. John XXIII the Extraordinary Form of the Roman Rite, today is the Solemnity of Circumcision and Naming of Our Lord; for this reason it is the titular feast of the Society of Jesus. (John Paul II introduced the feast of the Holy Name of Jesus on January 3, which will be displaced liturgically this year by the Solemnity of the Epiphany, transferred in Canada and the USA from its traditional location on January 6th to the Sunday between January 2nd and 8th).

"Mary, the all-holy ever-virgin Mother of God, is the masterwork of the mission of the Son and the Spirit in the fullness of time. For the first time in the plan of salvation and because his Spirit had prepared her, the Father found the dwelling place where his Son and his Spirit could dwell among men. In this sense the Church's Tradition has often read the most beautiful texts on wisdom in relation to Mary. Mary is acclaimed and represented in the liturgy as the "Seat of Wisdom." — Catechism of the Catholic Church # 721 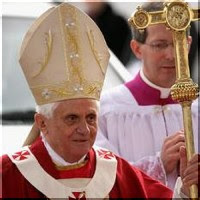 BLESSED ARE THE PEACEMAKERS

EACH NEW YEAR brings the expectation of a better world. In light of this, I ask God, the Father of humanity, to grant us concord and peace, so that the aspirations of all for a happy and prosperous life may be achieved.


Fifty years after the beginning of the Second Vatican Council, which helped to strengthen the Church’s mission in the world, it is heartening to realize that Christians, as the People of God in fellowship with him and sojourning among mankind, are committed within history to sharing humanity’s joys and hopes, grief and anguish, as they proclaim the salvation of Christ and promote peace for all.

In effect, our times, marked by globalization with its positive and negative aspects, as well as the continuation of violent conflicts and threats of war, demand a new, shared commitment in pursuit of the common good and the development of all men, and of the whole man.

It is alarming to see hotbeds of tension and conflict caused by growing instances of inequality between rich and poor, by the prevalence of a selfish and individualistic mindset which also finds expression in an unregulated financial capitalism. In addition to the varied forms of terrorism and international crime, peace is also endangered by those forms of fundamentalism and fanaticism which distort the true nature of religion, which is called to foster fellowship and reconciliation among people.

All the same, the many different efforts at peacemaking which abound in our world testify to mankind’s innate vocation to peace. In every person the desire for peace is an essential aspiration which coincides in a certain way with the desire for a full, happy and successful human life. In other words, the desire for peace corresponds to a fundamental moral principle, namely, the duty and right to an integral social and communitarian development, which is part of God’s plan for mankind. Man is made for the peace which is God’s gift.

All of this led me to draw inspiration for this Message from the words of Jesus Christ: “Blessed are the peacemakers, for they will be called children of God” (Mt 5:9).

This is the opening of the Holy Father's 2013 Message for the 46th annual World Day of Prayer for Peace.  To read the complete text, go to:
http://www.vatican.va/holy_father/benedict_xvi/messages/peace/documents/hf_ben-xvi_mes_20121208_xlvi-world-day-peace_en.html