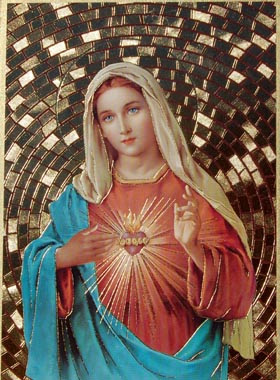 
The attention of Christians was early attracted by the love and virtues of the Heart of Mary. The Gospel itself invited this attention with exquisite discretion and delicacy. What was first excited was compassion for the Virgin Mother. It was, so to speak, at the foot of the Cross that the Christian heart first made the acquaintance of the Heart of Mary. Simeon's prophecy paved the way and furnished the devotion with one of its favourite formulae and most popular representations: the heart pierced with a sword. But Mary was not merely passive at the foot of the Cross; "she cooperated through charity", as St. Augustine says, "in the work of our redemption".

It is only in the twelfth, or towards the end of the eleventh century, that slight indications of a regular devotion are perceived in a sermon by St. Bernard (De duodecim stellis).

Stronger evidences are discernible in the pious meditations on the Ave Maria and the Salve Regina, usually attributed either to St. Anselm of Lucca (d. 1080) or St. Bernard; and also in the large book De laudibus B. Mariae Virginis (Douai, 1625) by Richard de Saint-Laurent.

In St. Mechtilde (d. 1298) and St. Gertrude (d. 1302) the devotion had two earnest adherents. A little earlier it had been included by St. Thomas Becket in the devotion to the joys and sorrows of Mary, by Blessed Hermann (d.1245), one of the first spiritual children of St. Dominic, in his other devotions to Mary, and somewhat later it appeared in St. Bridget's Book of Revelations.

St. Ambrose perceived in her the model of a virginal soul. St. Bernardine of Siena (d.1444) was more absorbed in the contemplation of the virginal heart, and it is from him that the Church has borrowed the lessons of the Second Nocturn for the feast of the Heart of Mary. St. Francis de Sales speaks of the perfections of this heart, the model of love for God, and dedicated to it his Theotimus.

In the second half of the sixteenth century and the first half of the seventeenth, ascetic authors dwelt upon this devotion at greater length. It was, however, reserved to St. Jean Eudes (d. 1681) to propagate the devotion, to make it public, and to have a feast celebrated in honor of the Heart of Mary, first at Autun in 1648 and afterwards in a number of French dioceses.

In 1799 Pius VI, then in captivity at Florence, granted the Bishop of Palermo the feast of the Most Pure Heart of Mary for some of the churches in his diocese. In 1805 Pius VII made a new concession, thanks to which the feast was soon widely observed. Such was the existing condition when a twofold movement, started in Paris, gave fresh impetus to the devotion.

The two factors of this movement were first of all the revelation of the "miraculous medal" in 1830 and all the prodigies that followed, and then the establishment at Notre-Dame-des-Victoires of the Archconfraternity of the Immaculate Heart of Mary, Refuge of Sinners, which spread rapidly throughout the world and was the source of numberless graces. On 21 July 1855, the Congregation of Rites finally approved the Office and Mass of the Most Pure Heart of Mary without, however, imposing them upon the Universal Church. [Excerpted from Catholic Encyclopedia, 1913 edition.]

The past few days have been quite rainy, but everyone remains in good cheer, sometimes disappointed that presentations they wished to attend are oversubscribed.

Some have also taken excursions on one or other day: I spent Thursday morning with my friend and colleague, Fr Peter Sexton, SJ making a visit to Sleaty (Sleibthe), near Carlow City, the location of the titular diocese assigned to me when I was an auxiliary bishop in Toronto--more on that in days to come.  Others have gone to Belfast to see the Titanic exhibit, to Armagh to visit previously-unknown relatives, to climb Croagh Patrick, to attend Mass this morning with Cardinal Ouellet at the shrine of Our Lady of Knock.

We are all preparing for the Statio Orbis ("the whole world pauses") closing liturgy tomorrow at Croke Park.

Meantime, some photos from the past few days: 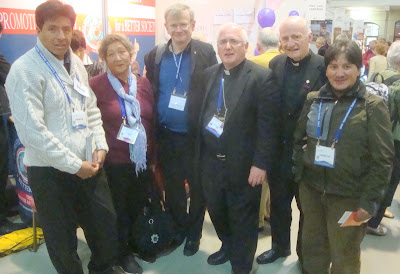 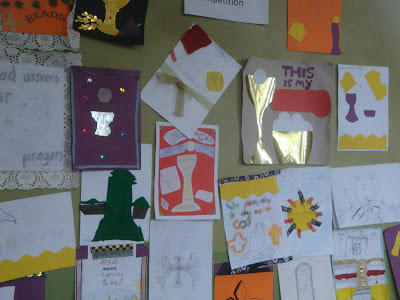 Posted by Archbishop Terry at 4:24 AM